Pascal Hartwig, Credit Product Specialist, and I provided a review of the latest trends observed across non-financial corporate firms through the lens of S&P Global Market Intelligence’s statistical models.1 In particular, Pascal focused on the outputs produced by a statistical model that uses market information to estimate credit risk of public companies; if you want to know more, you can visit here.

I focused on an analysis of how different Brexit scenarios may impact the credit risk of European Union (EU) private companies that are included on S&P Capital IQ platform.

Before, this, I looked at the evolution of their credit risk profile from 2013 to 2017, as shown in Figure 1. Scores were generated via Credit Analytics’ PD Model Fundamentals Private, a statistical model that uses company financials and other socio-economic factors to estimate the PD of private companies globally. Credit scores are mapped to PD values, which are based on/derived from S&P Global Ratings Observed Default Rates. 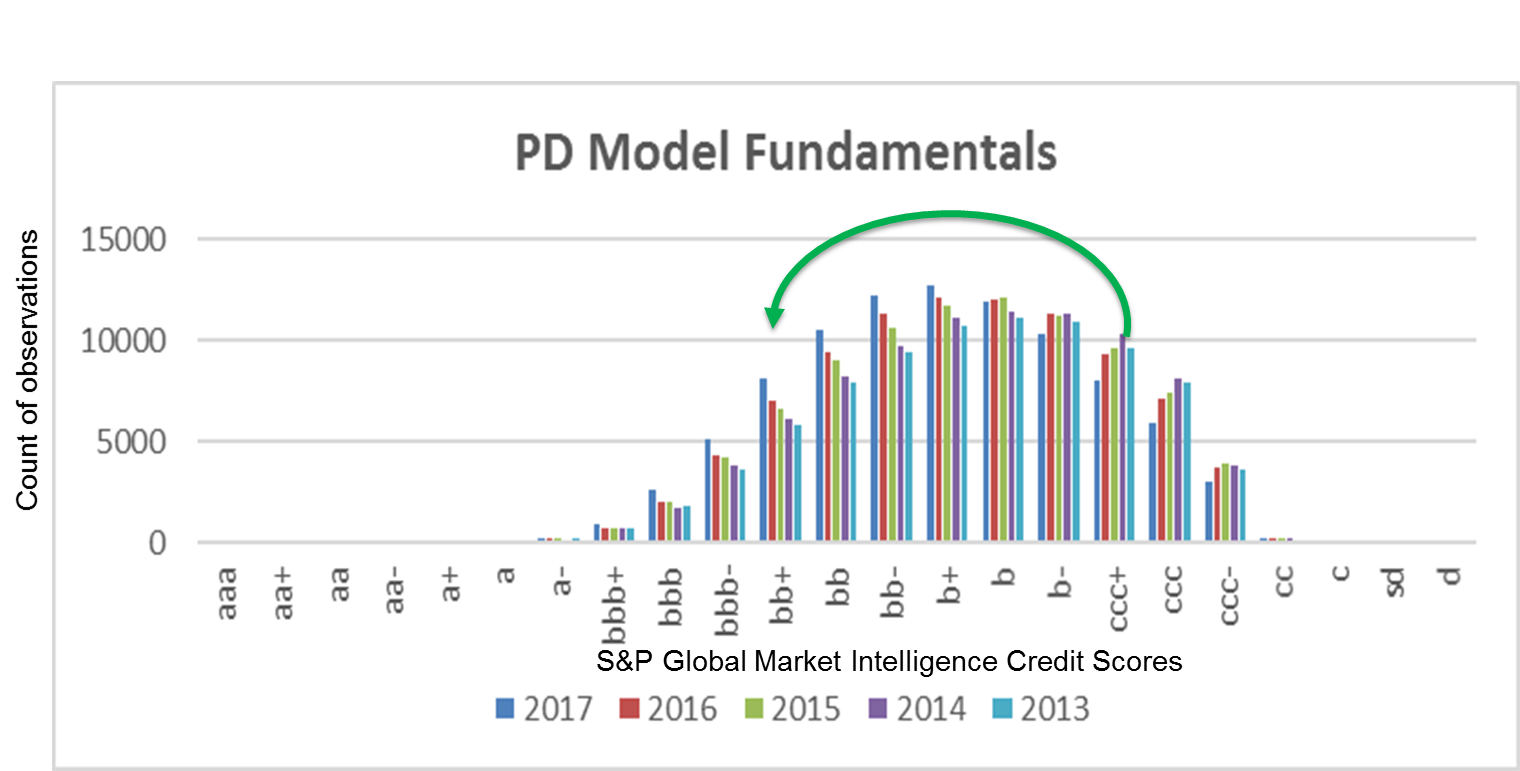 For any given year, the distribution of credit scores of EU private companies is concentrated below the ‘a’ level, due to the large number of small revenue and unrated firms on the S&P Capital IQ platform. An overall improvement of the risk profile is visible, with the score distribution moving leftwards between 2013 and 2017. A similar picture is visible when comparing companies by country or industry sector,3 confirming that there were no clear signs of a turning point in the credit cycle of private companies in any EU country or industry sector. However, this view is backward looking and does not take into account the potential effects of an imminent and major political and economic event in the (short) history of the EU: Brexit.

To this purpose, S&P Global Market Intelligence has developed a statistical model: the Credit Analytics Macro-scenario model enables users to study how potential future macroeconomic scenarios may affect the evolution of the credit risk profile of EU private companies. This model was developed by looking at the historical evolution of S&P Global Ratings’ rated companies under different macroeconomic conditions, and can be applied to smaller companies after the PD is mapped to a S&P Global Market Intelligence credit score.

“Soft Brexit” (Figure 2): This scenario is based on the baseline forecast made by economists at S&P Global Ratings and is characterized by a gentle slow-down of economic growth, a progressive monetary policy tightening, and low yet volatile stock-market growth.4 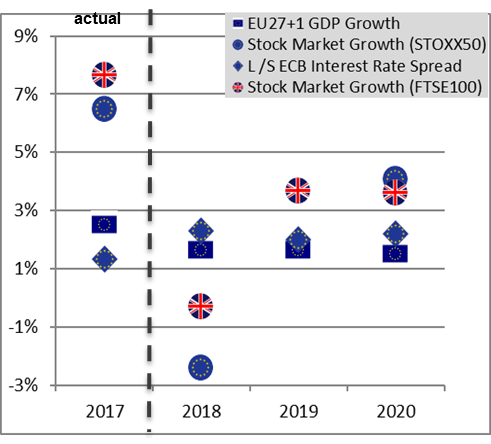 Applying the Macro-scenario model, we analyze the evolution of the credit risk profile of EU companies over a three-year period from 2018 to 2020, by industry sector and by country: 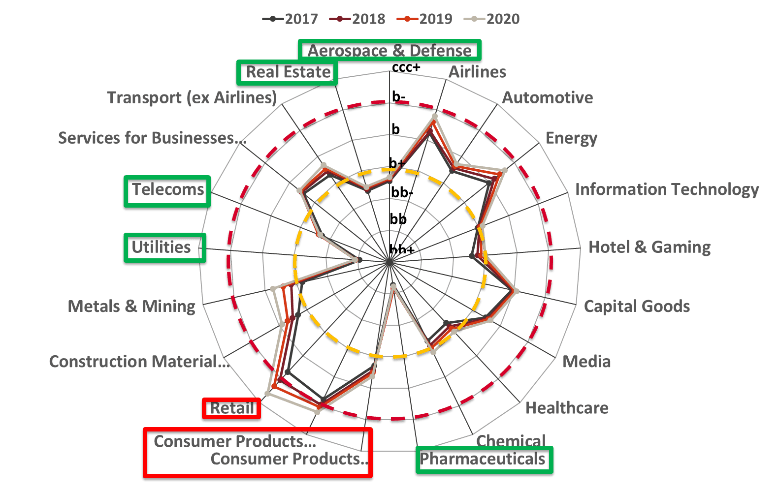 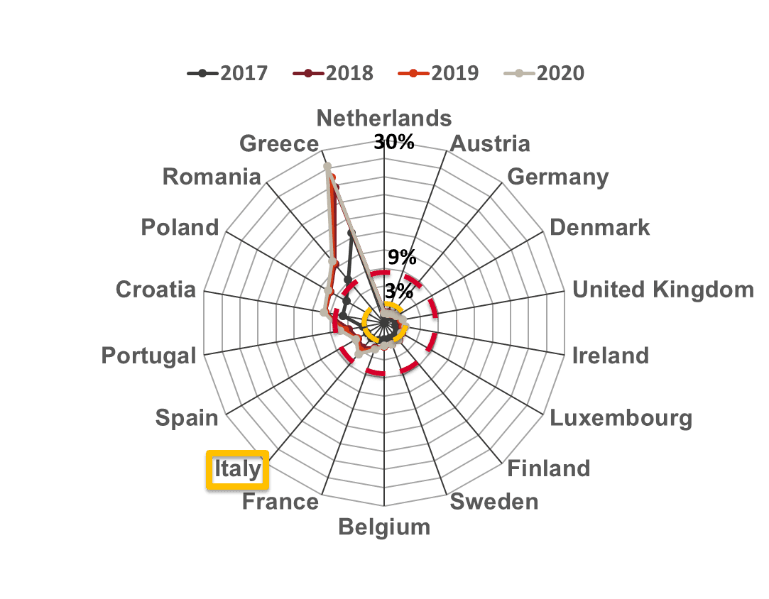 “Hard Brexit” (Figure 5): This scenario is extracted from the 2018 Stress-Testing exercise of the European Banking Authority (EBA) and the Bank of England.7 Under this scenario, both the EU and UK may go into a recession similar to the 2008 global crisis. Arguably, this may seem a harsh scenario for the whole of the EU, but a recent report by the Bank of England warned that a disorderly Brexit may trigger a UK crisis worse than 2008.8 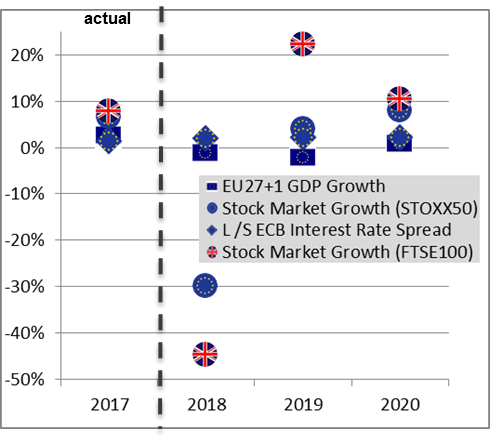 Also in this case, we apply the Macro-scenario model to analyze the evolution of the credit risk profile of EU companies over the same three-year period, by industry sector and by country: 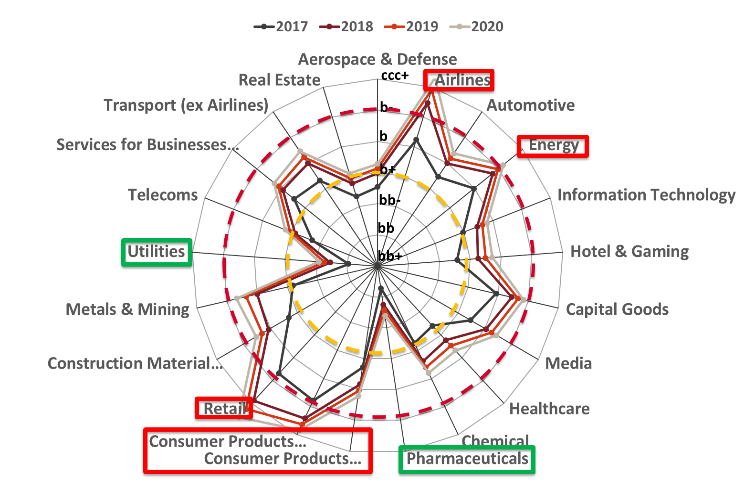 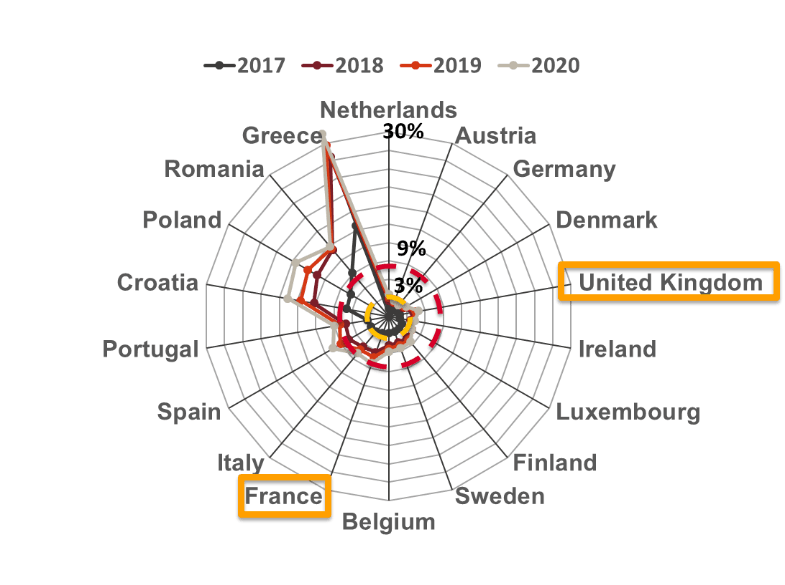 In conclusion: In Europe, the private companies’ credit risk landscape does not yet signal a distinct turning point, however Brexit may act as a pivot point and a catalyst for a credit cycle inversion, with an intensity that will be dependent on the Brexit type of landing (i.e., soft versus hard).