Our Materials Price Index (MPI) decreased 3.4% last week, the eighth decline in the past ten weeks. The decrease was broad with nine out of ten subcomponents falling. Last week's decline is further evidence of the change in commodity markets with the MPI 34% lower than its all-time high established back in early March. However, commodity prices, as measured by the MPI, remain 38% higher than the pre-pandemic level in January 2020. 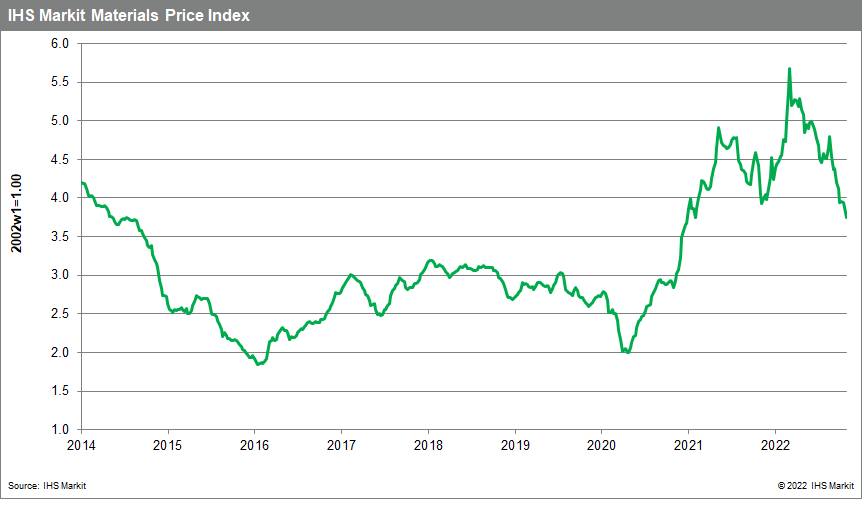 Sharp drops in iron ore were the largest contributor to the MPI's decline last week. The steel making raw material sub-index slumped 7.7%, the biggest weekly fall since early July. Iron ore prices slid to $80/tonne, the lowest level since February 2020 and a third of its all-time peak of $220/tonne in July 2021. Prices tumbled due to the continued poor outlook for mainland China's construction sector, which has significantly reduced steel consumption and therefore iron ore demand. Mainland China's property market is in a slump with house prices and development rates sharply down and markets are not expecting a change in the near term. With supply relatively healthy there is little upward price pressure on iron ore and price levels are expected to fall further. Poor construction prospects also impacted other commodities last week with US lumber prices down 8.4%. Prices are now 70% below February this year as higher interest rates curb residential housing demand. Recent production cuts announced by sawmills have so far done little to arrest the slide in lumber prices.

Prospects for slower demand continue to weigh on commodity prices, with central bank actions last week further harming market sentiment. The Federal Open Market Committee (FOMC) raised the target for the federal funds rate by 75 basis points to a range of 3¾% to 4%, the fourth increase of that magnitude. Since March, the FOMC has raised the policy rate by 3.75 percentage points. Further increases are certain as the FOMC continues to battle inflation. In addition, the Bank of England (BoE) raised its Bank Rate for an eighth meeting in a row, to a 14-year high of 3.0%. With markets expecting central banks to continue aggressively targeting inflation the demand environment for commodities remains bearish. Since weak demand is expected to dominate price movement in the near term, lower commodity prices foretell a welcome slowdown in goods price inflation into 2023.