Week Ahead Economic Preview: Week of 2 May 2022

A busy week ahead packs both manufacturing and services PMI data releases for April to provide an update on the health of the global economy alongside central bank policy meetings at both the US Federal Reserve and the Bank of England. Meanwhile April's US labour market report will be released on Friday with a string of inflation figures also due from APAC economies.

Despite some positive earnings surprises posted so far from US corporates, the global equity market remains weighed by concerns over multi-decade high inflation rates, rising interest rates and slowing global growth (see special report). The issue of slowing demand growth had become particularly prominent with new COVID-19 disruptions in mainland China and the Russia-Ukraine war. Further clues on the impact of these headwinds will be gleaned from the upcoming manufacturing and services PMI releases for April.

The focus also shifts to the central bank meetings, where policymakers in the US, UK and Norway are set to meet. In particular, the Fed and Bank of England are expected to continue on their rate hike cycles and any updates on their future policy paths will be closely watched amid growing worries that rising interest rates would hurt growth. As it is, April flash PMIs have already suggested that economic growth slowed in the US and UK as the strong pandemic rebound showed signs of fading.

In the official data docket, the April US jobs report will be the highlight. Consensus expectations point to strong job additions for April while the unemployment rate remains low, consistent with the Fed to continuing on their rate hike path.

Meanwhile CPI figures across various APAC economies including Taiwan, Thailand and the Philippines will be released. Early flash PMI data from neighbouring Japan and Australia suggested that worsening price pressures persisted amid the Ukraine war and China lockdowns, further weighing on business sentiment and adding to cost of living concerns in April.

Manufacturing PMIs due out in the coming week will be an important steer to commodity prices. Pandemic-related supply shortages coupled with rebounding demand have led to surging prices, with IHS Markit Materials Price Index (MPI) increasing 2.2% last week as the war in Ukraine and lockdowns in China further fanned fears of persistent supply shortages.

However, while supply appears to have deteriorated in April, the demand side of the equation is more uncertain: note that the March PMIs showed global manufacturing output growth slumped to an 18-month low, led by a slowdown in growth of new orders and a fall in global trade. The output and new orders indices from the global manufacturing PMIs will need to be watched alongside the suppliers' delivery times index to get a comprehensive steer on the demand and supply fundamentals for commodity prices. 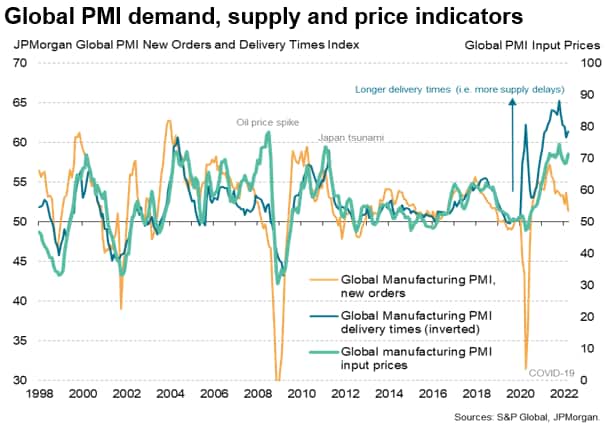 One area of inflation that will be less susceptible to any cooling of industrial demand is of course food. The Russian invasion of Ukraine has exacerbated food inflation globally. Both countries are traditionally major exporters of agricultural commodities, but sanctions and the war itself have disruption global supplies of wheat, corn, and vegetable oils, sending prices soaring (read more in our Special Report on Food and Ag Commodity Inflation). The detailed sector PMI data showed food industry producer selling price inflation at an all-time high in March, and any further surge in global food price inflation will add to already-worrying cost of living pressures for those on lower incomes and developing countries.

April PMI figures will be released in the coming week for a detailed assessment of the growth situation after March data revealed slowing global growth. A boost from the pandemic reopening of western economies helped to cushion some of the blow from the Ukraine war and Omicron disruptions in March. With that said, flash April data showed that a further surge in price pressures weighed on the global growth outlook. Full details of the global growth and inflation conditions will be anticipated with next week's data releases.

Refer to our calendar for the full list of April PMI data and their release dates.

The Fed convenes 3-4 May to update their monetary policy with the consensus currently pointing to a 50 basis points (bps) hike following the 25bps hike implemented in March. According to the CME Fed Watch tool, the market has fully priced in the 50bps hike for May and expects a further five to six 25bps hikes before the end of year. While no updates to economic projections will be anticipated in the upcoming meeting, the post meeting statement and Fed chair Jerome Powell's press conference will be closely watched for the Fed's rhetoric with recent concerns about inflation, slowing global growth and the implications of policy tightening.

April's labour market report will follow on Friday with the consensus suggesting a strong 400k addition to non-farm payrolls and unemployment rate to stay unchanged at 3.6%.

The Bank of England (BOE) convenes for the third time this year and is set to implement its fourth successive hike at 25bps according to consensus. April's flash UK PMI survey pointed to rising inflationary pressures, backing the BOE's tightening stance. That said, signs of cooling economic growth had also been signalled, which may be further pressured by rising interest rates.

In APAC, a string of April CPI numbers will be anticipated across Taiwan, the Philippines and Thailand in addition to the PMI numbers. Further signs of rising price pressures amid the ongoing supply issues will be watched with the release of these figures.