Some of the confusion over varying US survey signals was lifted after official data showed manufacturing output rebounding 1.1% in November, confirming the picture presented by the IHS Markit's PMI data. December flash PMI data meanwhile point to a further stabilisation of production.

The manufacturing output index from the IHS Markit PMI survey had risen to a ten-month high of 53.7 in November, indicating that the goods-producing sector continued to gain growth momentum for a fourth successive month after having slumped earlier in the year.

The improvement in the IHS Markit index contrasted with continued weakness in the ISM survey, where at 49.1 the November production index remained at its third-lowest since May 2009, albeit picking up from lower readings in September and October. The resulting gap between the two surveys in recent months, in terms of the weakness of the ISM index relative to the equivalent IHS Markit index, has been the largest ever recorded. 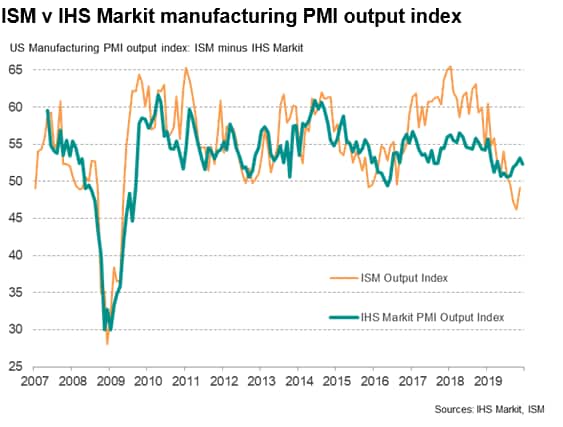 To draw meaningful conclusions from the survey indices we use regression analysis to compare the surveys against historical official data produced by the Federal Reserve. From these regressions we can derive comparable implied official growth rates from the two surveys [*]. These regressions reveal that since 2008 the IHS Markit index has exhibited a closer fit with the official data than the ISM has, the respective adjusted r-square values being 0.79 and 0.69.

The regressions also indicate that the IHS Markit production index is running at a level consistent with an average 0.3% quarterly rate of decline in the fourth quarter while the ISM index is consistent with a 1.7% rate of quarterly decline. By comparison, the official data from the Fed so far in the fourth quarter are running 0.4% behind the third quarter despite the November rebound, which is clearly far closer to the IHS Markit signals than the much-weaker ISM survey. 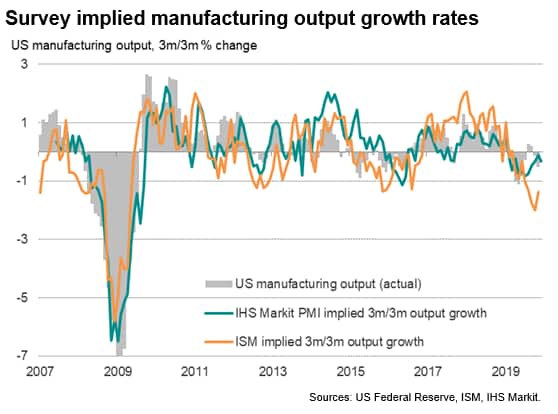 Looking in more detail at the latest official numbers, the 1.1% rebound in production in November partly reflected the return to work for striking GM workers after plant closures in October, which in turn contributed to a 0.7% drop in manufacturing output in October. However, even excluding autos, manufacturing output rose 0.3% in November, correlating well with the relatively robust IHS Markit signals. Moreover, the December flash PMI data from IHS Markit indicate that the sector continued to show signs of stabilisation from the soft patch seen earlier in the year, albeit losing a little momentum compared to November. 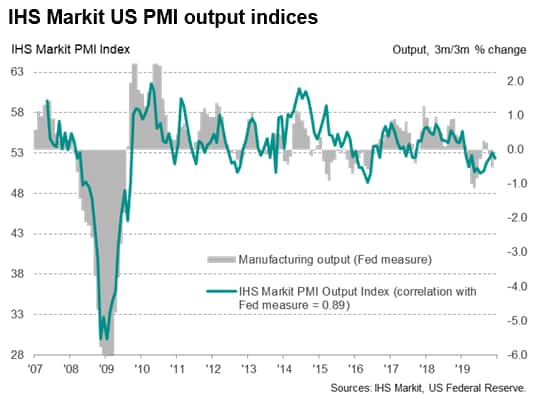 To help explain why the surveys differ we need to look closer at the methodologies:

Put all of the above factors together and it becomes clearer as to why the ISM data may have exaggerated US manufacturing in 2017 and 2018, and why it is now possibly overstating the weakness.

*Note that rather than compare the surveys with month-on-month changes in official data, which show considerable volatility, we compare the surveys with a rolling three-month rate of change in the official data (i.e. the change in output in the latest three months compared to the prior three months). This has the advantage of highlighting the growth trend in the official data while avoiding (a) the volatility of the monthly data and (b) the induced lag of annual growth rates.