Global downturn moderates in May as COVID-19 lockdowns ease

Global business activity contracted sharply in May, according to the latest PMI business survey data, dropping for a fourth successive month. Encouragingly, the rate of decline eased markedly since April's record decline as economies around world continued to battle to contain the COVID-19 pandemic, albeit remaining the second steepest in over two decades.

The JPMorgan Global PMI™ (compiled by IHS Markit) showed a record surge of just over 10 index points in May from 26.2 in April to 36.3, but remained well below the 50.0 no change level to indicate a fourth successive monthly drop in output across the combined manufacturing and service sectors.

Despite the rise in the index during May, the latest reading remained even lower than the prior-pandemic record low of 36.8 seen at the height of the global financial crisis in February 2009. 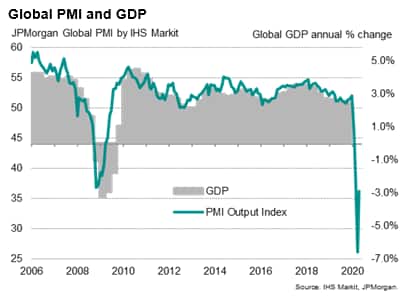 The May reading is historically comparable with global GDP falling at an annual rate of approximately 3% (at market prices), down dramatically from a contraction rate of almost 7% signalled back in April.

The latest data were collected between 12th-27th May, encompassing a time when the vast majority of the countries surveyed relaxed measures to contain COVID-19 outbreaks to varying degrees. IHS Markit's COVID-19 Containment Index, based on information relating to issues such as closures of schools, non-essential shops and restaurants, as well as restrictions on public gatherings, internal mobility and external borders, fell globally from 58 in April to 50 in May. These indices are based on 100 meaning very severe restrictions and zero being no restrictions. 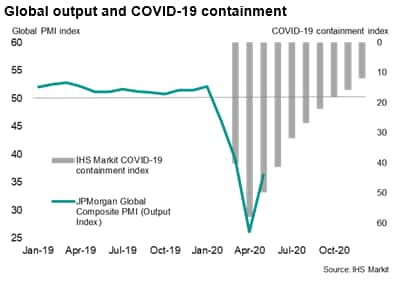 The global PMI data showed rates of decline easing in both manufacturing and services, though the latter continued to suffer the steeper rate of contraction, linked to its greater exposure to widespread measures to help prevent healthcare systems from being overwhelmed by the spread of the coronavirus. Measures have not only caused temporary business closures but have also led to supply delays and have hit global demand from both consumers and businesses for a wide variety of goods and services, hurting hospitality, travel and tourism and retail sectors especially due to social distancing policies.

The overall drop in global service sector output was the second largest in 22 years of data collection, exceeded only by that seen in April.

Manufacturing output likewise continued to fall steeply, the rate of decline cooling from April's 11-year high but remaining in a deeper downturn than at any time since the global financial crisis. While many companies around the world saw production restart after lockdown-related closures, many others reported that demand conditions continued to worsen. 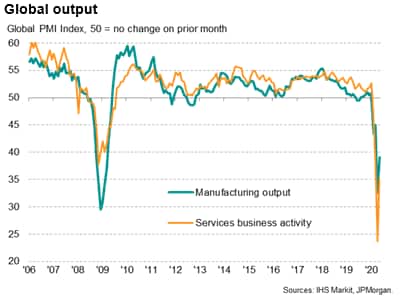 China bucks downturn in May

All major developed and emerging economies contracted at steep rates with the notable exception of China, where output of the combined manufacturing and service sectors rose at the fastest rate since January 2011. The upturn in China was the first expansion seen since January, thereby providing first signs of recovery since February's record fall which resulted from the imposed lockdown. 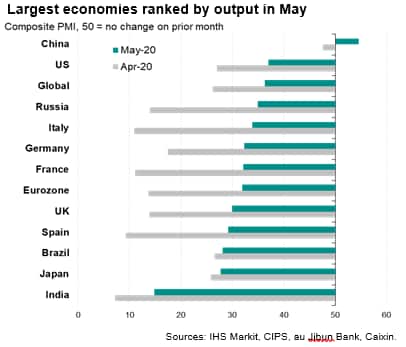 All other major countries saw downturns moderate in May from record rates of contraction in April, generally coinciding with an easing of lockdown measures from peaks in April. The US reported the mildest downturn, while India reported the steepest contraction.

Output linked to degree of lockdown

In general, the change in output in May largely reflected the extent of the coronavirus lockdown measures applied in each country. Of the largest economies, China saw the least severe COVID-19 containment measures in May while India saw the strictest.

Japan appears to have fared badly in terms of the extent to which output fell in May despite seeing relatively moderate virus containment measures, but this could reflect Japan's greater exposure to the recent collapse in global trade and greater voluntary social distancing than in many other countries. 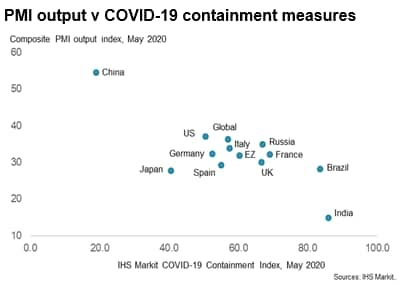 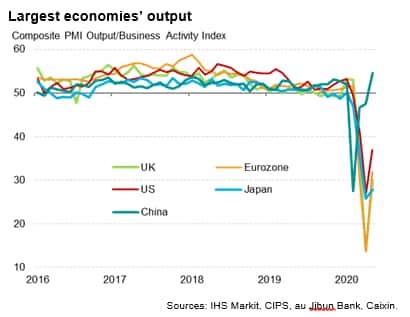 The renewed expansion in China is especially interesting as a potential guide to output in other countries in coming months, as China relaxed its lockdown measures earlier than other economies and has now seen both manufacturing and services return to growth. The former rose for a third successive month in May while the latter showed an improvement for the first time since January. Perhaps most encouragingly, inflows of new business in the service sector rose to an extent not seen since September 2010 as more businesses opened and social distancing measures were eased. 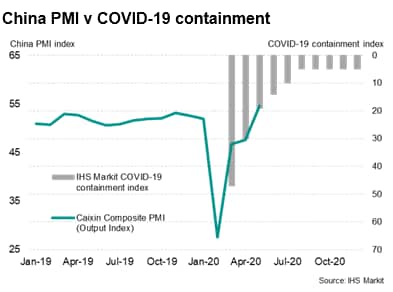 A concern, however, is that China's recent growth has been entirely driven by the domestic market. In contrast, new orders for exports of goods and services in China both continued to fall at steep rates in May, which reflected the wider global economic malaise. Other countries, struggling to recover from virus lockdowns, will likely see high unemployment act as a dampener on recoveries. Comparisons of PMI survey employment indices highlight how China's labour market has not seen anything like the ravaging that has occurred in countries such as the US, UK and Eurozone, with only Japan sharing a more muted rate of job losses. These heightened job losses will inevitably act as a greater brake on economic recoveries than seen in China. 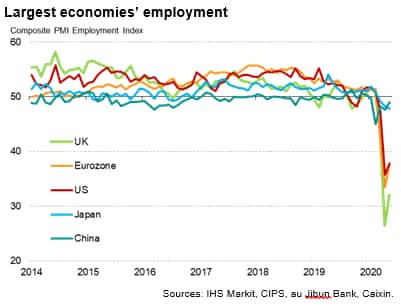