A disappointing flash eurozone PMI for May adds further to the suggestion that the robust pace of economic growth seen in the first quarter will prove temporary.

The Markit Flash Eurozone PMI - which is based on approximately 85-90% of normal final monthly replies - slipped to a 16-month low of 52.9 in May, down from 53.0 in April. Economists were expecting an improvement to 53.2, according to a Reuters poll. Expectations were exceeded in both France and Germany, leaving the survey data suggesting that the 'periphery' underperformed relative to expectations.

The latest two months' weak data imply that economic growth has likely slowed in the second quarter, down to a pace of just 0.3% (or 1.2% in annual terms). 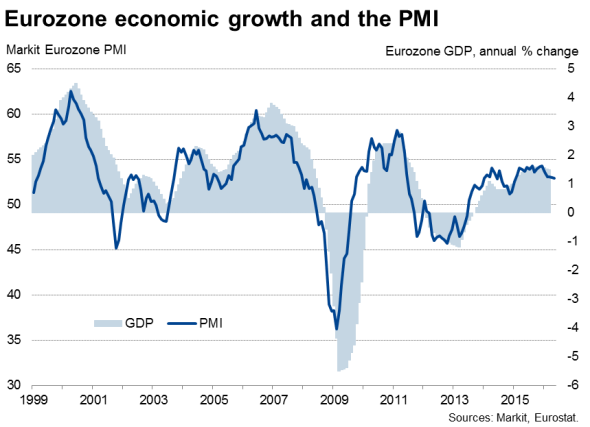 The forward-looking indicators also suggest that growth is more likely to weaken further than accelerate. Inflows of new work showed the smallest rise for nearly a year-and-a-half, while optimism about the business outlook in the service sector sank to its lowest since July 2015.

There are signs of improving life in the 'core' countries of France and Germany, led mainly by their service sectors, as manufacturing continued to struggle. The German 'composite' PMI hit 54.7, well above expectations of a more modest rise to 53.8. In France, the composite PMI reading of 51.1 beat expectations of the index edging higher to 50.2.

However, while the survey points to a fairly robust 0.4-0.5% second quarter GDP expansion in Germany (almost 2% annually), France appears to be growing at a far more modest 0.2% (0.6% annual) pace. Furthermore, elsewhere in the region the rate of expansion slowed to its weakest for almost one and a half years. 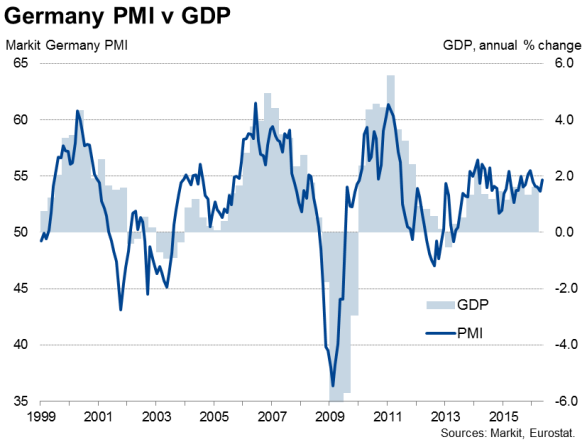 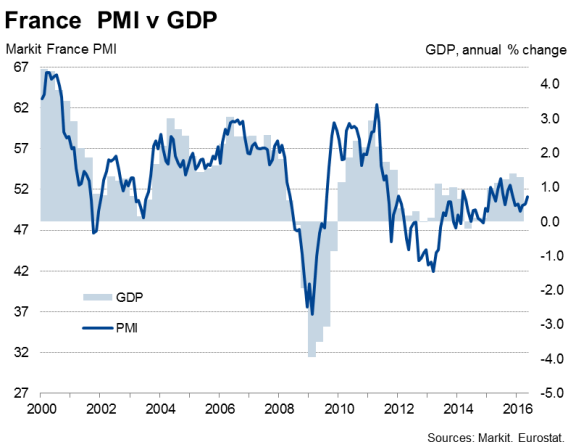 The PMI survey therefore paints a picture of a region stuck in a low-growth phase, managing to eke out frustratingly modest output and employment gains despite various ECB stimulus 'bazookas', a competitive exchange rate and households benefitting from falling prices.

The central bank announced a major stimulus initiative in March, but the impact - according to the survey data - has so far been underwhelming. However, some aspects of the plan, notably the ECB's move into the purchasing of corporate bonds and a new tranche of cheap bank loans, have not yet begun. Hence policymakers are taking a wait-and-see approach before deciding on the need for other measures, and putting greater pressure on governments and EU institutions to complement the monetary stimulus with structural reforms and looser fiscal policy, where possible, according to the minutes of the April governing council meeting.