Monterey, CA, Oct. 03 2019 — U.S. broadcast station mergers and acquisitions (M&A) volume reached a total of only $215.1 million in the third quarter of 2019 as tracked by Kagan, a media research group within S&P Global Market Intelligence. This is the lowest quarterly deal volume since the fourth quarter of 2016.

In the radio business, the largest deal of the quarter took place in New York, where Emmis Communications Corp. partnered with investment firm Standard General L.P. and founded a new public company, Mediaco Holding, which will own and operate Emmis FM stations WBLS and WQHT. Standard General will pay $91.5 million in cash and a $5 million note receivable to Emmis, while Emmis will have a 23.7% minority stake in the new company.

The second-largest deal was Stephens Media Group’s acquisition of Mapleton Communications, which agreed to sell its 29 FM and eight AM stations, together with a number of boosters and translators, for $21.0 million. 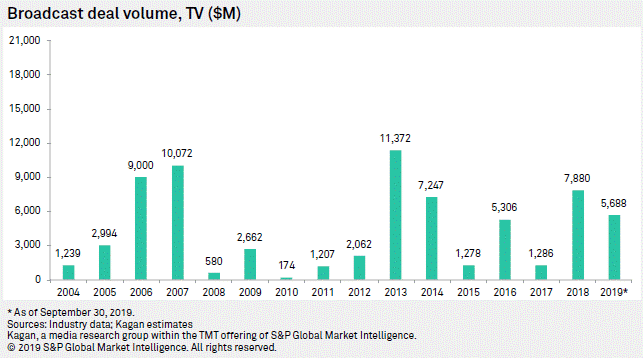 In the TV sector, the only major deal of the quarter was the announced sale of KMBH-DT in Harlingen, Texas, from MBTV Texas Valley LLC to Entravision Communications Corporation for $2.9 million.