London, Apr. 29 2019 — The latest Private Equity Market Snapshot (PEMS) report from S&P Global Market Intelligence shows healthy capital inflow into the Europe, Middle East and Africa (EMEA) region as total General Partners (GP) investments has risen by 14 percent to €21 billion from January 1 to March 15, 2019. This is a positive indication for the region when compared to €18.4 billion capital deployed, across different sectors, over the same period in 2018.

There was a robust appetite to invest not only in the wider EMEA region, but the UK in particular. Despite the current uncertainties around Brexit, UK targets have maintained a strong position with global GPs, having received almost twice the amount of capital investments compared to the same period in 2018. Largely responsible for the rise in aggregate deal value were two mega-deals in the UK Real Estate sector. Undeterred by a fall in aggregate deal value, Information Technology (IT) sector retained its top spot with €5.4 billion worth of GP investments obtained through 329 deals.

Data as of March 15, 2019. Source: S&P Global Market Intelligence. For illustrative purposes only. 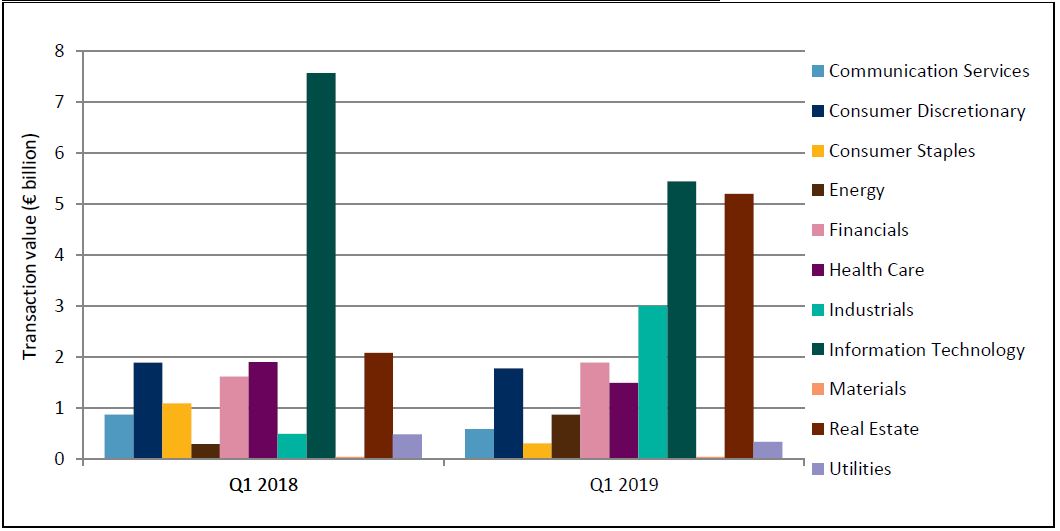 Data as of March 15, 2019. Source: S&P Global Market Intelligence. For illustrative purposes only.

The Benelux maintains its steady state

The report reveals the capital deployed into Benelux (Belgium, Netherlands and Luxembourg) has grown steadily each year since 2015, increasing by 50 percent from 2017 to 2018 to a total of €23.6 billion. The IT sector consistently led the way with 490 deals during the period of January 1, 2014 to December 31, 2018. It equated to 29 percent of the total number of entry deal activities. The Netherlands was the driving force achieving 69 percent of all IT deals.

Over the study period from January 1, 2014 to December 31, 2018, global insurance industry has seen a robust interest from private equity players, driving the markets to record highs last year. As more deals were closed in 2018, the value of closed deals soared to €12.6 billion, representing a remarkable 229 percent increase over the average from 2014 to 2017. However, the same enthusiasm is not shared for the Insurance Technology (Insurtech) sector. EMEA headquartered Insurtech companies attracted only 18.4 percent (€1.5 billion) of total GPs capital in this sector over the entire study period.

Full report can be viewed here

EMEA Private Equity Market Snapshot is a quarterly publication focusing on the private equity (PE) market in Europe, the Middle East and Africa (EMEA) from S&P Global Market Intelligence. If you would like to receive previous reports, please contact: pressinquiries.mi@spglobal.com.