To a large extent, both TV and radio deal volume were driven by spinoffs resulting from the mergers of Entercom Communications Corp. and CBS Radio (February 2017) and of Gray Television Inc. and Raycom Media Inc. (June 2018). 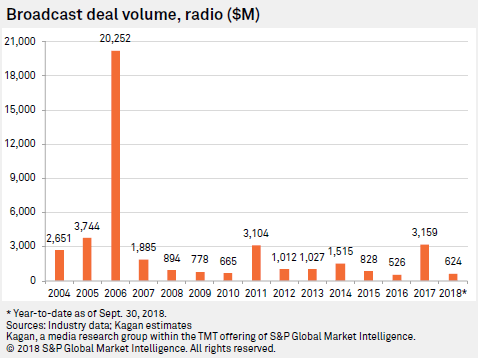 After the closing of the Entercom/CBS Radio merger in November 2017, eight radio stations in the San Francisco and Sacramento, Calif., markets were placed in an FCC disposition trust. In August 2018, the stations were sold to Bonneville International Corp. for $141.0 million, or 8.0x forward seller’s cash flow.

Entercom also sold Country-FM WXTU in Philadelphia to Beasley Broadcast Group Inc. for $38.0 million and bought the much larger Adult Contemporary FM station WBEB in the same market from Jerry Lee Radio LLC for $57.5 million. To date, these two transactions are the largest single-station radio deals of 2018. 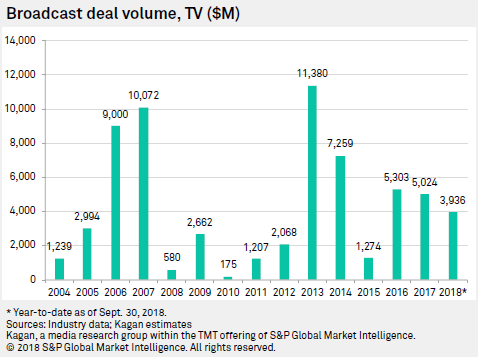 Another $71.0 million of the radio deal volume is attributable to E.W. Scripps Co.’s exit from the radio business. Scripps sold the first five of its 34 radio stations in the second quarter. The remaining stations were sold in the third quarter to three different buyers. The largest part was the $47.0 million sale of 19 stations to SummitMedia LLC.

On September 27, Alpha Media announced an agreement in principle to sell its six stations in Florida’s West Palm Beach market to Hubbard Radio. With no details disclosed and no announcement filed with the FCC by the end of the third quarter, this will potentially represent the fourth quarter's first large radio deal.

In addition to the Gray spinoffs, Raycom acquired the licenses of two stations, which it had operated under shared services agreements, from two license owners for a total of $16.77 million. Nexstar Media Group Inc. purchased the license of KRBK in the Springfield, Mo., market from Koplar Communications LLC for $16.45 million. Nexstar was already operating the station under a local marketing agreement.

In Kagan’s second quarter summary, released July 2, a number of spinoffs were reported following the merger of Tribune Media Co. and Sinclair Broadcast Group Inc. These transactions amounted to $1.48 billion. On July 16, the FCC raised serious concerns about the merger and the spinoffs and recommended that an administrative law judge review the deal. Subsequently, in August, the Sinclair/Tribune merger and all its spinoffs were cancelled.

About S&P Global Market Intelligence
At S&P Global Market Intelligence, we know that not all information is important—some of it is vital. Accurate, deep and insightful. We integrate financial and industry data, research and news into tools that help track performance, generate alpha, identify investment ideas, understand competitive and industry dynamics, perform valuations and assess credit risk. Investment professionals, government agencies, corporations and universities globally can gain the intelligence essential to making business and financial decisions with conviction.