New York, NY, Oct. 30 2020 — U.S. broadcast station mergers and acquisitions (M&A) volume reached a total of $534.7 million in the third quarter of 2020 as tracked by Kagan, a media research group within S&P Global Market Intelligence. This level of activity constitutes a substantial rebound from $90.3 million in the second quarter, an all-time low attributable to the COVID-19 pandemic. 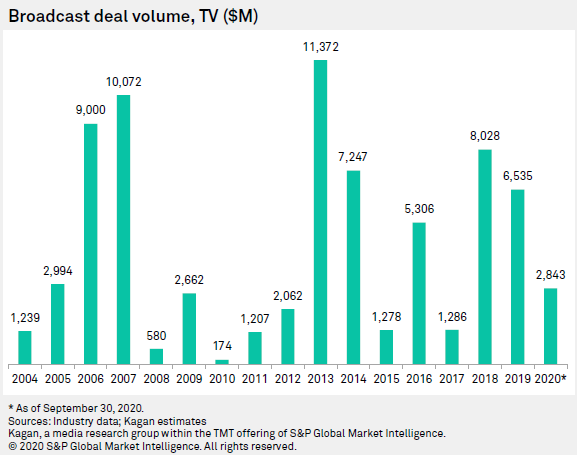 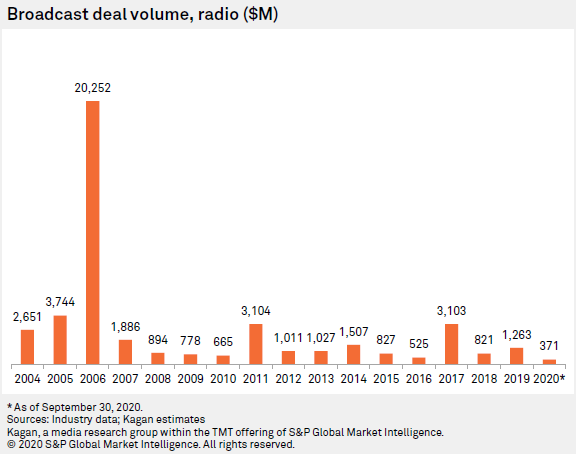 The second-largest TV deal was a purchase option for New York's WPIX-DT. In July, Nexstar Media Group Inc. transferred that option to its partner Mission Broadcasting Inc., which exercised the option for $75 million plus accrued interest.

In the quarter's largest deal involving a single TV station, TEGNA Inc. in September announced the purchase of Estrella Media Inc.'s KMPX-DT in the Dallas-Ft. Worth market for $19.0 million.

The top radio deal of the quarter was the announced $8.5 million sale of New York AM station WWRL, coming with an FM translator, from NJ Broadcasting LLC to iHeartMedia Inc.

The second- and third-largest radio deals of the quarter both took place in the non-commercial realm, with Educational Media Foundation Inc. the buyer in both deals. In July, Educational Media Foundation announced the $3.4 million purchase of nine FM stations from entities owned by George Flinn Jr. In September, in the largest single-station deal of the quarter, CRISTA Ministries announced the sale of FM station KFMK in the Austin, Texas, market for $6.0 million or $2.67 per pop.

63% of the quarter's deal volume came from the top deal, Scripps' acquisition of ION. Still, the other 123 transactions in the third quarter added $196.7 million to the total. That total amounts to more than twice the total second-quarter volume.

At S&P Global Market Intelligence, we understand the importance of accurate, deep and insightful information. We integrate financial and industry data, research and news into tools that help track performance, generate alpha, identify investment ideas, perform valuations and assess credit risk. Investment professionals, government agencies, corporations and universities around the world use this essential intelligence to make business and financial decisions with conviction.