Monterey, Calif., Jul. 06 2020 — U.S. broadcast station mergers and acquisitions (M&A) volume reached a total of $90.9 million in the second quarter of 2020 as tracked by Kagan, a media research group within S&P Global Market Intelligence. This constitutes the sector's lowest quarterly deal volume in Kagan’s records, which go back 37 years to 1983.

While first quarter results were largely unaffected by the current crises caused by the COVID-19 outbreak, the deal market all but collapsed in April.

This transaction, negotiated largely before the COVID-19 outbreak, accounts for more than half (53.9%) of the second quarter's total U.S. broadcast M&A volume.

On May 28, four companies, fully or partially owned by Mr. George S. Flinn, Jr., announced the sales of their six TV stations to Radiant Life Ministries, Faith Community Television and Memphis Educational Television for a total of $5.7 million. On the same day, Gray Television reported the acquisition of two low-power TV stations in Alaska for $1.5 million.

Those were the only noteworthy TV transactions in the second quarter. We do not expect the TV M&A market to pick up again with large transactions until after the November 2020 elections.

The radio market had even less to report. In a forgiveness of about $3.0 million in debt, three FM stations in or near the St. Louis, Mo., market were transferred from Mr. Dennis Wallace to East Central Broadcasting LLC.

Only four other transactions exceeded $1 million each. 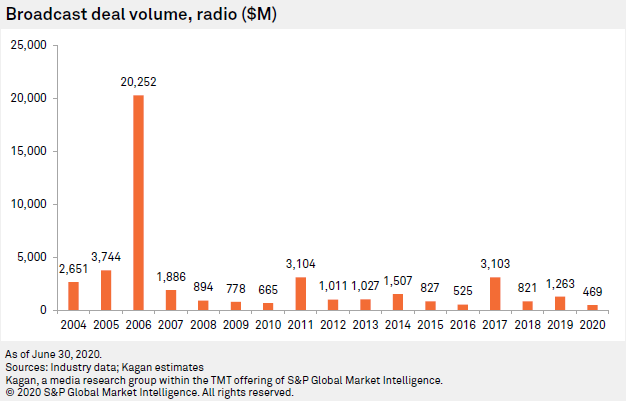 In the Philadelphia market, VP Broadcasting announced the acquisition of an AM station with an FM translator from Aztec Capital Partners for $1.5 million.

In the small La Crosse, Wis., market, an AM/FM combo is being sold from Mississippi Valley Broadcasters LLC to Magnum Communications Inc. for $1.4 million.

A non-rated AM/FM combo with two FM translators in non-rated Washington, Ind., is going to be sold from DLC Media Inc. to Shake Broadcasting LLC for $1.35 million.

There were another 88 radio transactions in the second quarter, but none of them exceeded a million dollars and more than three quarters of them (67) took place in small markets and non-rated areas. Depending on the duration of the current situation, we expect a growing number of small radio station owners to exit the business, but we also expect a swift return to larger transactions once the crisis is resolved.