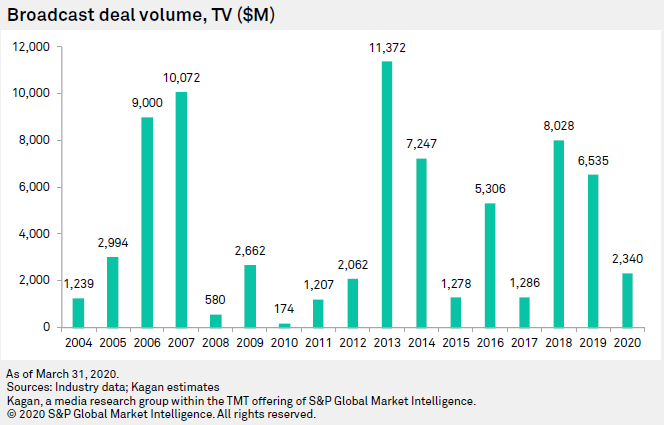 U.S. broadcast station mergers and acquisitions (M&A) volume reached a total of $2.64 billion in the first quarter of 2020 as tracked by Kagan, the media research group within S&P Global Market Intelligence. 94.4% of this volume is attributable to Kagan’s $2.49 billion estimate for the 64% buyout of Univision Holdings Inc.

“Given the current environment, we expect radio revenues to recover quickly which should have a positive effect on M&A activity in the quarters to come,” said Volker Moerbitz, Research Analyst at Kagan, a media research group of S&P Global Market Intelligence.

First quarter results were largely unaffected by the current crises caused by the COVID-19 pandemic. In light of current events, Kagan expects a steep decline for the broadcast deal market, but also a steep recovery after the resolution of the crisis.

For example, throughout February and March, TEGNA Inc. received several offers for all of its 66 TV stations. That could harbinger a first large deal announcement after the COVID-19 pandemic. 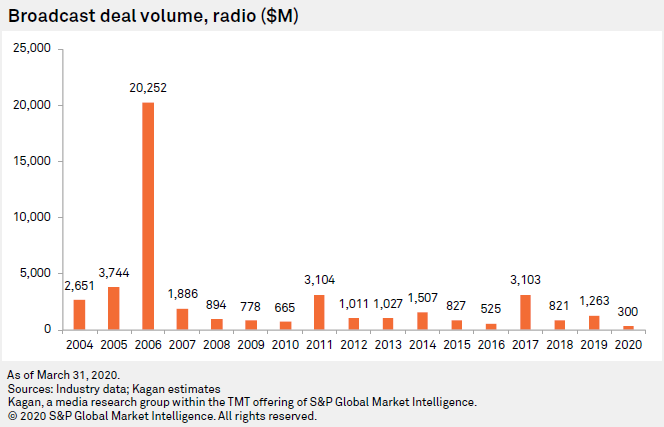 Prices for the top TV transaction, in which Searchlight Capital Partners LP and ForgeLight LLC will acquire a 64% stake in Univision Holdings Inc., were not publicly disclosed. Based on estimates for Univision's 2020-2021 average cash flow, Kagan values Univision's 58 radio stations at $408.3 million and its 52 TV stations at $3.48 billion. That represents 52.3% of the station value that Kagan estimated for Saban Capital Group Inc.'s buyout of Univision in 2006.

Aside from the Univision buyout, Kagan estimated the first quarter's largest TV transaction was a settlement between Tribune Media and Sinclair Broadcast Group, in which Nexstar Media Group, the new owner of Tribune Media, will receive Sinclair's FOX affiliate WDKY-TV in the Lexington, Ky., market, along with "certain assets" of CBS affiliate KGBT-TV in Harlingen, Texas, together with a $60 million cash payment.

The first quarter's largest TV deal announcement with a disclosed price was the $15 million sale of Mega-TV affiliate KTBU-TV in the Houston, Texas, market, from Spanish Broadcasting System Inc. to TEGNA Inc.

In the radio market, the first quarter's three largest deal announcements, aside from Univision, all happened in the religious broadcasting sector.

Additionally, Word Broadcasting Network Inc. is exercising a $4 million purchase option to acquire one FM and two AM radio stations — coming with two translators — in Louisville, Ky., from Salem Media Group Inc. WBN has operated the stations under a local marketing agreement since 2016.

Throughout the first quarter, aside from Univision, only nine registered U.S. radio transactions were worth more than $1 million. According to Kagan’s records, that represents the fewest million-dollar radio deals in any quarter since the second quarter of 1984.