Monterey, California, Jul. 01 2019 — U.S. broadcast station mergers and acquisitions (M&A) volume reached $1.61 billion in the second quarter of 2019 as tracked by Kagan, a media research group within S&P Global Market Intelligence. For the first time since the third quarter of 2015, the deal market registered a $1 billion deal volume without any single deal totaling more than $1 billion. That indicates a solid number of large broadcast deals of all kinds. 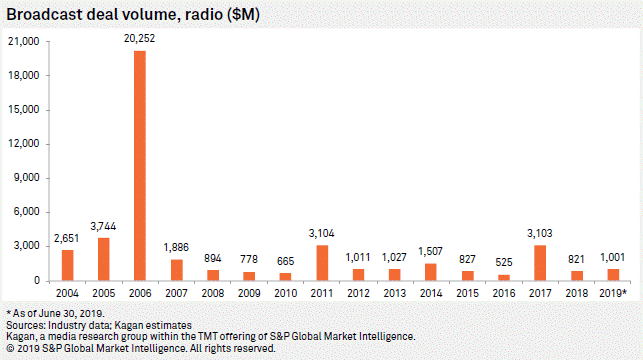 The $42.5 million sale of two Indianapolis, Ind., TV stations from Nexstar Media Group Inc. to Circle City Broadcasting I Inc. in April concluded the spinoffs following Nexstar’s merger with Tribune Media Co. All large deals after that were individual sales of one or two stations.

In the top TV deal of the month, TEGNA Inc. acquired WTHR, the NBC affiliate in Indianapolis, and WBNS-TV, the CBS affiliate in Columbus, Ohio, from Dispatch Broadcast Group. The total price of $535.0 million included WBNS AM/FM; we allocated $517.0 million of the total to the TV properties.

The quarter's third-largest TV deal by volume was an $83.0 million cash deal in which McDermott Communications LLC bought two ABC affiliates — WLNE-TV in New Bedford, Mass., and KLKN in Lincoln, Neb., from Citadel Communications LLC (not related to the former Citadel Broadcasting Corp.).

The top radio deal of the quarter was announced just a few days before the end of the quarter. On June 26, Cox Enterprises announced an agreement with a broadcasting company substantially owned by Apollo Global Management.

So far, no price has been announced for the Cox purchase. At forward cash flow multiples between 6.0x (for the AM stations) and 7.0x (for the FMs), we estimate the radio properties to be worth around $550 million, which is the number we have applied to the quarterly total.

The quarter's second- and fourth-largest radio deals both took place in Los Angeles. On April 15, Meruelo Group LLC paid $43.0 million to Cumulus Media Inc. for KLOS-FM. Six weeks later, on May 28, Meruelo also announced the acquisition of KXOS, paying $34.0 million in cash to 93.9 Investment LLC and $1 million for an existing local marketing agreement between the seller and Grupo Radio Centro.

With the value of likely the largest deal of the quarter — the Apollo Global Management/Cox Media Group transaction — still an estimate, the total values for the quarter remain subject to change and will be adjusted accordingly as soon as that transaction is filed with the FCC.