Year-over-year deal value across P&C and life insurance expected to more than double in 2018, marking the second-busiest year since 2005

New York, NY, Oct. 09 2018 — After one of the most active years for property and casualty (P&C) and life insurance M&A, market conditions point to a continued push for deals, according to analysis by S&P Global Market Intelligence.

Through the first nine months of 2018, the $39.1 billion in aggregate transaction value ranks as the most active year for insurance M&A since 2015. It is already the second most-active full calendar year after adjusting for inflation since 2005, and the second-busiest year in terms of unadjusted aggregate deal value since 19981. S&P Global Market Intelligence estimates deal value full-year 2018 will increase by approximately 150% from 2017 to more than $44 billion.

Tim Zawacki, Senior Insurance Analyst at S&P Global Market Intelligence said, “We are in a period where insurance carriers are reevaluating what is core to their franchise and pushing for greater efficiency in both expenses and capital utilization, which in turn is driving deal volume close to record highs. With a continued push for consolidation even after one of the most active years for P&C and life insurance M&A, a variety of factors will continue to drive transaction deal value beyond 2018.” 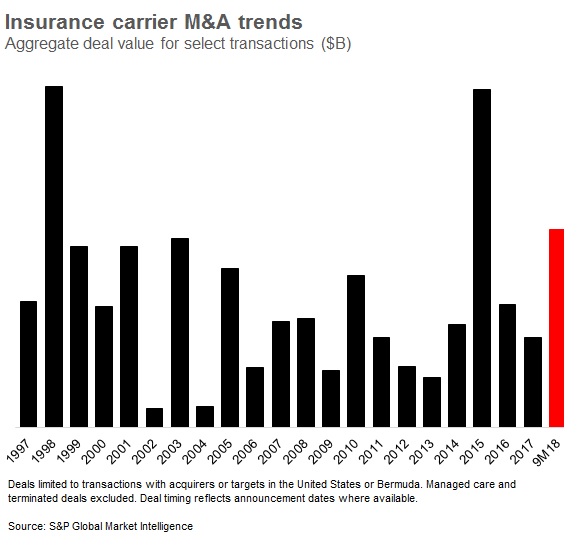 Federal tax reform and continued inbound interest from international acquirers were key drivers of in growth for M&A appetite, despite protectionist political rhetoric, excess capitalization, and strong interest by private equity-backed buyers. The re-emergence of AIG as a consolidator coupled with increased strategic investment in insurtech startups by established carriers rounded out the primary factors that fueled M&A growth.

Mr. Zawacki added, “Uncertainty about the future of the auto insurance business may be a driver of consolidation in the near term. We project that the private and commercial auto business will account for 43.3% of the US P&C industry’s total premium writings in 2018.”

From a longer-term perspective, factors such as the rise of the sharing economy, the development of fully autonomous vehicles and the broader adoption of advanced vehicle safety technology create questions about the sustainability of this critical component of the P&C industry’s income.

Carriers have already begun to respond to disruption by using M&A to broaden the scope of the products they offer and to enhance their level of specialization within certain niches.

Additional findings from S&P Global Market Intelligence’s insurance M&A analysis will also be presented by Mr. Zawacki at the S&P Global Market Intelligence for the 9th Annual Insurance M&A Symposium, which will feature a fireside chat with the CEO of Kemper Corporation, Joseph Lacher, to discuss his philosophy on M&A and how his company is using a recent deal to accelerate its transition into growth mode.

The symposium will take place at Carnegie Hall in New York on October 17-18, and will include industry speakers from S&P Global, Citigroup, Tokio Marine Holdings and more. A limited number of complimentary press passes are available. Please contact Elizabeth Loftus at elizabeth.loftus@spglobal.com for more information.

About S&P Global Market Intelligence
At S&P Global Market Intelligence, we know that not all information is important—some of it is vital. Accurate, deep and insightful. We integrate financial and industry data, research and news into tools that help track performance, generate alpha, identify investment ideas, understand competitive and industry dynamics, perform valuations and assess credit risk. Investment professionals, government agencies, corporations and universities globally can gain the intelligence essential to making business and financial decisions with conviction.

1 Limited to insurance underwriter transactions where the buyer and/or the target is based in the U.S. and Bermuda, excluding managed care targets and terminated deals.