Monterey, Calif., Jan. 03 2020 — U.S. broadcast station mergers and acquisitions (M&A) volume reached a total of $900.0 million in the fourth quarter of 2019 as tracked by Kagan, a media research group within S&P Global Market Intelligence. The TV market registered two transactions above the $100 million mark and a number of mid-sized deals. The radio market delivered its lowest quarterly deal volume since the second quarter of 2016.

The largest TV deal of the quarter was announced in November. Fox Corp. agreed to pay $352 million to Nexstar Media Group Inc. for three stations in in Seattle and Milwaukee. Nexstar acquired the stations as part of its Tribune Media deal, which closed in September. In return, Nexstar will receive two Fox-owned stations in the Charlotte, N.C., market for $45 million. 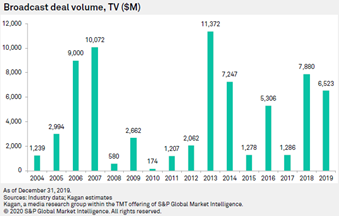 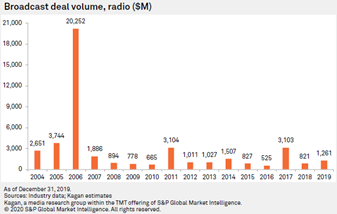 In the fourth quarter's third-largest deal, in December, NRJ Holdings LLC announced the sale of seven DTV stations and one Class-A station to RNN National LLC for $81.2 million.