Australia's Metallurgical Coal Production On The Rise Through 2022

Brisbane, Australia, Oct. 18 2018 — Robust steel demand from China, India and Japan, which accounted for 70% of Australia’s metallurgical coal demand in 2017, will contribute some stability to seaborne prices, according to the latest S&P Global Market Intelligence analysis presented at the Brisbane Resources Round-up 2018 conference.

Richard Foy, Senior Research Analyst at S&P Global Market Intelligence said, “We expect to see Australia’s metallurgical coal production to increase from 182Mtpa in 2018 to 195Mtpa by 2022, due primarily to the ongoing price recovery encouraging both greenfield and brownfield developments. A potential risk to supply comes from the increase of thermal coal prices incentivizing producers to switch metallurgical coal products to a premium thermal product.”

Key conclusions from the analysis include the following: 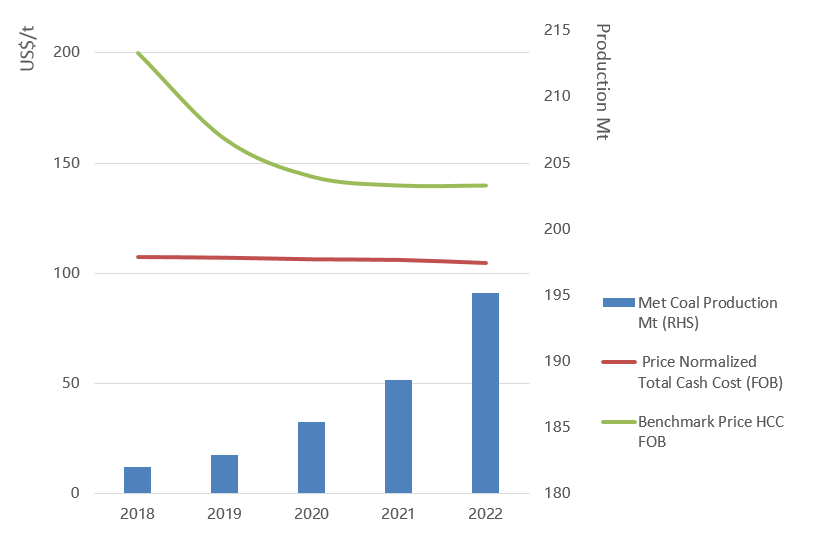 Mr. Foy added, "The decline in prices since 2011 forced Australia’s coal miners to make significant cost savings to preserve margins, the recovery in prices since 2015 also saw a concurrent increase in costs largely from rising oil prices and appreciation in the Australian dollar. Looking forward, we expect costs to stabilize. If the prices follow the consensus forecasts for coking coal, high cost Australian operations could come under pressure to exit the market due to negative margins in 2020.”

At S&P Global Market Intelligence, we know that not all information is important—some of it is vital. We integrate financial and industry data, research and news into tools that help track performance, generate alpha, identify investment ideas, understand competitive and industry dynamics, perform valuations and assess credit risk. Investment professionals, government agencies, corporations and universities globally can gain the intelligence essential to making business and financial decisions with conviction.
S&P Global Market Intelligence is a division of S&P Global (NYSE: SPGI). For more information, visit www.spglobal.com.