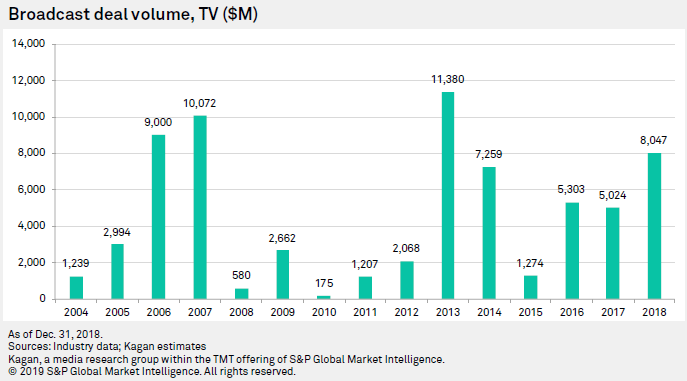 In the largest deal of the quarter and year, Nexstar Media Group announced on Dec. 3 that it would acquire all of Tribune Media’s assets for $46.50 per share. Kagan estimates the broadcast assets to be worth $3.51 billion.

Ranking second in deal value for the year was the $3.44 billion merger of Gray Television Inc. and Raycom Media Inc. from the second quarter. The top radio deal of the fourth quarter was the Hubbard Radio LLC’s $88.0 million purchase of Alpha Media LLC. It also ranked as the second-largest radio deal of 2018, topped only by Bonneville International Corp.’s $141.0 million purchase of eight radio stations from Entercom Communications Corp. in August. 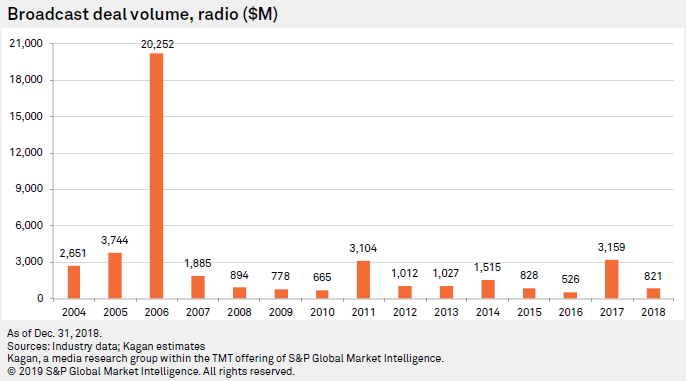 Other leading TV station M&A in the fourth quarter:

The only significant radio deal in the fourth quarter was Hubbard Radio’s $88.0 million purchase of Alpha Media’s largest cluster by revenue, comprising six stations in the West Palm Beach-Boca Raton, Fla. market. The quarter featured eight other radio deals worth over one million dollars each, the largest being Saga Communications Inc.’s purchase of four FM stations in the Gainesville-Ocala, Fla., market from Ocala Broadcasting Corporation LLC for $9.3 million.

At S&P Global Market Intelligence, we know that not all information is important—some of it is vital. Accurate, deep and insightful. We integrate financial and industry data, research and news into tools that help track performance, generate alpha, identify investment ideas, understand competitive and industry dynamics, perform valuations and assess credit risk. Investment profes-sionals, government agencies, corporations and universities globally can gain the intelligence es-sential to making business and financial decisions with conviction.