Minus Nine Now: The Scars and the Way to Heal

De-globalisation, which started with the global financial crisis of 2008, and further fed by the US-China trade wars, is all set to accelerate with the pandemic.

To balance the near and medium term growth concerns, the government needs to take more steps to address the current pain in the economy.

The Scars and the Way to Heal

S&P Global foresees, on average, a 3% permanent hit to GDP in Asia-Pacific economies (ex-China and India) over the medium run. For India, however, we estimate the permanent loss at 13% of real GDP.

To catch up, India would require average real GDP growth to surge to 13% annually over the next three fiscals, a feat that has never been achieved. In the base case, a deep hit from the pandemic, pre-existing weakness in the economy and limited fiscal policy push to growth is likely to impair India’s ability to haul itself over to the pre-pandemic trend of real GDP in the coming years. The medium term growth path for India is likely to trend down in the business-as-usual scenario. In the base case, we see growth shooting to 10% in fiscal 2022, on the back of a very weak base and some benefit from the rising-global-tide-lifting-all- boats effect. Even with that, real GDP will only merely catch up to fiscal 2020 level by fiscal 2022. Beyond that, we see growth averaging ~6.2% annually over the next three years (that is, between fiscals 2023 and 2025). 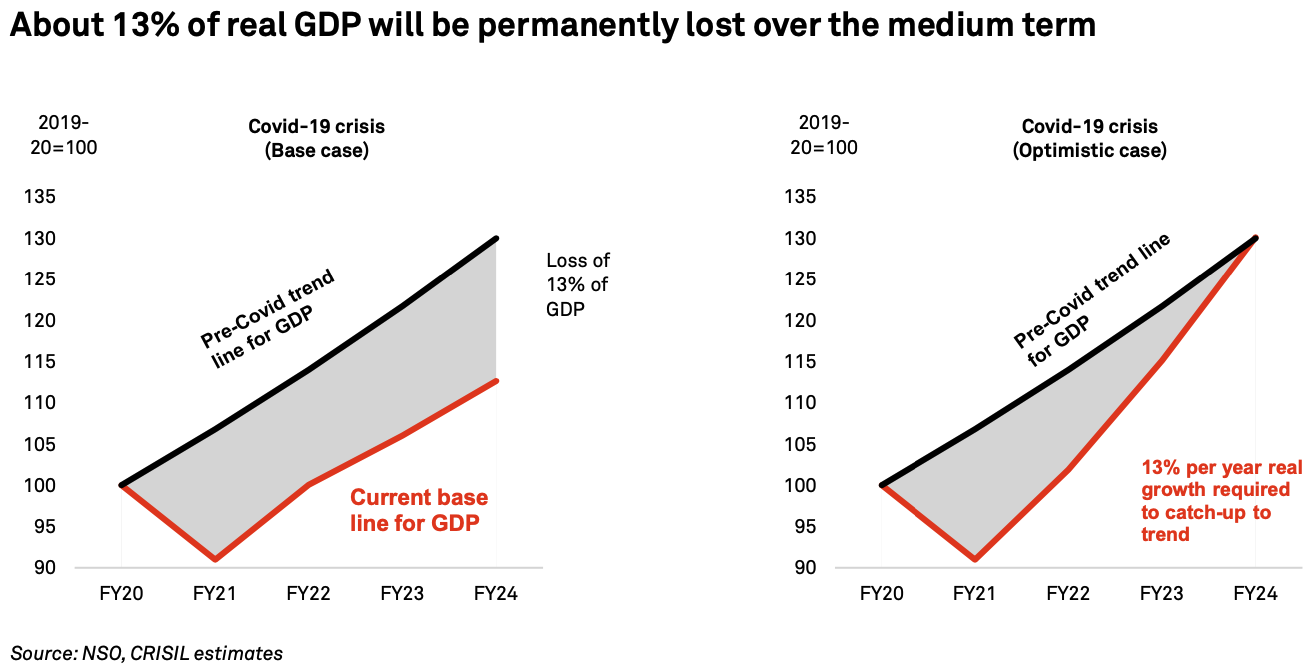 Over the medium term, growth may have to lean more on technology and efficiency improvements. In this, reforms undertaken over the past few years, such as digitalisation, push to financial penetration and connectivity, and GST could yield gains.

What can check the erosion of medium run term growth potential?

De-globalisation, which started with the global financial crisis of 2008, and further fed by the US-China trade wars, is all set to accelerate with the pandemic. The received wisdom is that in the post pandemic order, the relentless pursuit of efficiency could take a back seat as other considerations such as resilience and reliability take precedence. And this could reduce reliance on supply chains in the current form. For developing countries like India, the hit to global supply chains may limit chances of industrialising through this route as happened with China and many other East Asian nations. India will have to swim against the tide to capture the falling share of trade in global GDP. This requires fast-tracking of reforms to attract investments relocating away from China.

Looks like India’s growth trajectory will be largely influenced by domestic factors as the global environment will be less favourable. So in the time to come, India must:

− Attracting investments in manufacturing could be one of the pillars on which India’s recovery from fiscal 2022 onward could be scripted. But this is not an opportunity without competition from other Asian economies. Manufacturing sector has been in recession even before the pandemic struck since second quarter of fiscal 2020. Consequently share of manufacturing in GVA fell from 18.1% in fiscal 2019 to 17.4% in fiscal 2020. Land and labour markets, availability of physical infrastructure (power, water, roads, logistics and transport), and ease of doing business, in particular, policy certainty on regulation, taxation, licence acquisition and clearances, need a big jolt and sustained implementation.

that benefits accrue over the next few years. GST was introduced in 2017 and is still getting streamlined. The tax is helping create a common national market, and improving logistics efficiencies and formalisation of the economy. The IBC is helping in resolution of bad loans, and should improve the corporate credit culture in the medium run.

− The next five years will see about 30 million young Indians enter the workforce seeking employment. Labour absorption we understand, could be a challenge. However, if sectors with higher labour absorptive capacity are given a bigger policy push, these could expand and create jobs. For instance focus on education and healthcare, where India lacks adequate spread and supply of quality educational institutions and healthcare facilities, could be labour absorptive as well. Similarly, sectors such as trade, hotels and restaurants, community services, and some sub-sectors in manufacturing could potentially create employment if given the right policy support to grow.

− Reforms such as amending existing laws to provide greater flexibility in hiring of workers to enable large-scale production bases, is a prerequisite. Investing in human capital and strengthening social security for workers is another crucial area for making labour reforms more palatable. And these can also help set off a desirable cycle of higher domestic and foreign investments, and employment generation over time.

Recent reforms announced – liberalising farm trade, removing stocking limits under Essential Commodities Act, enabling better price discovery for farmers, and strengthening allied activities - augur well for the sector. These could lead to the much-needed improvement in productivity of this sector and farm incomes. There is more ground to cover on agriculture reforms, one of which is ensuring a reliable and indicative price signalling system for farmers to rely on at the time of sowing. For instance, a study by Raghunathan and Gulati suggests linking farmers to futures markets could be one way to ensure better price discovery and hedge the price risk as farmers base their decisions on future prices rather than the previous season’s prices.

The truth with reforms is that you bite the bullet first and reap the benefits later. To balance the near and medium term growth concerns, the government needs to take more steps to address the current pain in the economy. It should take stretch itself fiscally to support vulnerable households and small business which have been hit hard by pandemic. This will also help preserve productive capacity in the economy and together with reforms, can create a medium term upside to growth.