Healthy contribution from agriculture backed by good rains has been the only propitious factor in pandemic- hit India this calendar year.

Agriculture was the only major sector that registered positive growth in the first quarter of fiscal 2021 – a sole bright spot. But that is only part of the rural story, as non- farm activities contribute a much larger chunk. As per NITI Aayog, agriculture’s share in the rural economy was only 39.2%. Hence, what happens to the non-farm sector is equally or more important.

Agriculture punches above its weight

Healthy contribution from agriculture backed by good rains has been the only propitious factor in pandemic- hit India this calendar year. Rainfall has been abundant in July and August, critical months for the kharif crop. They have also been well-spread, hastening sowing. Agriculture was also the only sector that grew – as much as 3.4% -- in the first quarter, reflecting a healthy rabi crop and rapid progress in kharif sowing. Government data shows that as on August 28, 100% of the normal kharif area had been sown and sowing was ~7.2% higher on-year. CRISIL Research projects kharif season output to be 5-6% higher on year.

Though agriculture’s share in overall GVA is only 14- 15%, its share in employment remains a high 44%. It is also a critical supplier of much-needed nutrition during the pandemic. Plus, reverse migration trends this year suggest a much larger population would be dependent on farm sector jobs. Good agricultural production this year could especially help cushion the impact in those states/regions with high Covid-19 caseload, forced lockdowns and restrictions. Agriculture was/is a permitted activity during lockdowns and its unhindered performance is a ray of hope for these states. 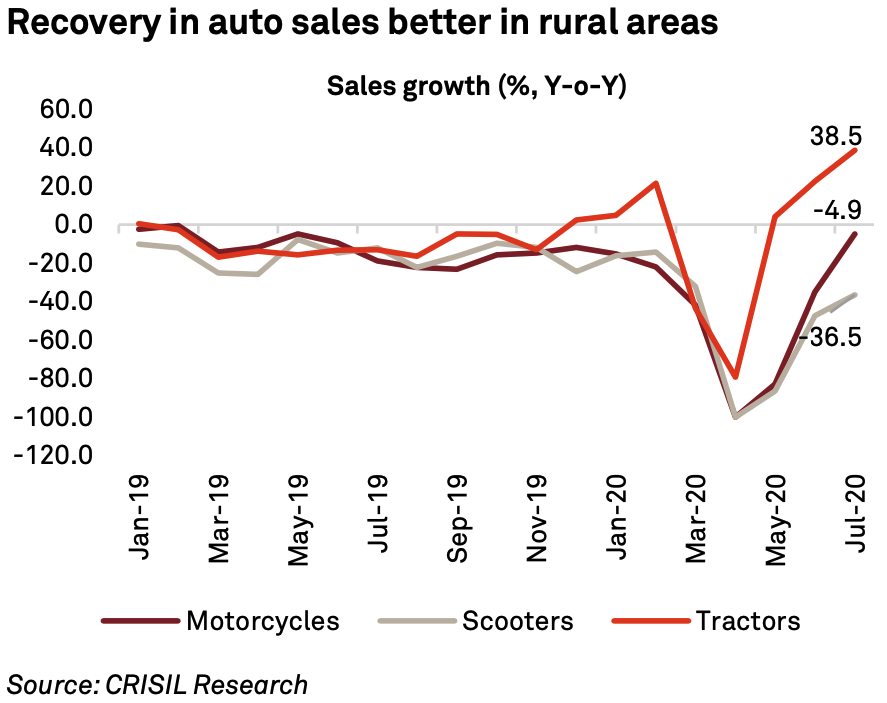 The chart above shows annual tractor (mostly rural centric) sales growth turned positive in May, even as the nationwide lockdown was underway, and has since gone up. Decline in motorcycle sales (~60% rural share) too has slowed, from -83.0% in May to -4.9% in July. On the other hand, scooter sales (~30-35% rural share), which is more urban centric, remains weak. Fast moving consumer goods sales too saw a bigger contribution from rural areas, which in part, was on account of less stringent lockdowns there compared with urban pockets.

But there are factors that can spoil the rural demand story

The pandemic is spreading in rural India

The contribution of rural areas to the pandemic tally has been rising as the virus spreads from tier-1 (metropolitan) cities to small towns and rural areas which have a much weaker health infrastructure. (refer to the Covid section on Page11). This could necessitate stricter lockdowns going ahead, affecting rural growth.

Agricultural output growth is expected to be healthy this year. But while retail food inflation is rising, the farmer is not benefitting proportionately as wholesale inflation – a better indicator of what farmers’ incomes would be - remains soft. CPI-food and WPI-food inflation averaged 9.8% and 2.9% during April-July 2020. Simply put, terms of trade needs to improve at a faster pace for farm incomes to move up notably.

Moreover, if the pandemic’s spread to rural areas is not contained, any disruption during the harvesting and marketing period could take away some gains.

Given non-farm is a bigger contributor than the farm sector to the rural economy, we assess how the former is performing to predict rural demand. And here’s where the good news seems to end. 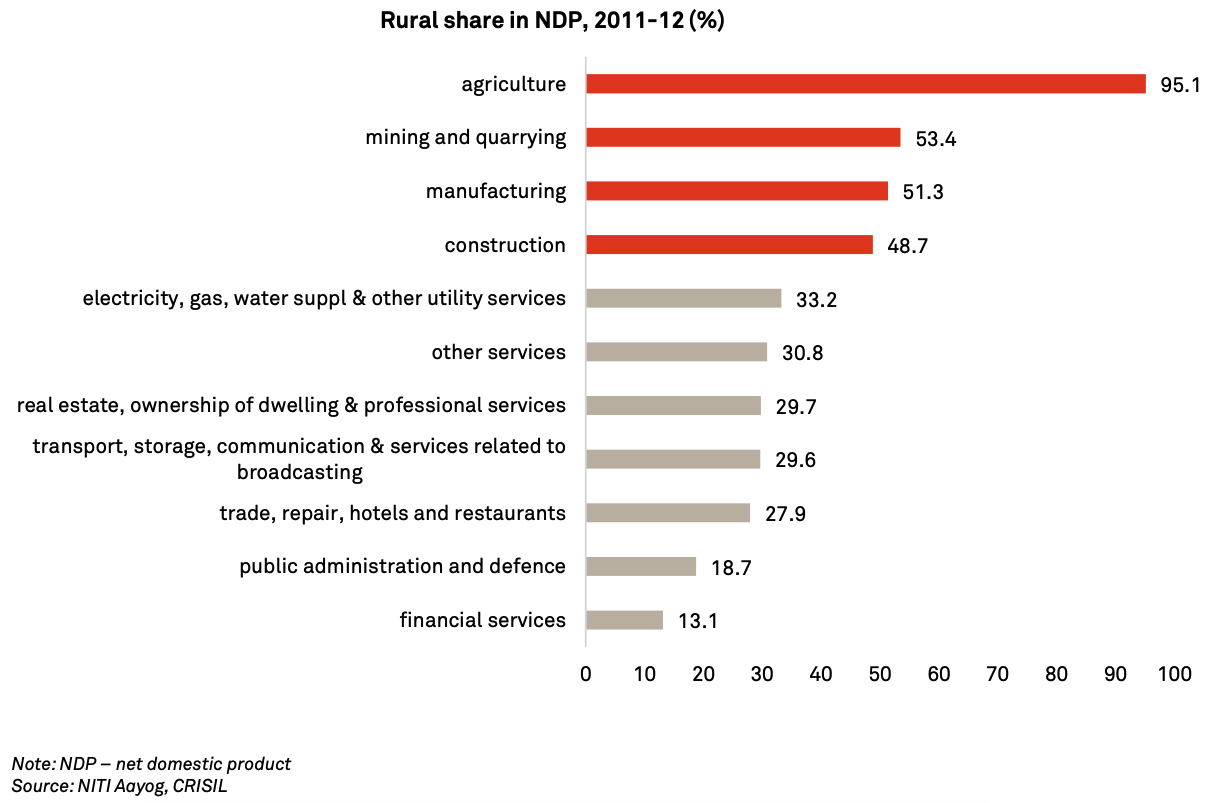 The chart above shows, besides agriculture, other key sectors of the economy too have a large rural focus. Share of rural areas in mining and quarrying, manufacturing and construction is predominant. These sectors declined 23.3%, 39.3% and 50.3%, respectively (on-year), in the first quarter of fiscal 2021. This is worrisome, as manufacturing and construction are not only the second- and third-highest employment generating sectors at the national level after agriculture, but also have large rural employment shares at 47.4% and 74.6%, respectively. Poor performance of these sectors, therefore, means a drag on rural employment, and therefore, rural demand.

Given that construction has a large rural employment share of 74.6%, its performance remains a critical factor for rural demand prospects. Here, too, signs are not encouraging. Although government’s fiscal stimulus remains rural focussed, it may need further support. For instance, under the Pradhan Mantri Gram Sadak Yojana, or PMGSY (a good proxy for rural construction activity), only 2,198 km of road was constructed till June this fiscal, down a massive 40% on-year (national highway construction, in comparison, was down only 13% on-year during April-July 2020). Rural road spends have been on a declining trend since last fiscal due to lower construction targets. CRISIL expects a further ~9% decline this fiscal as funds may be diverted away from the PMGSY scheme.