Minus Nine Now: The Slack in Consumption and Investments

While GFCF was falling even before the pandemic, PFCE growth turned negative for the first time, in the new (2011-12) GDP series. The fall in GFCF has been much steeper than that in PFCE.

All this suggests private consumption is expected to remain weak for longer. With job losses and income uncertainty, people will tend to reduce discretionary spending and increased focus towards saving.

The Slack in Consumption and Investments

Private final consumption expenditure (PFCE), or consumption expenditure of households, and gross fixed capital formation (GFCF), or investments, are the largest and second largest demand side components of the Indian economy, respectively. Their shares in GDP in fiscal 2020 were 57.2% and 29.8%. The pandemic only magnified the pre-existing weakness in private consumption and investments. While GFCF was falling even before the pandemic, PFCE growth turned negative for the first time, in the new (2011-12) GDP series. The fall in GFCF has been much steeper than that in PFCE (see chart below). 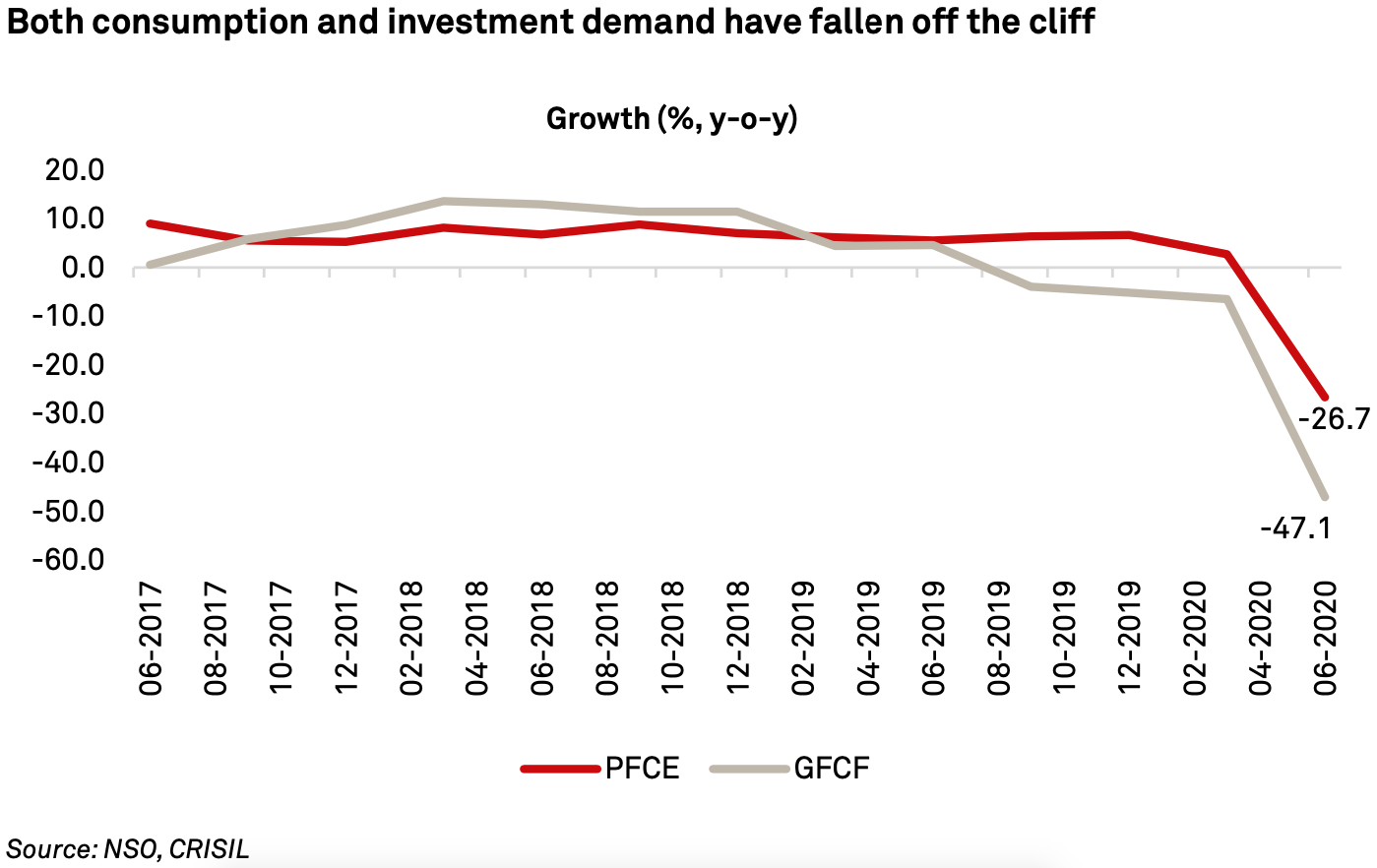 Consumption may be slow to revive

Despite some support from the rural economy (refer to the ‘rural demand’ section), private consumption is expected to sink this fiscal. A rising number of cases in rural areas could complicate and delay return to normalcy. This means continued uncertainty about employment prospects and incomes.

Consumption of some services, especially contact- based such as travel, sports and entertainment will also remain muted till such time a Covid-19 vaccine is mass produced. High retail inflation at a time when incomes are falling, is a double whammy to disposable incomes. 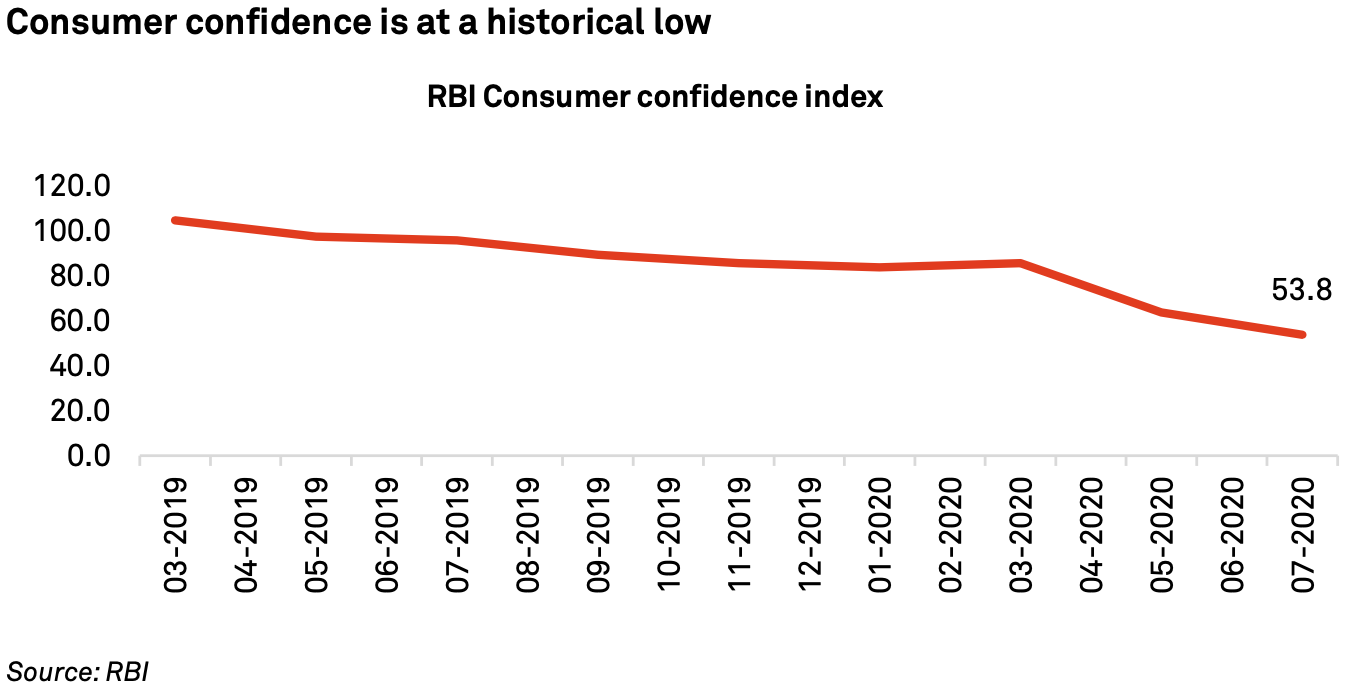 All this suggests private consumption is expected to remain weak for longer. With job losses and income uncertainty, people will tend to reduce discretionary spending and increased focus towards saving. This is partly getting reflected in the rise in bank deposits despite the reduction in deposit rates. From 6.1% in March this year, the average deposit rate of 10 key scheduled commercial banks for 1-2 year tenure was down to 5.1% in August. Yet, deposit growth rose from 7.9% on-year as on March 20 to 11.0% as on August 14.

This is also mirrored in a decline in consumer confidence even after the nationwide lockdown was lifted: RBI consumer confidence index fell to its lowest level of 53.8 in July, down from 63.7 in May. Consumer’s future expectation index rose a few points from 97.9 in May to 105.4 in July, but still remains much below fiscal 2020’s average of 120. Given that the past fiscal had recorded the lowest economic growth in a decade, the latest future consumer confidence index suggests just how muted sentiments are.

The funk in investments

Investments in the economy were falling since fiscal 2020 and the pandemic shock has further weakened prospects of revival. While the private corporate sector – an important investment player in the economy – was already in deleveraging mode which will continue this fiscal, the hit to revenue due to lockdown and an uncertain / weak growth environment means they will continue focussing on utilising existing capacity rather than indulge in fresh investments. The sharp fall in business confidence attests to this (see charts below). 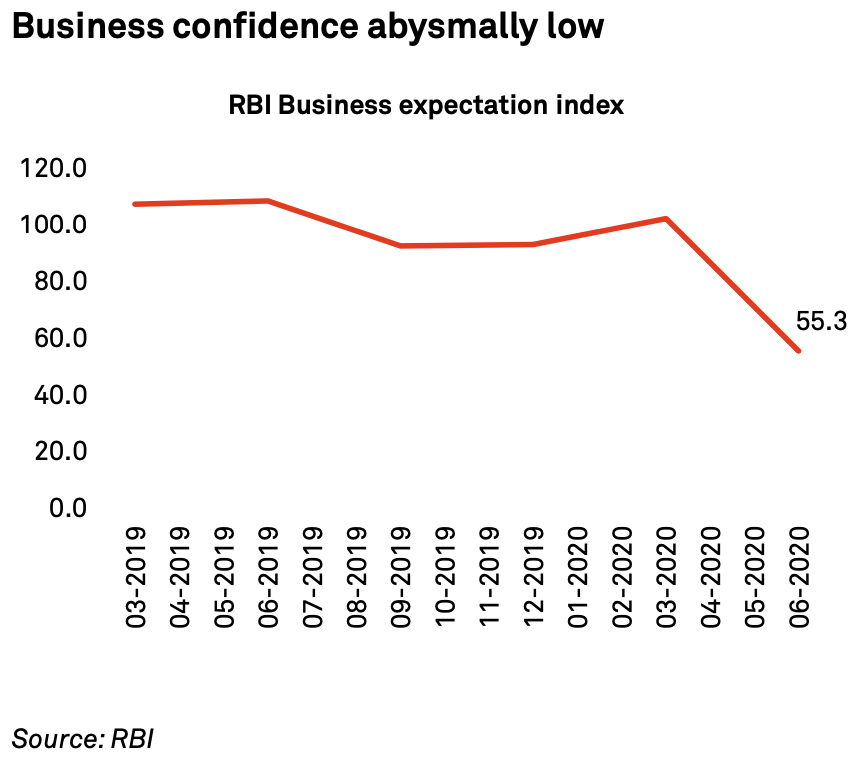 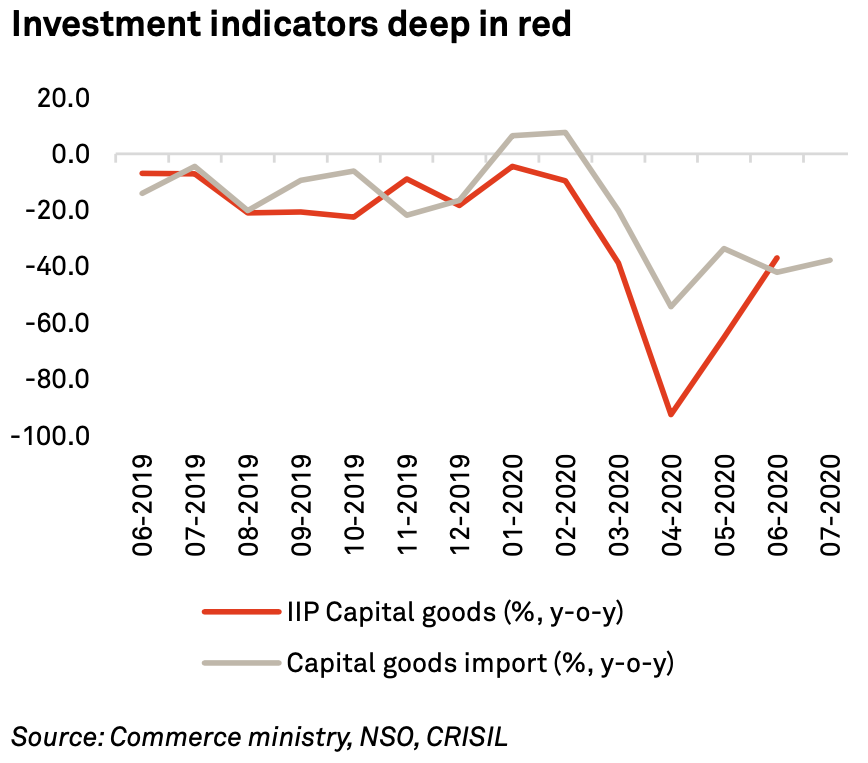 Capacity utilisation has been below 70% since the September 2019 quarter (the latest print was 69.9% for March 2020). This has likely fallen further, given the large-scale demand destruction in the economy. It is clear that private sector investment will remain inert for some time to come.

The other channel of government investments too remains constrained by fiscal stress. While the central government has maintained a low positive capex growth so far this fiscal, state governments – which play a much bigger role, with about two-thirds share in total government capex – have seen decline in their capex. Nine states for which monthly data is available corroborate this (see chart below). 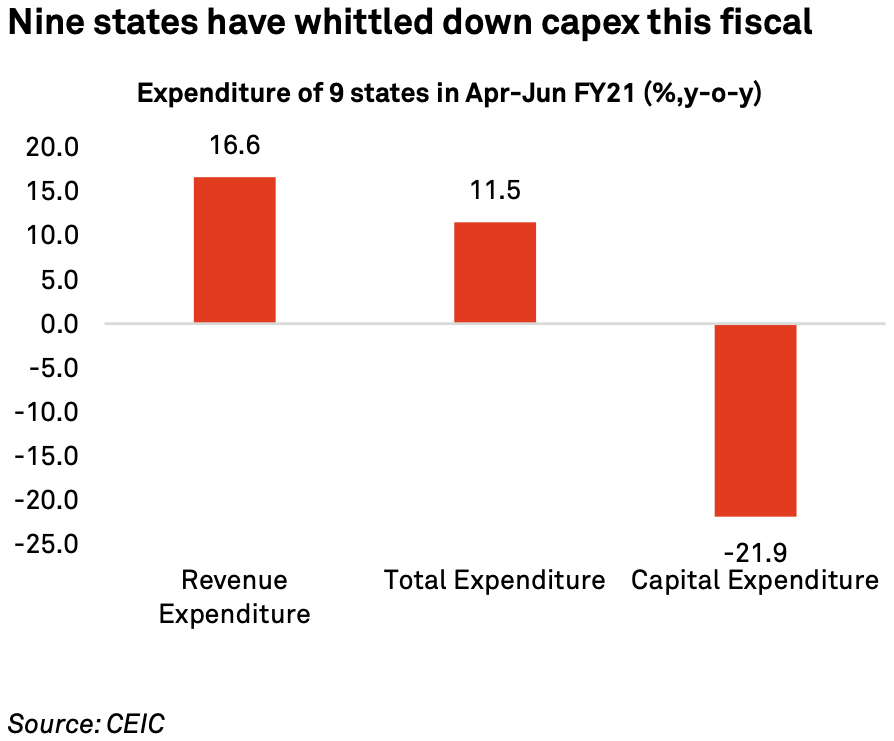 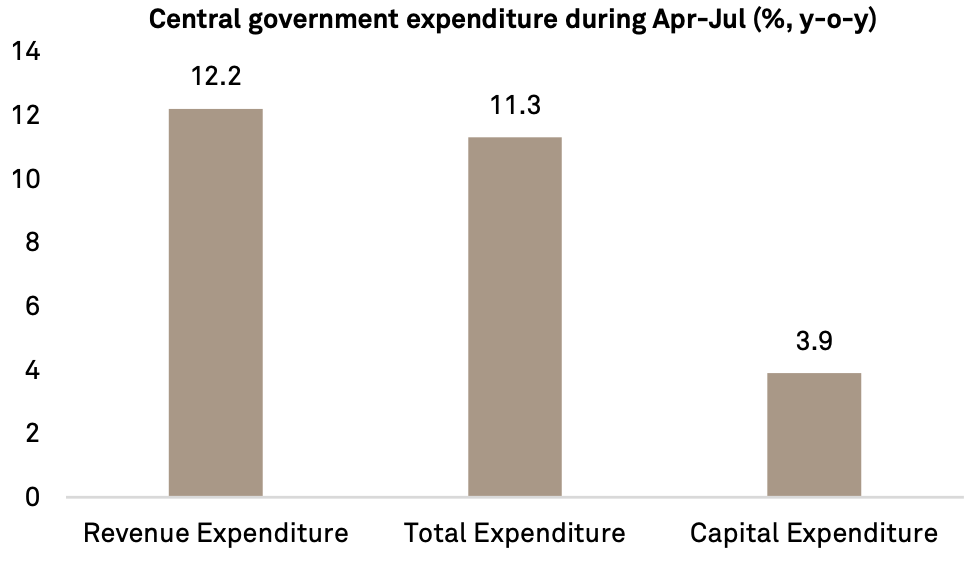