2020 Review: Pandemic, Discipline and Failing to Fail – What We Got Wrong this Year

This report is reprinted from Panjiva, part of S&P Global Market Intelligence. Download this report here.

Panjiva’s 2020 year-ahead Outlook series provided views on the outlook for over 30 topics across a wide range of global trade, logistics and industrial supply chain subjects. This report flags issues we missed or got wrong, why and what may happen next.

What we missed: The big one, which caught most supply chain operatives unawares. While the COVID-19 pandemic is the result of a virus that first appeared in 2019, it only became relevant for global supply chains in February. In the end we published over 250 reports on the topic.

What happened: Widespread manufacturing disruptions started in China and rapidly spread across Asia during Q1. That was followed by a wave of demand destruction as the global economy was beset by industrial and commercial lockdowns. The third stage of development is still underway with the uneven reopening of supply chains during which firms with resilient sourcing have done better than those without.

Where next: China has led the economic recovery, with other countries and regions experiencing a faltering recovery. In October the nascent recovery in global trade activity took a step backwards with exports from 37 countries plus the EU tracked by Panjiva declining by 1.5% year over year after a 1.2% improvement in September. A stabilization of growth in Asia, led by China, was offset by a continued decline in the Americas and a reversal to an 8.4% drop in Europe as a result of renewed lockdowns across the continent.

The fourth stage, marking recovery and preparation for long-term resilience is only just getting underway and could be easily undermined by a resurgence in the pandemic which is occurring despite the availability of vaccines. 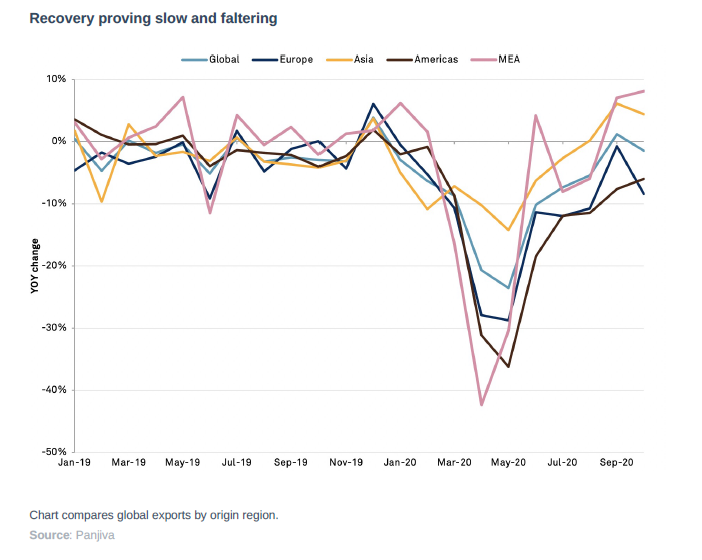 What we missed: The phase 1 trade deal signed by the U.S. and China in January included significant commitments from China in regards to purchases of U.S. goods and services alongside promises to reform a wide range of ownership and intellectual property regulations. We repeatedly flagged the risk that the targets looked overly ambitious, wouldn’t be achieved and the trade deal would fail.

What happened: We were correct that the deal’s terms would not be broadly delivered upon. As of the end of October, the latest available data, U.S. exports of the 548 products covered by the deal reached $67.7 billion versus the $119 billion required under the terms of the deal for the first 10 months of the year. In the month of October alone sales came close at $11.2 billion versus $11.9 billion required, though that was largely down to agricultural shipments, in particular including soybeans and meat. Yet, we were wrong in assuming the deal would be declared out of compliance, indeed a declaration was made that the deal was on track purely in terms of the agricultural component.

Where next: With two months of data left in the year it is of course possible that the target is approached. There is also the potential for large aerospace sales and declaration of force majeure under the “market conditions” clause to prevent the deal falling apart. Yet, it appears that the Trump administration has moved onto other measures, including sanctions against military-linked firms, rather than pursuing the details of the phase 1 trade deal. That will fall under the purview of the Biden administration, and specifically the U.S. Trade Representative appointee Katherine Tai. 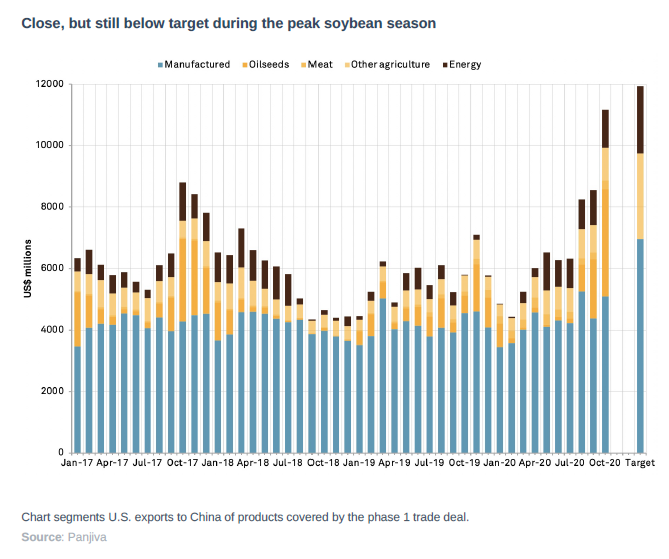 What we missed: Unresolved tensions over steel, autos, digital taxes and aerospace coupled with President Trump’s repeated comments that the EU “treats us worse than China” and the need to find a new populist trade target led us to conclude there was the risk of a wider trade war between the EU and U.S.

What happened: In the end the pandemic provided a distraction for both sides. That’s not to say that there haven’t been heightened trade tensions, in particular with the bilateral application of aerospace related, WTO-ratified retaliatory tariffs and the advent of digital services tax related tariffs to be applied by the U.S. from January 1.

Where next: A resolution to the aerospace and digital service tax related tariffs could be an early move by the incoming Biden administration as part of a clearly stated aim to rebuild alliances and reduce trade-related frictions. The EU has already proposed a multi-point plan of development. The removal of duties could be a boon for the EU luxury goods industry, including imports to the U.S. by Diageo, LVMH and L’Oreal among others, which has been hard hit by the tariffs as well as reduced demand linked to pandemic-related travel cuts. Panjiva’s data shows that U.S. imports of wine and spirits from the EU and U.K. fell by 14.9% and 22.0% respectively while shipments of cosmetics declined by 9.2% despite a surge in soap shipments linked to the pandemic. 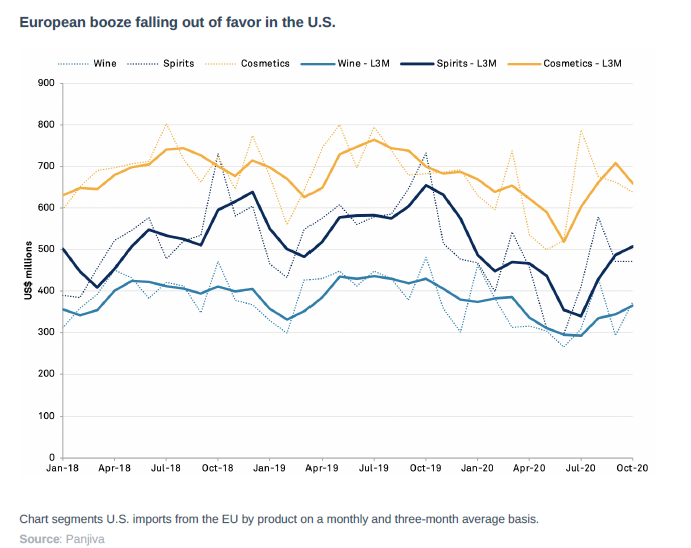 What we missed: The year started with bunker-adjusted container shipping profitability and freight forward margins at reduced levels versus the prior year, while increased costs from desulfurization and competition from new entrant competitors loomed. Our prescription was a wave of cost cutting as well as efficiency-enhancing mergers and acquisitions.

What happened: Container rates rose by enough at the start of the year to ensure that the costs of desulfurization were passed through while a collapse in oil prices meant that bunker fuel costs remained low. The slump in global shipping demand was met with unusual capacity discipline by the container lines while larger freight forwarders were able to leverage their flexibility to provide superior service without having to buy smaller operators. The more recent boom in shipping demand has led to a surge in profitability. S&P Global Platts‘ measure of bunker adjusted container rates on North Asia to U.S. West Coast routes averaged $3,564 per FEU in Q4’20 through Nov. 30 compared to $984 per FEU in Q4’19.

Where next: Regulatory threats loom with governments across the U.S., China, India and others reviewing the way in which shipping prices are set. New entrants are also not going away, requiring increased investments by the incumbents in new technologies. 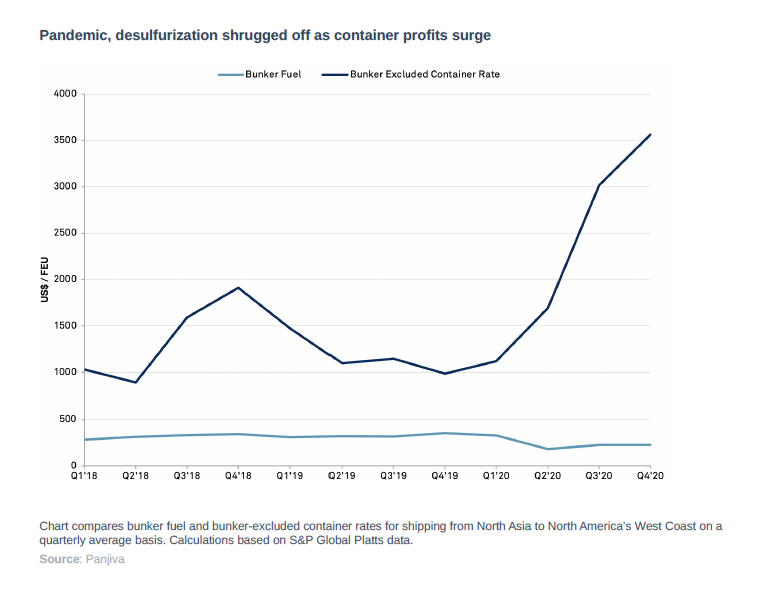 Our annual review of black swan risks missed the big one (see above) while two of our low-probability, high-impact concerns didn’t turn out as predicted.

We flagged concerns that a close and contested election result could precipitate an extended period of trade policy uncertainty. In the end the contestation was one-sided and has not had a material impact. The Trump administration has continued to apply previously established trade policies and if anything may leave problems for the Biden administration in the form of increased tariffs on Vietnamese imports and worsened relations with China.

On that topic we’d noted that China’s crackdown with regards to Hong Kong could result in a widening of the trade war. The application of new national security laws did lead the Trump administration to declare that Hong Kong’s independence had been lost but did not apply section 301 duties to imports from Hong Kong.

Imports from Hong Kong have underperformed those from mainland China somewhat. U.S. seaborne imports from businesses located in Hong Kong climbed by 18.9% year over year in the three months to Nov. 30 while those in mainland China experienced shipments which jumped 28.4% higher. It remains to be seen whether Biden administration policy will choke off the surging imports. 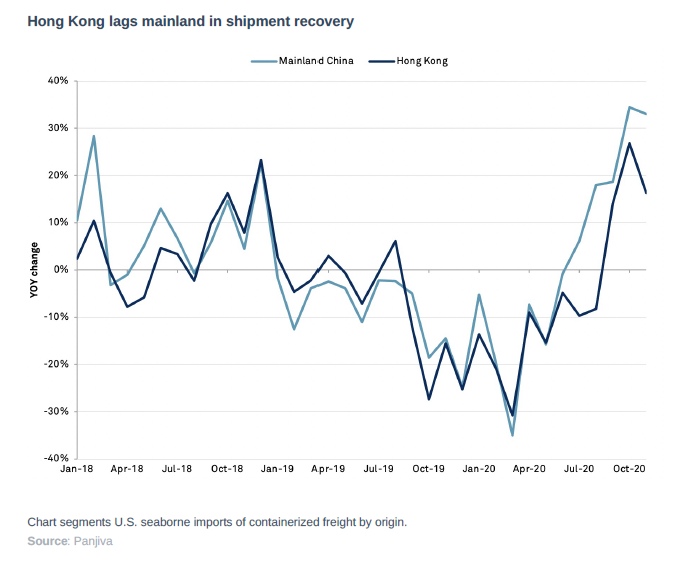