Venezuela, Rosneft and US sanctions complications: Fuel for Thought

A Reversal, or Two


Venezuela, Rosneft and US sanctions complications: Fuel for Thought

US efforts to starve Venezuela’s Maduro regime of oil revenues have substantially increased the role of Russian energy in the US Gulf Coast, an outcome the Trump administration likely never anticipated when it put sanctions in place over a year ago.

The situation has created a significant shift in product flows into Gulf Coast refineries and appears to have complicated the Trump administration’s plans to increase pressure on Venezuela, including plans to sanction Russian state oil Rosneft, which have remained on hold for months.

The embargo on Venezuelan crude oil, ongoing OPEC production cuts and the impacts of the International Maritime Organization’s overhaul of marine fuel sulfur regulations have created an unexpected opportunity in Gulf Coast refineries for exporters of Russian petroleum. It also presents a challenge for the Trump administration, which continues to threaten Rosneft with sanctions for its continued trade with PDVSA, Venezuela’s state-run oil company.

US sanctions on Rosneft would likely have wide-ranging consequences for the global oil market, including immediate and potentially deep economic damage for US refiners who have spent the past year adjusting to the effects of accelerating US oil sanctions. 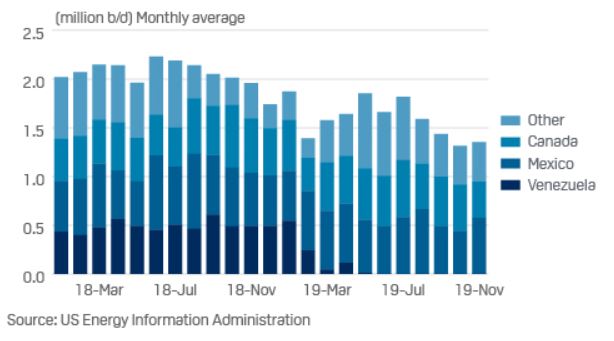 “There would be a near-term disruption for Gulf refiners,” said John Auers, executive vice president of Turner, Mason & Co. “There will likely be a change in flows, but probably not an overall change in supply in the longer term.”

Roughly since the US blocked imports of Venezuelan crude in January 2019, US refiners have ramped up imports of Russian residuum, US Energy Information Administration data shows. EIA defines residuum as a residue from crude oil after distilling off all but the heaviest components, with a boiling range greater than 1,000 degrees Fahrenheit.

The loss of Venezuelan supply has tightened the sour crude market for US coking refineries, according to S&P Global Platts Analytics.

As residuum imports by Gulf Coast refiners have increased, the amount of the crude residue sourced from Russia has increased, too.

US refiners also import a much smaller amount of unfinished oil from several other countries, including Belgium and Egypt. In November, more than 66% of US imports of unfinished oils came from Russia, according to EIA.

It remains unclear what impact sanctions on Rosneft would have on US residuum imports, and it is also possible the Trump administration could grant exemptions for those imports if such sanctions were imposed.

Such sanctions, analysts believe, could impact the profitability of US refiners with significant coking capacity, potentially impacting fuel prices during a perilous presidential election year.

Analysts stressed, however, residuum imports remain a relatively small portion of US energy imports and may raise no concerns within the administration.

In August, a senior Trump administration official told Platts the US was prepared to sanction Rosneft if it continued to trade in crude oil and fuel with PDVSA, but analysts have said such sanctions have been on hold due to the potential impact they could have.

In a note this week, analysts with ClearView Energy Partners wrote the administration may be hesitant to impose sanctions on another commercially significant entity, as it did with Rusal in April 2018 and Chinese shipping giant COSCO in September, due to how these actions roiled markets.