The amount of assets managed by digital advisers could grow over fourfold from the end of 2016 to the close of 2021, based on S&P Global Market Intelligence estimates, as large brokers and wealth managers continue to invest in the technology. We estimate that assets under management will grow from a base of roughly $100 billion in 2016 to $143.94 billion in 2017, a 46% jump. By 2021, we predict assets will breach the $450 billion mark.

Clash of the Titans

Some of the biggest U.S. asset managers have already hopped on the bandwagon, racking up huge amounts of assets under management in a short time. For instance, Vanguard Group Inc.'s Personal Advisor Services offering had its wide release in May 2015 and by the end of 2016 had over $51 billion in AUM. 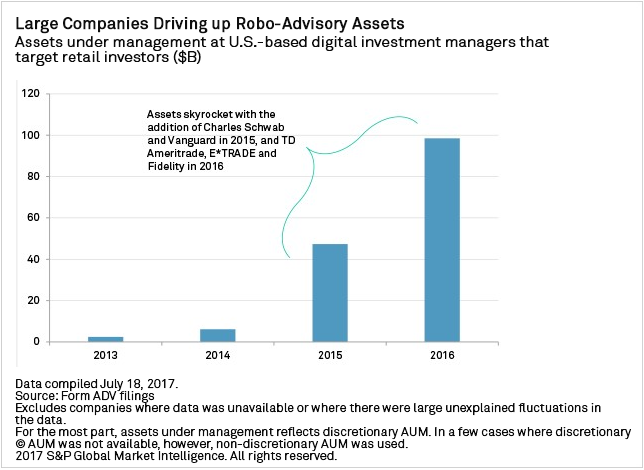 More are on the way. Wells Fargo & Co., Morgan Stanley and JPMorgan Chase & Co. are just a few of the names that have announced plans to create digital advisory platforms. We have incorporated these companies into our estimates, along with others that have announced such plans.

But our estimates could ultimately prove modest if more giants throw their hats in the ring. In addition to U.S.-based companies that might want to take part, some non-U.S. companies have begun to try out these models overseas. For instance, UBS Group AG, Nomura Holdings Inc. and Deutsche Bank AG have each developed platforms for non-U.S. markets and could conceivably look to export them.

We think this is a troubling sign for the independent companies that have sprung up in the past few years, since top-tier institutions have demonstrated they can quickly build their own platforms and win customers. While the pioneers have undoubtedly made an impact, forcing the industry giants to offer lower-cost products and adopt digital models, it seems unlikely that the Davids can take on the Goliaths in same way that, for instance, Amazon.com Inc. and Netflix Inc. did.

Despite the increased competition, independent digital advisers should benefit from a favorable operating environment. Over the past 25 years, the asset manager industry has witnessed positive trends, including asset appreciation, rising household wealth, an aging population and the evolution of employer-based retirement systems, as the Investment Company Institute, a trade organization, notes in its 2017 Fact Book. Startups can also benefit from the entrance of large industry players by licensing their technology to them. SigFig Wealth Management LLC, for example, has announced agreements with units of Wells Fargo and UBS, helping them create their own digital investment tools.

Digital investment startups have had a clear impact on the wealth management industry, forcing the established participants to take notice. But in so doing, these startups have awakened sleeping giants. Market leaders have introduced competing products and are rapidly accumulating assets, benefiting from their vast resources and established reputations. The well-funded startups with strong brand recognition — Betterment, Wealthfront and Personal Capital — will likely be able to hold their own, assuming they can continue to grow quickly, but the future seems less certain for their smaller brethren.