Battery storage deployment in the US is set for a rapid acceleration from 2020. That is one of the key takeaways from the latest S&P Global Platts Analytics’ US Power Storage Outlook, released to clients on December 18.

In addition, while megawatt deployments in 2019 were at 2018 levels, the storage duration of battery storage assets increased in the past years, pointing to new usages.

State policies and peaking capacity needs will remain the major drivers of near to medium-term battery deployments. Platts Analytics expects more than 13 GW of utility-scale battery storage to be commissioned by 2024 in the US. 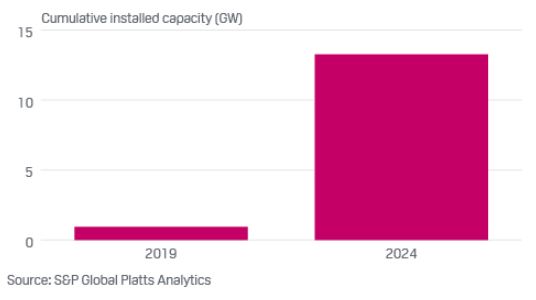 In response, developers flooded the New York Independent System Operator interconnection queue adding around 5 GW of battery capacity, with 70% of projects in downstate New York where pressure will increase to phase out old fossil fuel peaking power plants. In October 2019 the permit for a New York City project up to 316 MW/2,500 MWh or 8-hour of storage duration was approved, to replace sixteen existing fossil fuel-fired peaking units.

In 2019, the battery storage in interconnection queues maintained by wholesale power market operators (known as Regional Transmission Organizations, RTOs, and   Independent System Operators (ISOs) grew exponentially, with more than 70 GW of capacity, up from 25 GW at end-2018. However, some of the largest procurements announced were outside ISO regions (for instance in Nevada and Florida). Nevada has a long pipeline of projects, including a massive 690 MW solar PV/380 MW battery project by 2024. 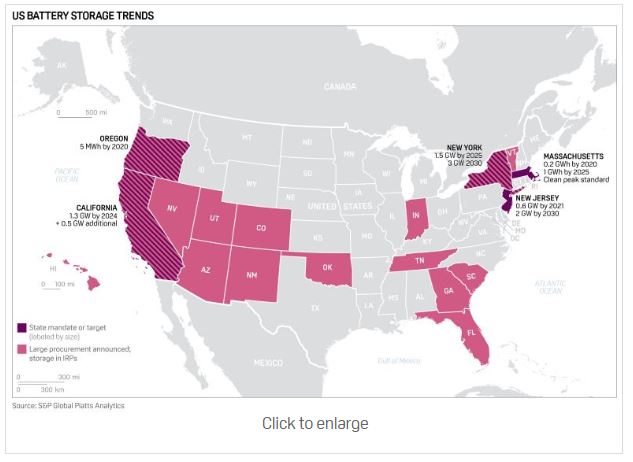 Battery storage projects are making their way into an increasing number of utility Integrated Resource Plans (IRPs), as battery costs come down, technology offering becomes more mature and the federal investment tax credit (ITC) for solar (and associated storage) remains in place. Grid operator PacifiCorp, which serves Oregon, Washington and California, had no battery storage in its 2017 IRP, but its 2019 IRP includes 600 MW of batteries paired with solar PV by 2023.

Increasing participation in wholesale markets will support deployments, facilitated by the implementation of Federal Energy Regulatory Commission (FERC) Order 841, which aims to level the playing field between storage and other energy resources. But further issues remain. FERC approved or partially approved a string of Order 841 compliance filings late last year. In the case of NYISO, for example, FERC approved in part and rejected in part the operator’s compliance filling, asking for further compliance filling by May 1, 2020.

In the case of PJM, the long-discussed 10-hour requirement for full capacity participation in the capacity market led FERC to open a paper hearing on the “unjust, unreasonable, unduly discriminatory or preferential as applied to Capacity Storage Resources”. With this requirement, battery storage owners have to de-rate their asset capacity: a four-hour duration battery will receive capacity revenues for 40% of its capacity. Beyond FERC Order 841, uncertainty remains around the interconnection and participation of hybrid generation, such as solar plus storage, in the wholesale markets.

Frequency regulation remains the primary use case, even in California where curtailment has been increasing. However, these markets are typically shallow and will saturate. New deployments will have to tap into new revenue streams (price arbitrage, operating reserve, capacity, transmission and distribution grids support), as we have seen happen in the UK and Germany, and will have a greater impact on wholesale markets. In ERCOT, the very low reserve margin is prompting several developers to look at merchant projects to provide reserve and energy. Sustained low reserve margins and renewable deployments will create multi-GW economic potential for battery storage in ERCOT, as identified by Platts Analytics’ modelling.

Alternative storage technologies have been in the news in the past months with Sofbank’s $110M investment in EnergyVault’s mechanical system, NEC and Ambri’s partnership to deploy liquid metal battery technology or the announcements around liquid air storage, or hydrogen storage in salt caverns in Utah.

However, we believe lithium-ion batteries will continue to dominate the market in this decade, as the electric vehicle market is helping to increase manufacturing capacity, in turn continuing to drive down prices. Alternative technologies may emerge from serving niche markets as longer-duration needs become more prevalent.