There are three major differences between SOFR and USD LIBOR.

Points 2 and 3 particularly make the transition from LIBOR to SOFR challenging.

One difficulty is that in the absence of SOFR-based term rates, SOFR compounded in arrears currently is the preferred replacement rate in many products. Calculated over the current interest period, it leaves little notice time before payment and poses significant operation disadvantages for some cash products (e.g., syndicated loans). A solution for this challenge would be to develop SOFR-based term rates, which are expected in the first half of 2021. However, the robustness of such rates would depend on the liquidity of relevant SOFR derivatives.

A second problem is that SOFR, without a bank credit premium, is not aligned with bank funding costs, and therefore opens up basis risk in banks’ asset liability management.

In many derivatives and some cash products, a compounded average SOFR is preferred to replace LIBOR, which naturally helps address the concern for the day-to-day volatility of SOFR. Exhibit 2 shows the comparison between three-month USD LIBOR and three-month compounded average SOFR since August 2014.2 The spread between them averages 0.29%, ranging between -0.78% and 0.91%. 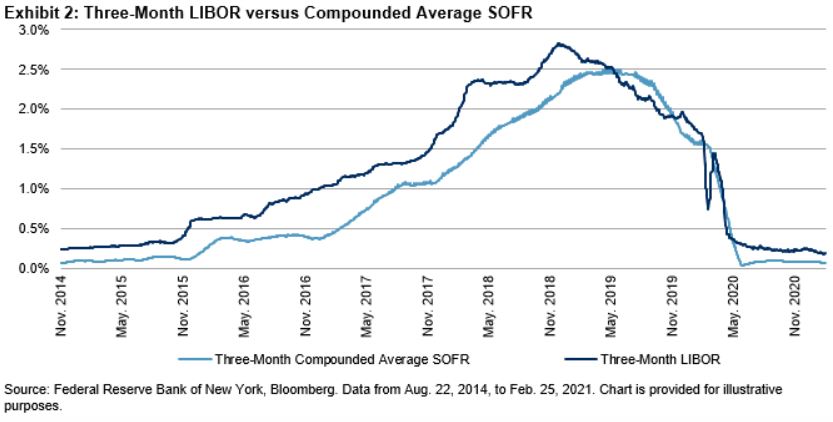 USD LIBOR is frequently used as a cash rate in an index that has a cash investment or requires funding. Exhibit 3 compares the cumulative returns of a cash investment using SOFR with overnight and three-month LIBOR. In annualized terms, a SOFR-based cash return was lower than those based on overnight and three-month LIBOR by 0.30% and 0.02%, respectively, over the past six and a half years.

SOFR is expected to replace LIBOR in a variety of financial products as benchmark reference rates. It is imperative to understand SOFR to identify the appropriate form of SOFR for LIBOR replacement and conduct impact analysis. 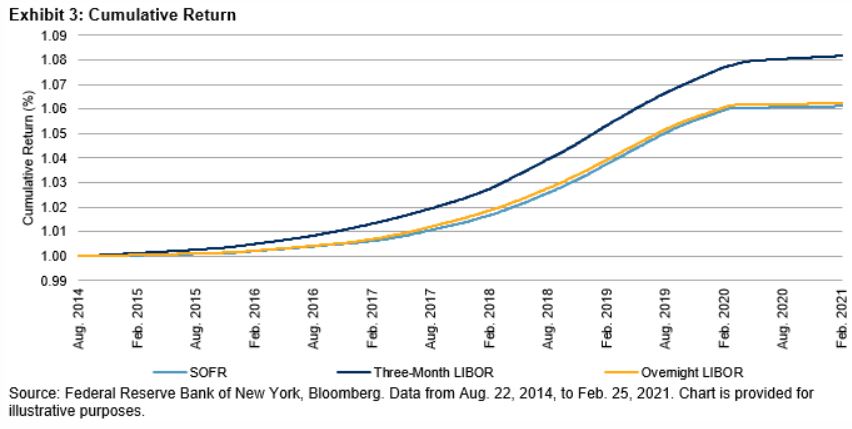 1 Michael Held: SOFR and the transition from LIBOR