Trump’s Unfinished Business For The Last Days of the Decade


Trump’s Unfinished Business For The Last Days of the Decade

The administration of President Donald Trump had seven major trade policy issues to address, as discussed in Panjiva’s 4Q policy outlook. With just over one month to go before the end of the year there are three broad areas where a resolution, or firm progress, is needed. None are hard, irrevocable deadlines though with the result that trade policy uncertainties for supply chain operators could continue into 2020.

Most pressing is the need to reach a deal with China. On Dec. 15 current U.S. rules provide for additional “list 4B” tariffs that could cover $155 billion of products imported from China in the 12 months to Sept. 30, Panjiva analysis, on top of $305 billion covered already. The incremental products to be covered by list 4B led by $39.3 billion of imports of mobile phones and $38.0 billion of laptop computers.

The latest round of ministerial trade talks between the U.S. and China “discussed how to resolve each other’s core concerns” according to the PRC Ministry of Commerce. There was also an agreement to continue talks.

Additionally there’s the complication of the need for a decision from President Trump on whether to support Congressional legislation regarding the security situation in Hong Kong.

The Hong Kong Human Rights and Democracy Act has passed the House by 417:1 following anonymous approval by the Senate.

The Act will allow the U.S. to apply sanctions in the event of China bringing legislation that puts U.S. citizens “at risk of extradition to mainland China or to another country that lacks defendants’ rights protection“. It could also allow the U.S. to remove Hong Kong’s preferential treatment under U.S. tariff rules.

While not formally linked, there’s a clear risk that a breakdown in relations over Hong Kong could overshadow trade talks. Indeed, China has already summoned the American ambassador to formally complain, Reuters reports.

The merchandise trade deficit remains the Trump administration’s preferred metric for whether trade policy is “working” or not – a lower deficit means aims are being delivered. In terms of the tariffs on China they are, increasing the likelihood that tariffs will be continued, extended and raised if a phase 1 deal isn’t reached.

As outlined in Panjiva’s research of Nov. 8, Chinese government data shows that exports to the U.S. fell 16.2% year over year in October while its imports from the U.S. fell by 14.3%, resulting in a reduced trade deficit.

The trade war has also taken a toll on total U.S. trade activity. Panjiva’s analysis of official U.S. government data shows that total U.S. trade activity dropped 5.6% year over year in October. That was the fifth straight drop and was the fastest rate of decline since Apr. 2016. It included a 6.9% slide in imports and a 3.7% decrease in exports and resulted in the lowest single month trade-in-goods deficit since Sept. 2017.

The slide in imports was driven largely by a 16.2% drop in industrial supplies, resulting from a decline in oil prices, while consumer goods imports dropped by 7.8%. The latter was likely the result of list 4A tariffs taking effect from September and was the fastest rate of reversal since Mar. 2016 on a reported basis. 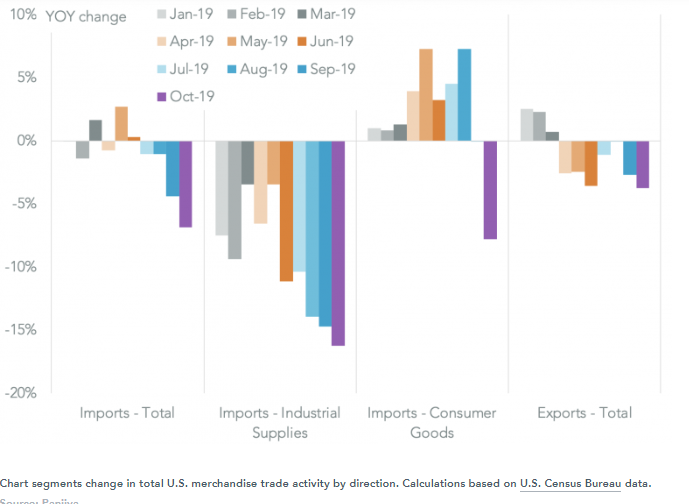 House Speaker Nancy Pelosi has stated that she is awaiting a text of the enacting legislation for the U.S.-Mexico-Canada Agreement before carrying out a “final review“, according to Politico. That follows a protracted period of discussions between House Democrats and the U.S. Trade Representative on topics including labor reform enforcement and pharmaceutical patent rules among others.

As outlined in Panjiva’s Oct. 1 report, Congress only have an up-down right to vote on the legislation, making its formulation – and acceptance by the Senate, President and potentially Canada / Mexico – critical. It’s worth noting that there’s only seven session days left in the year to pass the legislation in 2019.

In the meantime trade between the two has slowed to anemic levels. Panjiva data for Mexican exports and imports showed total trade in October increased by just 2.1% year over year after a 2.8% contraction in 3Q. That compared to growth of 3.7% in 2Q and 10.9% in 2018.

TRADE WITH MEXICO SLOWING WHILE USMCA IS DEBATED 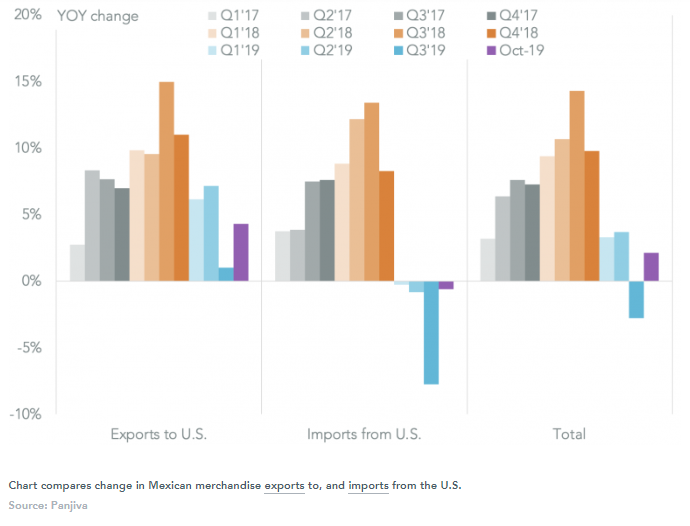 Deliver one mini-deal, avoid the next trade war

The Trump administration’s preferred format for trade deals appears to be to deliver an initial, “mini deal” before developing a fuller trade deal afterwards.

The approach has been pioneered with Japan where an initial deal focused on a limited range of products signed at the end of September is scheduled to be developed into a full trade deal by the end of January.

Aside from the Japanese government approving the deal there appears to have been little public progress towards a larger arrangement. Inside Trade reports that while the deal has been ratified by Japan’s parliament, the U.S. Trade Representative’s advisory committee has identified 18 areas of concerns that need to be developed in a full deal.

If Japan is the main opportunity, relations with the European Union are the main risk with a new European Commission set to take office from Dec. 1.

Relations have already been soured by the application of tariffs relating to a World Trade Organization aerospace subsidy case covering $9.3 billion of products in the 12 months to Sept. 30.

Two further outstanding tariff issues will define the start to negotiations. One is a section 301 of France’s proposed digital services taxes. The U.S. government applied a 90-day standstill in continuing the review / applying tariffs while negotiations towards formulating an OECD-wide settlement is investigated. That deadline has already passed on Nov. 26 suggesting a continued review of imposition of tariffs are possible.

The second is in relation to the automotive sector. The results of the section 232 national security review of the industry by the Trump administration are overdue. Indeed there was a legal requirement to decide whether to apply tariffs against the EU and Japan no later than Nov. 14. Should tariffs be applied from here on in there’s a good chance of a legal challenge. Arguably the review was mostly used for leverage to bring the EU and Japan to the negotiating table, a job that is now done.

The uncertainty won’t help though given the industry is already in a fragile situation with declining activity in terms of both sales and trade.

Panjiva’s analysis of official data shows total U.S. autos trade fell 5.3% year over year in October, the second decline and worst since at least 2011. That in turn was caused by an 8.6% slump in imports potentially reflecting reduced car buying as well as cut in components imports by General Motors due to its strike. Exports were still expanding with growth of 1.3% year over year in October, though that represents a marked slowdown from the prior three months. 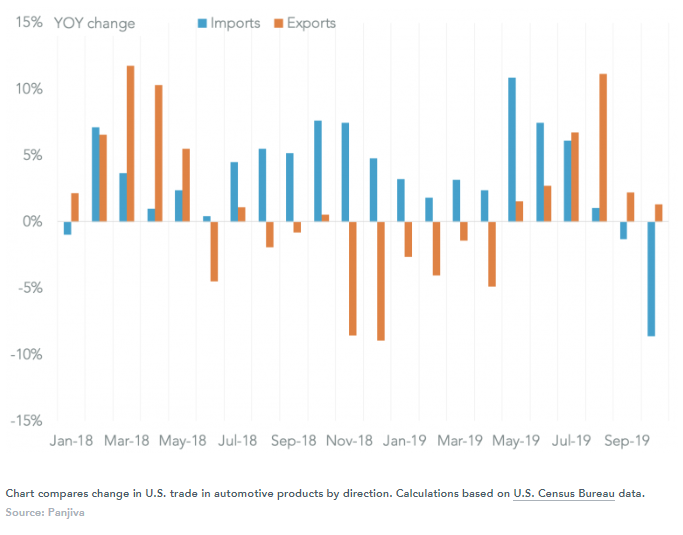