The Future of Banking: Virtual and Vital--Online-Only Banks Aim to Transform Taiwan Banking

The Essential Podcast, Episode 59: Elements of the Energy Transition #3 — Gadolinium


The Future of Banking: Virtual and Vital--Online-Only Banks Aim to Transform Taiwan Banking

New virtual entrants could revolutionize users' banking experience and shape the banking sector's growth by competing for niche, underserved segments, such as smaller businesses or the technically savvy younger generation that lacks a credit history.

Initial set-up costs and lack of scale economies will likely constrain profitability for virtual banks during their early development.

Investment in financial technology is a must for incumbent banks, but returns could be limited in the short term.

Taiwan's banking sector looks set for a jolt of innovation as virtual banks gain entry to the very competitive yet highly uniform industry. The Financial Supervisory Commission (FSC), which regulates the banking industry, has announced the three successful applicants in the first round of digital license offerings in Taiwan. We expect the entrance of virtual banks to bring modern financial services to niche markets, altering how customers use financial services and helping shape the future of Taiwan banking.

However, while virtual banks are likely to act as a catalyst for innovation and change, we do not foresee a significant impact on the industry's structural dynamics, given the size of digital entrants. Virtual banks each aim to tap into a slightly different customer base via their existing technology platforms or ecosystem by merging their online services seamlessly into customers' daily banking activities. These include well-established and often widely used e-commerce and communications applications that could be integrated into a wider digital banking platform. However, we believe the high initial set-up costs and lack of scale economies could constrain profitability for virtual banks in their early operating stage.

The decision by Taiwan's financial regulator to approve operating licenses for virtual banks opens the door to innovative new means of conducting everyday financial transactions and could see the first virtual banks launch banking services by the end of 2020. In our view, the competitive advantage of virtual banks rests in their ability to leverage their large established ecosystems in non-financial industries to draw clients to their banking platforms. They aim to improve accessibility to financial services to underserved portions of society--small scale businesses as well as the younger generation that have yet to build a credit history. In addition, virtual banks have the advantage of cost efficiency and greater technical agility over their pure brick and mortar counterparts.

We believe the regulator and consumers alike eagerly anticipate the benefits that financial technology (fintech) could bring the industry. The growth of purely virtual banking platforms could indeed be a stimulus for change, given the industry's somewhat uniform service offerings and structurally fragmented nature in Taiwan.

However, it might be hard for newcomers to build a strong franchise and turn a profit in the short term due to the competiveness of this market and the extreme price-sensitivity of banking services. 37 domestic banks serve a population of just 21 million in Taiwan, with the biggest three banks holding a combined share of less than one-quarter of all deposits. Moreover, state-owned domestic banks remain dominant in the local market and control about half of all loans and deposits despite recent aggressive growth by private banks.

Deregulation paving the way for fintech development in Taiwan has lagged behind that in regional banking markets and led to a slow adoption of fintech among Taiwan banks. This means that such new technologies have yet to make much difference, certainly in comparison to Taiwan's neighboring markets where vibrant fintech ecosystems exist.

Indeed, research by the non-profit Taiwan Network Information Center, shows there is a lot of opportunity for fintech to grow in Taiwan, given the penetration rate for online banking (the percentage of the sample population using online banking services) stood at just 35.6% in 2018, which is almost unchanged from that in 2017. Moreover, the most frequently used online financial services were simple in nature and involve mostly routine transactions such as fund transfers (73.4%) and account balance checks (48.9%) in 2018.

Who Are The First Virtual Banking Entrants?

Three virtual banks have been awarded franchise licenses, including Next Bank, Line Bank, and Rakuten International Commercial Bank (Rakuten Bank). Their business focus differ slightly in each case; Next Bank may go for small-scale lending and money management, Line Bank for online payment, and Rakuten Bank for e-commerce. Their shareholder structures also differ somewhat, including not only state-owned and private banks, a leading telecom operator, and the largest supermarket chain in Taiwan. 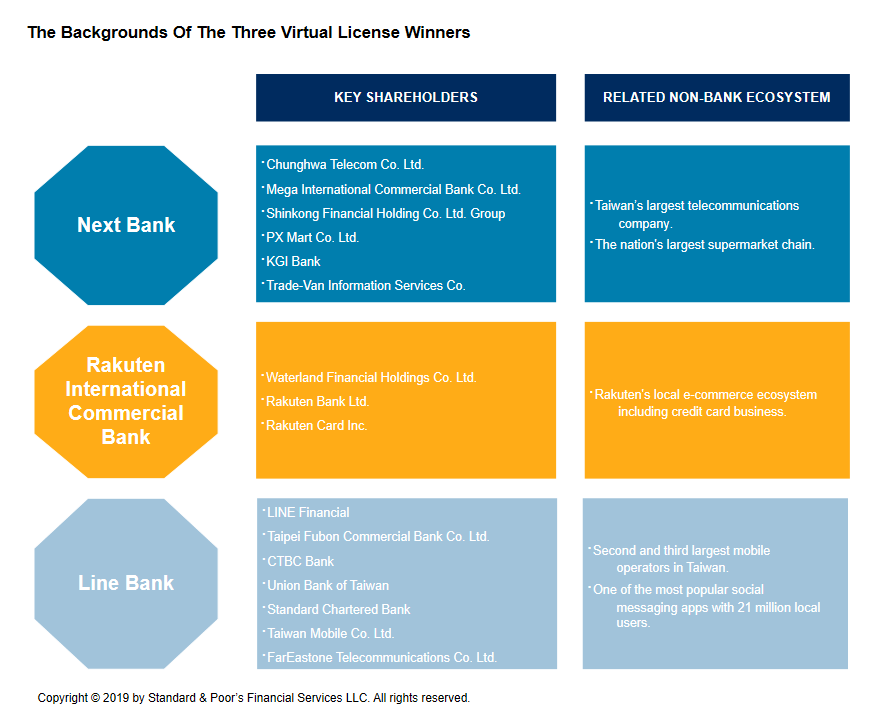 Given their makeup and backgrounds, we expect the virtual entrants will integrate financial services into their large existing technology platforms by leveraging their shareholders' resources. Some applicants have an experience in e-commerce and banking in other markets, which they could leverage as they enter Taiwan's competitive market. Meanwhile, other applicants have well-established social applications that give them means to penetrate the retail mass market in Taiwan.

In our view, virtual banks with access to a wide customer base through their digital platforms could access retail customers through interaction points that are not available to traditional banks. These include online social networking applications and e-commerce systems. In addition, virtual players with widely adopted, user-friendly technology platforms could embed banking services in customers' daily routines with greater ease than their traditional bank counterparts. 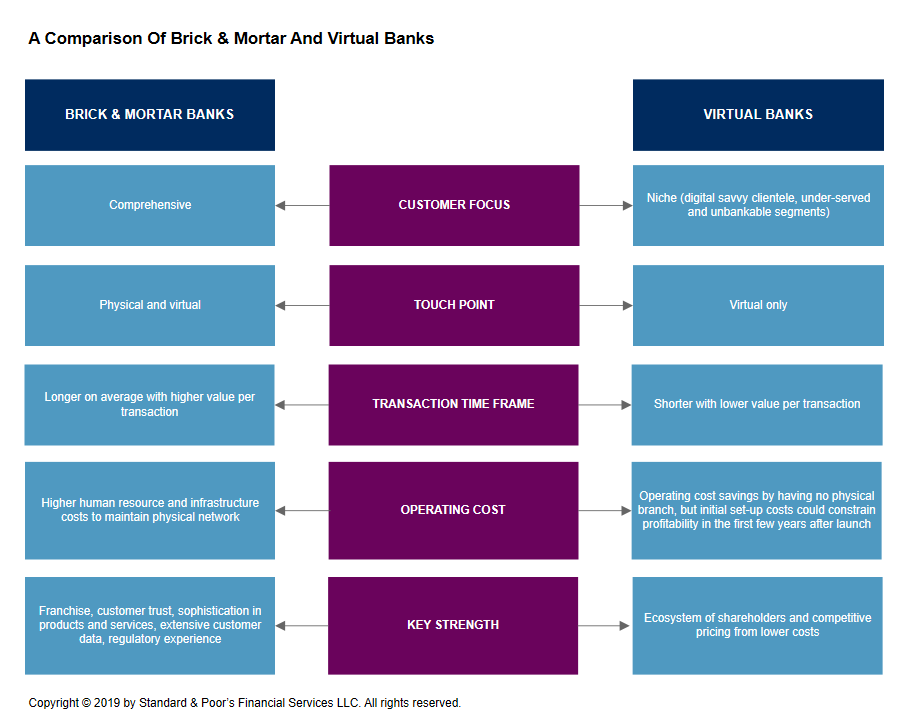 In recent years, virtual banks have launched across Asia-Pacific with several achieving strong growth. Virtual banks can utilize their abilities and efficiencies to target niche markets that are historically underserved or considered as 'un-bankable'. This includes younger customers without an established credit record or stable repayment ability according to banks' standard underwriting criteria.

However, we expect it will take some time for new virtual banks to breakeven despite the apparent cost advantage to virtual banks from lower expenditure on human resources and infrastructure in the absence of a physical branch network.

Start-up costs and an initial lack of scale will likely constrain profitability for virtual banks in the beginning. Virtual banks are subject to the same costs for regulatory compliance and risk management as ordinary commercial banks, which initially will be offset by a much smaller scale of operations. The regulator and central bank will also conduct close overview of virtual banks in their initial growth stage to ensure they meet the requirements for risk management and meeting these stringent requirements are sure to add to virtual banks' set-up costs.

Virtual banks are also likely to face higher funding costs because they will need to build their deposit base from scratch by attracting clients with competitive deposit rates and transaction fees. These costs are likely to weigh on virtual banks' profitability in the first few years of operation, depending on how fast they can build scale.

Investment In Fintech Is Essential But Costly

We expect Taiwan's physical banks to invest to keep pace with digital developments. We estimate banks will invest several hundred million New Taiwan dollars in fintech over the next two to three years, but the actual amount will vary greatly among banks. However, while digital transformation requires sizable investment, the financial returns aren't always obvious in the short term.

In our view, bigger and better-performing banks will likely find it easier to absorb the investment costs of developing this technology. Smaller players without stronger group support are unlikely to fare so well. Some Taiwan-based banks use strategic partnerships and alliances with fintech firms to supplement the bank's technical capability. Large players in the domestic banking sector as well as mid-size banks have also acquired stakes in one of the current franchise applicants to spread out their bets.

Many banks in Taiwan now offer some form of digital platform for core banking products. Most have focused their fintech-related investment on blockchain, automated-advisory services, and e-payments.

Several factors are likely to disrupt market dynamics over the next two to three years as a result of fintech's growing presence in Taiwan's banking sector. Chief among these is the growing threat of cyber security. In addition, changing expectations and behaviors as clients move from physical to digital interaction will complicate banks' relationship model.

However, incumbent banks are less likely to be worried about price competition, given that the Taiwan banking market is already saturated and highly price sensitive. We don't expect the introduction of virtual banks to alter the competitive landscape significantly over the next few years, because it will take time for the newcomers to build market share.

But the long-term impact could be more profound: new technologies may bring increasing turbulence and disruption to the relatively saturated banking industry. We are encouraged by this development. By bringing innovative digital offerings, we believe banks will tie customers more tightly to their platforms, especially the younger and more technically savvy clients. In any case, customers' increasing demand for product transparency and services innovation will pressure banks to compete or lose out.