A Super Fund Charts Its Path to Net Zero

Libra resolves some of the main issues related to cryptocurrencies as a means of exchange and store of value.

The main hurdle we see to its success is whether it will receive the regulatory approvals required across the globe.

If successful, Libra could disrupt some financial services activities--payments and money transfers most directly--but we don't see it becoming a reserve currency or a significant source of credit creation at this stage.

Jun. 25 2019 — The aims of the cryptocurrency Libra are ambitious. According to the white paper published on June 18, 2019: "Libra's mission is to enable a simple global currency and financial infrastructure that empowers billions of people."

If the Libra is likely to incorporate some of the characteristics of a currency--such as becoming a means of exchange--S&P Global Ratings thinks it is unlikely to become a reserve currency. Due to financial and macroeconomic stability concerns, we also believe national governments may prevent it from becoming a parallel source of credit creation outside central banks' monetary policy setting. In that sense, Libra can be seen as more like a payment system, similar to PayPal or WeChat, but with a blockchain and a currency.

We believe that, if Libra takes off, it will be subject to a substantial regulatory approval process. We expect some divergence in the regulatory stance across the globe, similar to that for other cryptocurrencies. Although the founding members are targeting a first-half 2020 launch, this level of scrutiny could imply either delays or limited scope in the initial roll-out. Interestingly, no banks are among the original list of 28 founding members of Libra. In our view, this is either an indication of skepticism regarding its potential success and concerns about the risks associated with it, or a sign of the potential negative effect Libra could have on banking business and revenue.

Libra Resolves Some Of The Problems We Identified With Cryptocurrencies…

Based on the white paper, we believe Libra could resolve some of the main issues currently underpinning the marginal expansion of cryptocurrencies. Traditional cryptocurrencies do not meet the two basic requisites of a currency--an effective means of exchange and an effective store of value (see "The Future Of Banking: Cryptocurrencies Will Need Some Rules To Change The Game," published Feb. 19, 2018, on RatingsDirect):

One difference between the Libra and other cryptocurrencies is that it will be backed by a reserve of assets intended to keep its value stable. According to the white paper, this reserve will comprise a basket of "safe assets," that is, bank deposits and short-term government securities. Libra as a currency will thus be similar to currency boards, pegged currencies, or the IMF's special drawing rights (SDRs). In this way, it is also potentially infinite, while some cryptocurrencies are finite by definition.

The white paper indicates that coins are minted when authorized resellers purchase them from the association, with fiat assets (in state-issued legal tender) that fully back the new coins. Similarly, coins are burned when the authorized resellers sell them to the association in exchange for their equivalent in fiat assets. Therefore, we understand that the current intention is not to create Libra without a specific fiat counterparty. This means that the Libra's value will depend on the assets held in the reserve and not on supply and demand dynamics. How conservatively these reserve assets will be managed will be critical to the stability of the Libra's value. Nonetheless, it is important to note that the Libra will not be pegged to a specific currency, but will still fluctuate as the value of the assets changes.

Libra's founding members include large payment companies, technology firms, marketplaces, and even some service companies. Global brands such as eBay, Uber, and Vodafone are on the list. This could help create an ecosystem that results in wider acceptance than we have seen for other cryptocurrencies. What's more, the use of blockchain and Facebook's broad reach, with about 2.4 billion users, means the Libra will potentially benefit from a wider audience and strong traceability. By opting for a "pseudonymous" approach, we understand that the founding members' intention is to allow external monitoring to avoid illicit activities--another challenge the Libra faces.

The Libra resolves certain governance issues faced by cryptocurrencies because its governance rules and body will be predetermined. The association will be governed by a council comprising one representative from each of the founding members. Decision-making will be based on a two-thirds majority and any change in reserve management policy will be subject to a supermajority. To ensure its financial viability in the first stage, the Libra will benefit from an initial investment by the founding members and the reserve asset revenue will be used to cover system costs, reduce transaction fees, and pay dividends to investors that provided seed capital.

…But Is Unlikely To Become A Reserve Currency

Given its backing by reserve assets, the Libra can become a credible means of transaction within its ecosystem. Users will pay for the privilege of using it by not receiving any interest. This seems acceptable in a low-interest-rate environment, but may be questioned if rates start to rise. We see a few hurdles for the Libra becoming more than a transaction currency. For starters, it doesn't really meet all of the criteria to be a long-term store of value and a reserve currency:

Unlike the current banking system, credit creation in the Libra system would mean that credit is created across borders. Governments are unlikely to let that happen without any regulation for two reasons:

What Businesses Could Be Disrupted And When?

We believe the Libra has the potential to disrupt a number of financial services activities. The extent and timing of disruption will depend on its acceptance by various stakeholders (including users and goods and services providers, but most importantly, regulators and governments).

We expect payment and money transfers to be affected most. We estimate that these activities represent on average between 10% and 15% of banks' total revenue globally, but their role in terms of customer relationships can in some cases be even more crucial, in our view. First, the Libra's backing by several large payment companies could potentially increase its acceptance from inception, and embed it within the existing fiat financial system. Moreover, some technology, market-place, and service companies would likely immediately accept it as a means of payment. Libra could also resolve problems related to the speed and cost of executing international money transfers. According to the World Bank, more than $600 billion is sent to various parts of the world every year. Reducing the costs related to these remittances is even one of the U.N.'s Sustainable Development Goals.

In our view, if widely adopted by retail clients, the Libra could eventually disrupt corporate payments. A key to success would be the ease and security of Calibra or the Facebook-backed digital wallet (see chart). 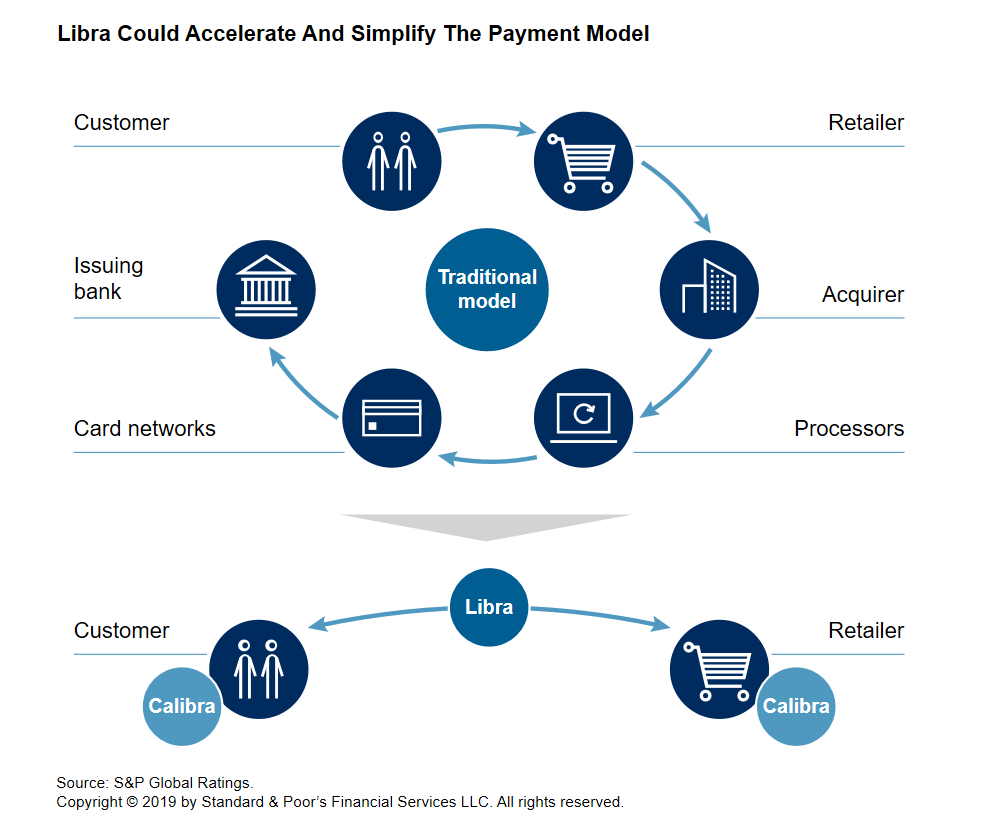 We also believe the Libra could increase the penetration of financial services in several countries, although we don't expect its launch will be as transformative as the advent of mobile banking. In some African countries, for example, some people have a Facebook account but not a bank account. Depending on the availability of services and whether regulators will tolerate it, Libra and Calibra could potentially enhance financial inclusion in many countries, given their limited prerequisites. A smartphone, a data plan, a national ID, and a fiat asset accepted by Libra would be the only requirements, and depending on that last factor could open up a very large potential customer base. Demand for micro-credits denominated in Libra could even emerge spontaneously, in places that are difficult for banks reliant on non-digital infrastructure to access.

We don't think the Libra will disrupt banks' lending businesses, at least in the short term. Unlike fiat money, Libra cannot be created without a fiat counterparty. However, shadow banking could get a boost as peer-to-peer Libra lending or, potentially, there could be the creation of entity that collects Libra from users for a small fee and lends it to other domestic or foreign users. It remains to be seen whether the Libra's creation process will change in the future or if the founding members and regulators will allow companies to use it as a currency for lending. We haven't seen this with traditional cryptocurrencies, given their significant volatility and the anonymity of users, which makes counterparty credit risk assessment virtually impossible.

Libra's Success Depends On Support From The Relevant Authorities

We believe that if Libra is to take off, it will be subject to a substantial regulatory approval process. To date, some governments have been more flexible with cryptocurrencies, while others have banned their use. We expect similar divergence in the regulatory stance on Libra across the globe. The Bank of England, for example, has asserted that it will approach Libra "with an open mind but not an open door." On June 23, 2019, as part of its annual economic report, the Bank for International Settlement published "Big Tech In Finance: Opportunities And Risks," which urged regulators to ensure a level playing field between Big Tech and banks under the "same activity, same regulation" motto. The founding members target a first-half 2020 launch, but we believe scrutiny by regulators, central banks, and other authorities will create delays or limit the scope of the initial roll-out.

In our view, factors fueling regulatory interest in this initiative will include, to name a few:

It's interesting that there are no banks among the 28 founding members, which raises the question of whether they are skeptical of Libra's potential success, wary of possible risks in light of the regulatory environment, or simply concerned that it could hurt their business model and revenue streams. Whether it gains material scale or not, Libra has already placed a spotlight on the current financial system's shortcomings, such as slow and expensive cross-border payments or transfers.

Either way, we expect that the evolution of payment infrastructure will accelerate. All actors are grappling with what is at stake. For governments and central banks, regulating this transformation will be a prerequisite to avoiding a possible privatization of monetary policy, and for banks and other financial services providers, keeping up with evolving customer preferences and further adjusting the pricing of payments and transfers appears unavoidable.