The market for European Guarantees of Origin, or GO, electronic tags that certify the source of renewable electricity, is evolving quickly.

S&P Global Platts has been monitoring developments, including the impact of recently-launched French auctions; price dynamics across regions and technologies; and where additional GO supply will come from in the coming years.

Here are the key trends that European utilities and other market participants should be following this winter: 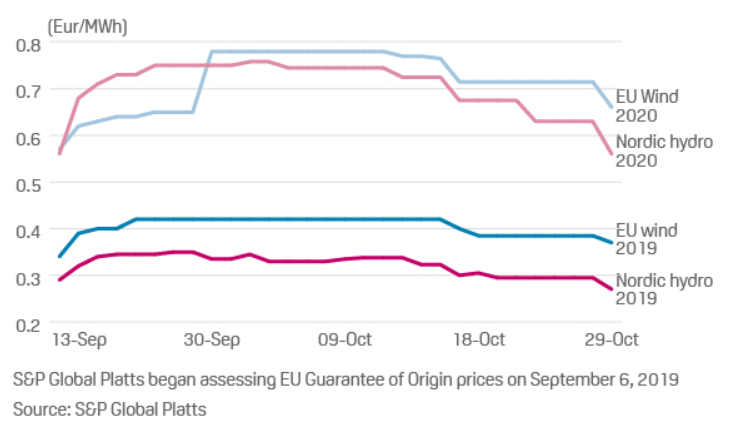 French GO auctions launched on the Powernext exchange in September. These made available for the first time GO issued from generation facilities benefiting from state subsidies, and generated clearer price signals for the market. The September auction, in particular, brought buyers into the market after the summer lull and saw prices increase into the beginning of October, including in the secondary market. However, the October auction saw rather limited activity and confirmed a somewhat lower price level for the market.

In the October auction, almost 2 TWh of wind GO sold at an average weighted price of Eur0.53/MWh, 14% lower than the average April wind GO auctioned in September. The other technologies were also auctioned at a lower level than in September, with solar seeing the largest losses, down around 40% at an average of Eur0.65/MWh for both months. Hydro and thermal were down 30% and 38%, respectively. 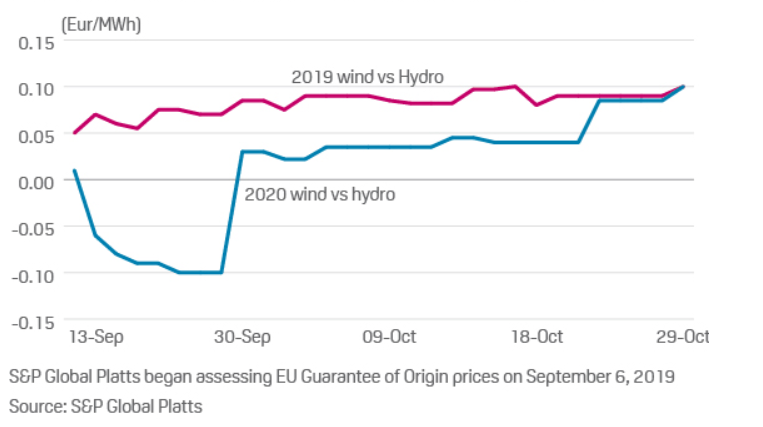 Nordic hydro GOs for 2019 have remained at a discount to corresponding EU wind GOs of less than Euro 0.10/MWh since Platts began to assess the contracts on September 6. For 2020 contracts, thin activity on EU wind GOs during most of September kept prices at a discount to Nordic hydro. But after activity picked up following the first Powernext auction, gains on the more liquid Nordic hydro contract were assimilated and brought wind to a premium again.

Since the beginning of October, the market has been characterized by selling pressure, according to traders, with further downside from healthy Nordic hydro stocks, last reported at almost 79% of reservoir capacity compared with 77.6% in 2018. This brought absolute prices below Eur0.30/MWh for 2019 Nordic hydro and below Eur0.40/MWh for the EU wind equivalent. Losses were stronger for the 2020 Nordic hydro contract, which fell to Eur0.56/MWh, after it rose as high as Eur0.758/MWh on October 10.

Market participants look at the actual and developing renewable additions across Europe since this will be where new supply of GO will be in the coming years. But nameplate installed capacity is not the only consideration – subsidy status can also determine whether those assets will have GOs associated with them.

In Spain over 2 GW of new renewable capacity has been installed so far this year, with 0.5 GW of wind and over 1.5 GW of solar constructed, according to the latest data from grid operator Red Electrica de Espana. This brings Spanish wind to over 24 GW of installed capacity and PV solar to 6.3 GW. Minor additions of around 60MW of biogas, biomass and other renewable generation has also been added this year.

France’s installed wind capacity has grown at one of the fastest rates in Europe in 2019. Around 1.6 GW of wind generation was added, taking total resources to 16 GW, although solar is less than 9 GW and has grown less than 0.5 GW, according to S&P Global Platts data. According to WindEurope, France will add over 9 GW of wind capacity between 2019-2023.

Italy currently has 20 GW of solar capacity and just over 10 GW of wind, with 0.5 GW and 0.4 GW added this year, respectively. Between 2019-2023 it is expected to increase its wind capacity by 5 GW, based on WindEurope’s figures.

Meanwhile, in Germany, market participants are waiting to see what will happen to 16 GW of old subsided wind capacity. One of the main hurdles to extending the lifespan of this capacity is obtaining planning permissions, as well as access to the grid, as plant owners would need to reapply.

If successful, this capacity would be eligible to produce GO tradable across national boundaries, unlike the current limitation on further marketing due to existing subsidies. Depending on how this capacity is treated, German wind GO could potentially move to a premium to other EU wind contracts from 2021. This would depend on demand from corporates for regionally-sourced GO bundled into power purchasing agreements, as seen in many similar PPAs across Europe.