Qatar and Saudi Arabia have several good reasons to finally settle their political differences. Agreeing what could be the gas deal of the century is perhaps the best.

The kingdom burned almost 900,000 b/d of valuable liquid fuels for industrial use and power generation in 2017, according to the Riyadh-based energy think tank, King Abdullah Petroleum Studies and Research Center.

Replacing this oil with natural gas could generate more than $10 billion of additional export revenue at current market prices, or add to its existing cushion of spare crude capacity that was recently tested by the attacks on Abqaiq.

Buying gas from Qatar is one of the cheapest ways for the kingdom to remove oil entirely from power generation, but first must come peace after a near three-year total breakdown in diplomatic and economic relations.

A partial thaw came this week when King Salman bin Abdulaziz invited Qatar’s emir, Sheikh Tamim bin Hamad Al-Thani, to attend a gathering of the Gulf Cooperation Council leaders in Riyadh later this month. Although the emir declined the invitation – sending his prime minister instead – the direction of travel is undeniable.

“While the kingdom has equally ambitious plans to expand non-associated gas production, Saudi Aramco’s track record in this arena is spotty at best. A gas deal with Qatar would be the rational solution to this conundrum, but Saudi would be loath to build a dependence on Qatari gas.”

On paper, Saudi holds the world’s fourth-largest gas reserves and is the Middle East’s third-biggest producer after Iran and Qatar. But output of natural gas – most of its current output is associated with its oil – could have been much higher had Saudi fully developed its resources. 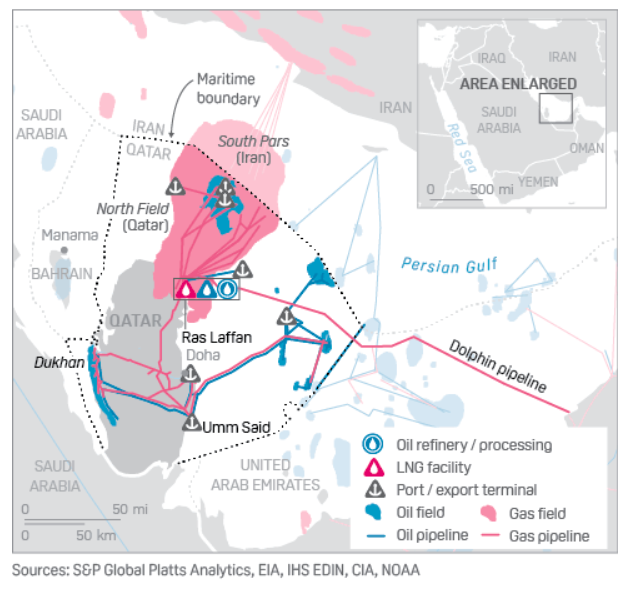 Twenty years ago it invited international oil companies including Royal Dutch Shell, Eni and Lukoil to explore for natural gas in its vast desert, known as the Empty Quarter.

However, the so called “Gas Initiative” was a disaster. By 2015 most of the companies involved had abandoned their quest, acknowledging the high costs and limited returns on offer partly because of the kingdom’s commitment to providing cheap subsidized electricity for its rapidly growing population of over 30 million people.

Despite these failures and the obvious advantages of importing gas from Qatar, historically Riyadh has obstructed its neighbours’ attempts to build a regional gas network between the Gulf Arab states. In 2006, the kingdom used a 30-year-old border dispute to threaten blocking the eventual opening of the Dolphin gas pipeline linking Qatar to the UAE and Oman.

Senior figures in Doha with knowledge of the issue had suspected gas, and not Qatar’s relationship with Iran, or its troublesome broadcaster Al Jazeera, may have been the real reason behind Saudi Arabia’s decision to orchestrate a regional boycott, effectively blockading its neighboring emirate.

They feared Riyadh was at one stage planning to invade and seize control of its underground wealth stored in the North Field – the world’s largest offshore gas field – because Qatar’s rulers refused to sell it the fuel at a sharply discounted price.

Instead, Saudi Arabia has increasingly eyed the potential of importing liquefied natural gas (LNG) from outside the region to help meet its domestic demand. Saudi Aramco has explored partnerships or investments in LNG projects, from the frozen seas of Russia’s Arctic to the US Gulf Coast and Africa. But with transport accounting for up to 40% of the costs of importing the fuel, finding suppliers closer to the Middle East would make more economic sense.

Qatar’s plans to radically expand its LNG industry could now bridge the divide between these former Arab allies. Doha has signed off on increasing its annual LNG production by a whopping 64% to 126 million tons by 2027. Saudi Arabia – the Middle East’s largest economy – would be the logical customer to mop up some of this LNG at the right price.

“Saudi Arabia will need to turn gas imports to feed its growing industrial and power sector gas demand, most likely with LNG imports on infrastructure-isolated west coast. Whether Qatari LNG will ever land there is a question that can only be answered in Riyadh,” said Mosis from S&P Global Platts Analytics.

Of course, many hurdles still exist to such a deal ever materializing. Despite the invite to visit the kingdom, feelings of enmity within Qatar towards the Saudi regime still run deep in some corners. The UAE is also hostile to bringing it’s gas-rich neighbor back into the GCC fold. It could be many years before trust is rebuilt.

If gas did tear Riyadh and Doha apart almost three years ago, it has the economic power to bring these energy superpowers back together again at the dawn of a new decade in 2020.