Low oil prices are an opportunity for India to stockpile: Fuel for Thought


Low oil prices are an opportunity for India to stockpile: Fuel for Thought

Oil storage is about the only thing in demand in the crude market right now.  The coronavirus pandemic has obliterated consumption and forced producers and traders to store more oil on the water as land-based facilities near tank tops.  While India will fill its caverns with crude, the lack of space means it’s also an opportunity lost.

The world’s third biggest oil importer is planning to fill up its strategic petroleum reserves in the coming months. India’s combined capacity of 5.33 million mt in three locations in southern Indian – Vishakhapatnam, Mangalore and Padur – is just over half full.

The timing is close to perfect.  There is a consensus among analysts that oil prices will remain under pressure. S&P Global Platts Analytics sees Brent crude trading below $20/b over the next couple of months before rebounding to $40/b by the year-end. Even the recovery price is low by recent standards and depends on the shape and timing of the recovery from coronavirus as people return to their cars.

But as far as SPR is concerned, India is behind major consuming countries and its Asian neighbours such as China, Japan and South Korea.  China’s total capacity is 550 million barrels, Japan’s SPR is 528 million barrels and South Korea has 214 million barrels. That compares to a paltry 39 million barrels for India.  For India, this equates to just 9 days of cover in the event of a disruption compared with 198 days for Japan at the other end of the spectrum.

India’s reluctance stems from the high costs of involved, not only in building out the tanks and necessary infrastructure, but also in maintaining and holding the oil.

That said, the Indian Cabinet has approved another 6.5 million mt of SPR under the second phase given the country’s reliance on oil. India’s crude imports averaged around 4.5 million b/d in 2019. 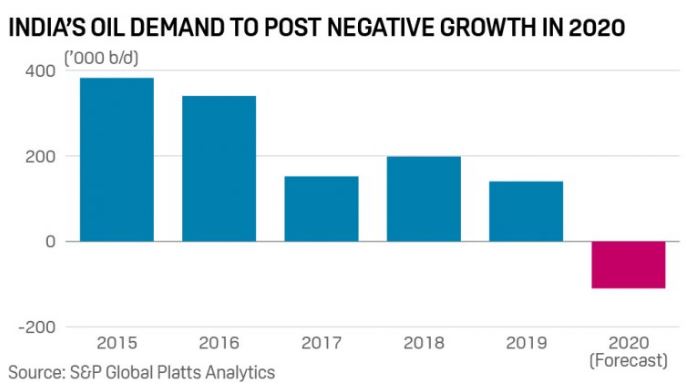 It is global storage levels that have been acting as a barometer of the oil market glut, and these are the reason commentators remain bearish despite the orchestrated production cut deal from OPEC+.  The deal calls on OPEC, Russia and nine other allies to cut 9.7 million b/d of crude production in May and June, ramping down to 7.7 million b/d for the second half of 2020, and then 5.8 million b/d for all of 2021 through April 2022.

G20 energy ministers have also lent their support to the production cut pact. The International Energy Agency said Wednesday that China, India, US and South Korea would take up to 2 million b/d out of the market by filling up their strategic reserves to support these global efforts, which would add some headroom to a market filling up quickly in commercial stocks.

IEA Executive Director Fatih Birol said: “This will provide greater headroom for the surplus supply peak in the coming weeks,” estimating these efforts could take out 200 million barrels. “Assuming they happen in the next three months this could represent as much as 2 million b/d of supply withdrawn from the market.”

Platts Analytics sees global storage levels bursting full in May. Space on land is running out fast and now participants have turned to the estimated 400 million barrels of floating storage pushing up freight rates for ships. Platts estimates up to 40 supertankers and 20 Suezmaxes are already placed on long-term charter. Some supertankers have been booked to store crude for up to three years, potentially the longest ever duration for floating storage.

Draining the stockpiles on land and sea may take years and with any production cut deal likely to take time to take effect, market forces are likely to have done the damage by then.

Goldman Sachs’ head of commodities research Jeff Currie told Platts last week that with storage running out, the time it takes for any production cut to take effect and the fact that the reduction won’t match up to the loss in demand, means it could be “too little, too late” for the oil market.  It’s a similar view shared by Platts Analytics.

The same could be said for India’s plans to store crude despite its good intentions.