The fast spread of coronavirus in Italy, along with measures to restrict individual movement – the harshest since World War II – has dragged down power and gas demand in the country and caused prices to collapse.

With government-imposed lockdowns coming into force across Europe since, the impact on the region’s energy markets is far from over.

Italy could be seen as a case study, as it became the first European country to impose far-reaching measures to curb the spread of COVID-19, putting 13 towns in the north under quarantine at the end of February. The government announced the lockdown of the affected regions March 8, extending the order to stay home to the entire country in two days.

Currently Italians are not allowed to leave home except for work, medical needs or emergencies. All schools and universities are closed, along with theatres, cinemas and museums. Only grocery stores, pharmacies, banks and kiosks are operating. The death toll has already reached about 3,400.

Most European governments imposed similar measures only a few weeks later, and countries around the region are already seeing a similar decline in key energy market indicators. For example, French industrial demand fell to its lowest since Christmas in the middle of this week. Multiple market players are expecting a similar situation in all neighbouring countries shortly.

In weather-adjusted terms, Italian total power demand dropped up to 9% on a daily basis during Week 11, according to S&P Global Platts Analytics. The largest impact is in the Centre-North price zone, followed by the Centre-South and the North.

Industrial demand in the North price zone historically has been more sensitive than residential and commercial demand to shifts in the status of the economy, according to Platts Analytics’ Giuliano Bordignon.

“That being said, all Italian shops except those selling essentials items or food are now required to close, and commercial demand might also be impacted this time around,” Bordignon said.

Industrial demand will be the key factor to watch to see the real damage done to the economy, multiple market sources said. During 2018 – the latest data available so far from Italian transmission operator Terna – industrials accounted for nearly 42% of overall power demand. The North price zone accounted for 65% of total industrial demand.

“There is a drop in consumption because most of offices, shop, factories … are closed. Industrial consumption is much bigger than the domestic one. The use of power from home cannot compensate it. There is a drop basically everywhere. It’s really an anomaly situation, but it is what it is,” an Italian power trader said. 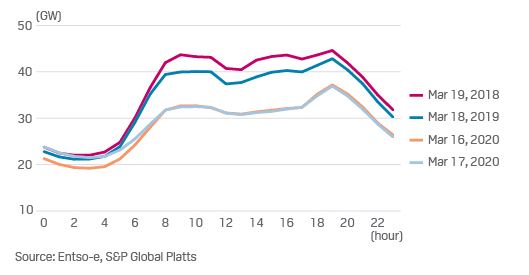 Closures in the steel and automotive sector give an indication of the scale of the impact on industry.

The northern districts of Brescia and Bergamo in Lombardy, the country’s industrial heart, have been particularly hard-hit by the coronavirus outbreak, shutting down the majority of steel producers and re-rollers. Lombardy alone accounts for nearly half of Italy’s 23 million mt/year of crude steel output.

Meanwhile, in the autos sector, Fiat-Chrysler temporarily closed down all assembly plants in Italy, which are spread across the country.

So far in March, overall industrial gas demand has fallen over 6% compared to the same period of 2019, averaging about 38 million cu m/d, according to Platts Analytics.

Both Italian gas and power prices were hit by the demand slump, registering large falls each trading session. For example, the April baseload power contract has dropped by over 23% since it started to trade as a front-month, priced at Eur36.50/MWh. The Cal 21 – which bears a great deal of risk amid global economic uncertainty – has lost more than 15% since late January, when the coronavirus outbreak intensified in China.

Natural gas prices on the Italian PSV – traditionally the most expensive European gas trading hub – saw large losses as well, its premium over the benchmark Dutch TTF falling by more than 25% across various forward contracts since the virus spread started.

Moreover, the virus hit at a time of major oversupply in European gas and power markets, with an influx of LNG dragging down prices to multi-year and even record-lows way before the outbreak. The lack of cold winter – which some market sources were hoping for and even counting on – became an additional bearish factor.

“We should not forget that the main trend is already bearish, these variables are simply adding bearishness in a market that is going down ‘by itself’,” the same power trader said.

Strong hydro generation became yet another bearish for already sluggish prices. Total Italian hydroelectric output has averaged 3.8 GWh/d so far in March, rising 27% on the year, data from Terna showed. The average output in March could climb slightly higher, reaching around 4 GWh/d, according to Platts Analytics.

Hydro historically plays a crucial role in Italian power mix during second quarter months, typically accounting for over 20% of total supply in May and June, according to Platts Analytics.

At the same time, Italian prices are still seeing some support from a decline in other renewable sources of generation. Both wind and photovoltaic power generation declined 16% on the year in March, with summary output averaging 2.4 GWh month to date.