Insight from Washington: US oil policy at stake in November presidential election

The US presidential election in November presents a stark contrast for the next four years of US oil policy that could shape supply and demand dynamics domestically and abroad.

President Donald Trump is expected to continue a deregulatory push to expand federal areas to drilling, ease permitting for pipelines and export projects, remain a vocal player in supply negotiations among OPEC+ producers, and keep a tight hold on sanctions against Iran and Venezuela.

Trump often touted US “energy abundance” in his first term to highlight economic growth and reduced dependence on Middle East imports. But the oil price collapse earlier this year has left US oil producers hobbled, making any federal deregulation in a second Trump term take a backseat to market forces.

US oil production is returning from peak shut-ins of 2.8 million b/d during this spring’s oil price crash, but drillers’ severe capital expenditure cuts will constrict output through next year.

US oil production increased 3.9 million b/d between Trump’s inauguration in 2017 and the onset of the pandemic in March, but the end to export restrictions in 2015, during the Obama administration, arguably played a bigger role than current White House policies. Trump has promised to continue a deregulatory push in a second term, after loosening methane rules and opening new offshore and arctic areas to drilling in the first. 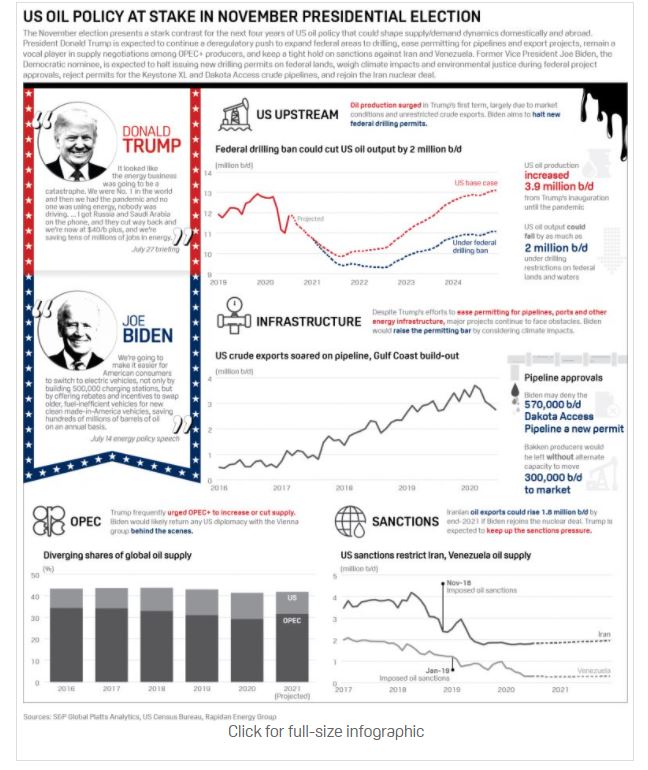 Biden’s selection of Senator Kamala Harris as his running mate could move his energy and environmental platform even further left, as she has embraced harsher measures to limit US oil and gas production.

“There’s no question I’m in favor of banning fracking,” Harris said during a CNN town hall in September 2019 when she was running for the Democratic nomination. Harris’ climate plan also mentioned closing the 2005 so-called “Halliburton loophole” that exempts fracking from federal oversight under the Safe Drinking Water Act.

Since picking Harris, though, Biden has tried to put this discussion to rest.

Rapidan Energy Group said Harris “will likely pull the Biden platform further left on a nationwide hydraulic fracturing ban and possibly a ban on fossil fuel exports (neither of which Biden currently supports).”

The election risks are clearly on the minds of US drillers as drilling data shows federal permit holders acting quickly to drill wells before a potential ban on new permits. Executives also had to field plenty of questions about the November possibilities during second-quarter earnings calls.

In North Dakota, home to the once-booming Bakken Shale play, regulators say holders of federal permits are among the few drillers staying active, along with drillers with significant hedged production.

“There is a great deal of discomfort and uncertainty with the potential November election,” said North Dakota Department of Mineral Resources Director Lynn Helms. “If people have a federal permit or right-of-way in hand, they’re acting on it even though it is expensive to do so at this time.”

Helms estimated that an end to new leases on federal lands would cut drilling permits by about 25%.

“It would be a significant negative impact,” he said. “It’s very substantial – we’re talking hundreds of thousands of barrels a day.”

The trend can be seen in other US basins, as operators holding federal permits have kept actively drilling wells while other producers have slowed drilling to a bare minimum in response to low prices.

In second-quarter earnings calls, executives spoke of continuing to act on federal drilling permits to build up a supply of drilled-but-uncompleted wells before any federal policy changes.

Hess CEO John Hess said that while his company had reduced its exposure to federal onshore permitting to less than 3% of its North Dakota acreage and “significantly reduced” its Gulf of Mexico activity through 2021, a potential regulatory shift holds major risks for the US economy.

“Any proposals that would restrict our country’s ability to explore, develop and produce that oil is going to be very bad for US jobs, very bad for the US economy and very bad for our national security,” Hess said. “So we hope when people are thinking about future policy, when it comes to federal lands, reason prevails, which would be in the interest of all US taxpayers and consumers.”

Permian Basin oil and natural gas driller Cimarex Energy signaled that it might have to shift some focus from its prime Delaware Basin assets in New Mexico to its Texas assets on private land. A third of Cimarex’s acreage is on federal land in New Mexico.

“Our federal acreage is located in some of the best part of the Delaware Basin,” said John Lambuth, Cimarex’s executive vice president of exploration. “It’s in the deepest part, it’s the most-pressured part, it’s oil in the reservoir, and it has some of the better water cuts.

“When we compare different assets, although they are all outstanding, by a little bit more you would say the federal acreage is very attractive to us and thus why we would want to get something done right now.”

EOG Resources CEO Bill Thomas sounded similarly optimistic that the driller would be able to shift focus to wells on private land if it cannot obtain new permits on its federal acreage. “We’ve got a lot of confidence that we can continue to generate and add non-federal potential that’s even better than what we have,” he said.

Pioneer Natural Resources CEO Scott Sheffield said he expects Biden to win based on current polling, which would bring significant risks to US drillers. But he said Pioneer has no activity on federal lands and “so should be unaffected” by a ban on new federal permits.

“I would expect pipeline infrastructure will be significantly delayed crossing state lines, [but] again, all of our acreage is in Texas, and we move our oil and our gas to the Gulf Coast,” he said.

ConocoPhillips CEO Ryan Lance said the driller has successfully secured federal permits and brought wells into production through 50 years of US presidential administrations, including “those that have said they want to shut the business down and those who want to accelerate it, and we still managed to get our projects done because we do it responsibly, we do it sustainably, and we follow the process.”

Tim Duncan, CEO of pure-play Gulf of Mexico producer Talos Energy, struck a similar tone: “It is our belief that being pragmatic on how to embrace the basin and its role in job creation, revenue generation for the federal government and our role in producing low-emission barrels will ultimately prevail politically.”