Jim Rogers is chairman of Singapore-based Beeland Interests, the owner and sponsor of the Rogers International Commodity Index. The index, also known as the RICI, is a composite, US dollar-based total return index designed by Jim Rogers in the late 1990s, and represents the value of a basket of commodities consumed globally, ranging from agricultural commodities to energy and metals.

Rogers spoke to S&P Global Platts Senior Editor Sambit Mohanty on the impact of the coronavirus pandemic about commodities and energy, the pain ahead due to the global recession and commodity financing challenges, as well as bright spots for the markets.

It has been more than two years since you were at Platts’ studios in Singapore. How have things been since then? Given what we are seeing now in the financial markets, will they be the same again?

We could have asked the same question after the Spanish flu collapse, after the Asian flu, after H1N1, after the huge collapse of 2008 and 2009. And you know what? Yes, they’re always the same. Human beings always get greedy and human beings always get scared and panic. They have not repealed the laws of fear and greed, ever. And you can go back to any tragedy or any triumph you want to, and people asked the same thing. Will things be the same later? And the answer was, no. But there’s always a new generation that comes along. They don’t know about 2008. They don’t know about the big bubbles in the past. And even if they know, they forget it. The main lesson of history is people don’t learn the lessons of history. They forget. They move on. 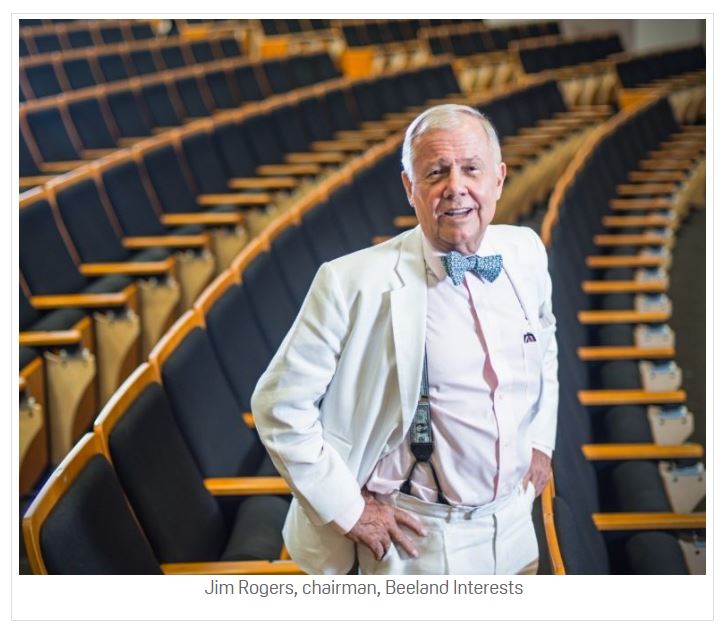 In commodity and energy markets, who do you think will be at the winning end and the losing end? And in this scenario, is there such a thing as safe haven?

At the moment, nearly all commodities are touching lows. Anybody who has anything to do with commodities – unless they’ve sold them short or unless they use commodities, are losers, except gold. But everybody who uses oil is a winner right now – Germany, China, Japan. People who consume oil think this is heaven. They think they’ve won the jackpot. Gold is up over the past seven or eight years. This is higher now than it was since 2011. So every commodity user is benefiting right now.

How do you see commodity markets panning out for the rest of 2020 and in early 2021?

I would suspect that most commodities now are close to the bottom. We’re in a period where the cure for low prices is low prices. In other words, when prices get very low, people use more of it and the producer produces less. China has opened up. Other countries are opening up again. So demand will go up again and prices will go up again. As I look around the world and all asset classes, the cheapest asset class I can see right now are commodities. Certainly not bonds – bonds are in a bubble. Most currencies are certainly not overpriced but certainly not as cheap as they might be. Stocks are certainly not dirt cheap anywhere. Everything I see that’s historically very cheap – that’s commodities.

S&P Global Ratings has said that the coronavirus pandemic is dragging the global economy into a recession. How long do you think it might take us to get out of it?

The last time I spoke with Platts, I said that the next time we have an economic problem in the world, it would be the worst in my lifetime. And it is – here it is. It’s not over yet. It’s going to get worse before it’s over. There’s going to be some rallies. But there’s too much debt. America was the largest debtor nation in the history of the world. And in the last month, Americans added several trillion – trillion with a T – dollars of debt and printed huge amounts of money. So the damage which is being done is going to take a while for people to recover from. There’s an election in November. They all want to be elected in November. All they care about is getting elected. But in the future, America’s got a problem of gigantic debt, not just at the national level, but also at the level of states, cities, as well and individuals. This is going to take a long time. In 1920, Great Britain was the richest, most powerful country in the world. But they started spending money and borrowing – doing the things that America is doing now. They lost. I live in Singapore. Many companies in Singapore are going bankrupt. This is going to leave a lot of scars and a lot of damage.

You mentioned bankruptcy. What are your views on the outlook for commodity trade financing, given that companies are going bankrupt and struggling to find finances? Do you expect even bigger and relatively more stable companies to face similar challenges?

It always happens in a crisis like this. In Singapore, where I live now, one of the largest oil merchants has collapsed and gone bankrupt. It is a huge shock to everybody. One of the largest banks is losing hundreds of millions of dollars because that company went bankrupt. I don’t know who’s next. I wish I did. We are already seeing major retailers in the United States going bankrupt. This is always what happens when you have a crisis. There are always people going bankrupt – there’s going to be more.

Let’s shift our focus slightly to Asia. China seems to be getting back into business. What do you think will be its recovery path?

Are there any other bright spots?

Sometimes the cure is worse than the disease. China’s opening up and many other countries are already opening up. People in Sweden got sick – they are no worse off than other people health-wise but their economy has not suffered as badly. So it seems to me that one lesson from this is that, nobody wants to die. Nobody wants to get sick. But if you just look around what’s happening in the world, closing off does not seem to be the best solution. But we’ll know. We’ll know in a year or two.

Assuming that in a few months, most of the countries will have the worst behind them as far as COVID-19 is concerned, what do you think will be the key factors commodity and energy markets would still need to watch out for?

They have to look at the same factors – supply and demand.  If we look at energy, for instance, known reserves of oil have been declining for years. And then along came fracking. Fracking was a miracle, but fracking turned into a bubble. If you could spell fracking, people would give you money to invest. Now, fracking is not going to disappear. It’s going to disappear for a lot of people because some are going bankrupt. But fracking is still going to be around, but it’s not a bubble anymore. And they have to worry about supply and demand like everybody else.

Sugar is down something like 75% or 80% percent from its all-time high. I don’t know many things that are down 75% or 80% percent from their all-time high. So all commodities dealers, producers and consumers are going to have to worry now about supply and demand. Most consumers are going to be better off if you are asking about the next year or two, except [those exposed to] gold. So most people are getting a benefit from this collapse, at least in their cost of living, if they have a job.

But now we all have to start worrying, including producers and consumers, about supply and demand because the price of most commodities are not going to stay down here where they are. I don’t think petrol is going to stay dirt cheap for the next five years, because production is starting to decline. So the answer is simple – supply and demand.