Edgare Kerkwijk spoke to S&P Global Platts Senior Editor Sambit Mohanty on how hydrogen is garnering attention among policy makers  and industry leaders in Asia as the  region prepares for energy transition. Kerkwijk is a member of the board of the Asia-Pacific Hydrogen Association, a regional industry platform that aims to promote the interests of the hydrogen sector. Its members include utilities, power project developers, equipment manufacturers, technical consultants and financial institutions.

What’s the outlook for hydrogen in Asia – the challenges and opportunities that the region presents for the clean fuel?

The outlook for hydrogen in Asia has become a lot more positive over the last six to 12 months. Countries such as Singapore and Japan are looking to increase the use of hydrogen in their economies, partly through hydrogen imports. Australia and New Zealand are looking to make blue and green hydrogen exports a key part of the future economy. South Korea and China are focusing on development and exporting their technology applications and are betting on making fuel cell vehicles part of the transportation sector. But of course there are a number of challenges. One of the key ones is that these are local national initiatives – what we need is regional cooperation – cooperation on a bilateral basis, like the recent transaction between Brunei and Japan, where they transported the first consignment of hydrogen.  We need to develop standards. We need to develop policies which would enable Australia and New Zealand to go into markets like South Korea, Japan and Singapore. 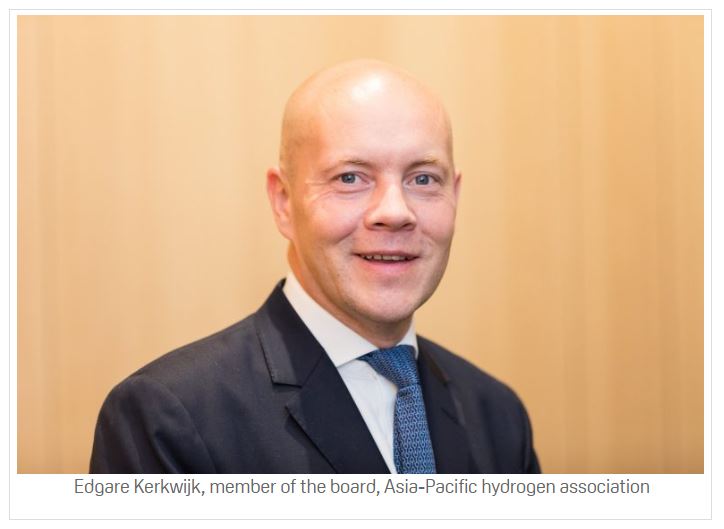 Go deeper: Listen to the interview with Edgare Kerkwijk in the Commodities Focus podcast

Do you think hydrogen will have an equally big opportunity in sectors other than the transportation sector in Asia?

We are seeing a lot of emphasis on the transportation sector. For example, even Australia has announced that they will start producing their own fuel cell vehicles in coming years. Japan and Korea are developing their own models and are commissioning and constructing more and more hydrogen fuel stations. South Korea and Japan are also leading the development of fuel cell vehicles, and companies such as Toyota are really at the forefront of this development. However, one of the other key sectors that we should look at is the potential for green hydrogen – if we can transport renewables from countries such as Australia to markets such as Singapore. So in addition to transportation, I think green hydrogen for power has the potential. We see a lot of development on this in places like Australia.

As the region’s interest in hydrogen grows, will Asia one day be self-sufficient in hydrogen? Or do you think it will be largely dependent on importing the commodity from outside?

I believe that in the long term the Asia-Pacific market could be self-sufficient, perhaps with imports from the Middle East. However, markets such as Hong Kong and Japan and Singapore will always need to rely upon inter-regional trade for hydrogen coming from places such as Australia or New Zealand, especially green hydrogen. Places such as Japan and Singapore just don’t have the ability to produce their own hydrogen. So you will see a lot of inter-regional trade. And that’s what some of the countries are betting on. But in the longer term, the region itself should be potentially self-sufficient.

Hydrogen can be produced from a wide array of pathways and feedstocks. But three pathways have garnered attention – steam methane reformation, biomass reformation, and electrolysis. In your view, which processes will companies and governments find easier in Asia?

Out of the many initiatives that are being developed in the region and are being announced now, I think that electrolysis is taking the lead, at least from a developer point of view. We see a lot of these developments taking place in Australia. There is a big push to see how we can transform renewable energy, for example, onshore or offshore wind, into hydrogen. And this is most efficiently done through electricity. There is also some hydrogen production being developed based on biomass but we don’t have enough feedstock for that.

In countries like India and China, because a huge amount of coal is available obviously carbon capture is going to be a key initiative that governments might push at some point. Do you agree with that?

At this moment we are still looking at the development and production of all forms of hydrogen, whether it’s gray, brown or blue. Having said that, I think the public is already frowning upon the use of brown hydrogen in their economies. There was some announcement recently on the brown hydrogen initiative in Australia, and that got a lot of negative feedback. So I think for the long term, it’s not a viable option for economies to use. So I believe that blue and green hydrogen together will probably be the key focus for many initiatives in the longer term.

Obviously, the ultimate aim would be to move towards green hydrogen. But what do you think are the biggest hurdles in getting there?

There’s a lot of talk and enthusiasm about hydrogen. But do you see the willingness of the private sector to invest in it?

The sector is relatively new. There are not that many large-scale projects yet that can be invested in. But what we hear and what we see [is] there’s a lot of interest from investors as well as corporates that want to invest in hydrogen. Even several banks have already started to look at project financing products for hydrogen installations. It’s very early days. There are not really large-scale projects that are operational and are profitable. Now, there are lot of pilot projects which are being funded by governments, but which will ultimately have to enable future commercial funding. I think that the sector is ready to be invested in. We see a lot of funds starting to have a look at what hydrogen can do to the economy and how they could invest in it.

There’s a lot of initiatives in terms of hydrogen development in Europe and in the Americas. Where does Asia stand compared to these regions?

I think Asia has probably one of the biggest potential because energy demand is going to increase further. But what I see in Europe is that there’s a lot more government initiative and cooperation taking place. Governments in Europe are really looking at how to use hydrogen in their economies. And, of course, the advantage that that the EU countries can work together – they have a common law and common policies. That really helps to drive the hydrogen sector. In Europe, for example, Germany has announced a big incentive for hydrogen as it wants to be the leader global leader in hydrogen development. I think that’s really being spurred by the cooperation that the EU has, among member countries. That is a disadvantage in Asia. We have many countries and there is a big potential. But we don’t really have a common market where we come together and discuss and incorporate common polices – that’s a key challenge for Asia.

In commodities, a transparent price discovery process makes it easier for the entire value chain to have visibility over supply and demand. How soon do you expect to see a marketplace for hydrogen?

Hopefully sooner than later – because it’s something that we really need. We will need to see a lot more transportation being done. Pricing needs to be developed. At the moment, production costs are not very transparent – different economies have different levels of prices. I think the market ultimately will need to move into a similar model as any other fuel market – having transparent pricing and information. I think that is very important for regional cooperation, not only for governments, but also for companies, producers and users. So I think the market definitely needs a regional hydrogen pricing platform where people can look and see what prices are being paid in different countries.