Hydrogen has a much lower energy density than natural gas on a volumetric basis. For this reason, end-users of a blended gas would require a higher volume of gas to achieve the same number of British Thermal Units versus end-users consuming pure natural gas. Hence, a 5% blending of hydrogen by volume does not directly translate into a 5% displacement of fossil fuel consumption.

As hydrogen blending increases, the average calorific content of the blended gas falls, and thus an increased volume of blended gas must be consumed to meet the same energy needs. For instance, a 5% blending by volume of hydrogen would only displace 1.6% of natural gas demand.

Pipeline injection has recently been featured in the national hydrogen strategies of the Netherlands and Australia, in addition to a host of small-scale pilot projects.

The graphic below shows the scale of various pilot projects exploring the impacts of hydrogen blending across countries. California has taken the lead on studying hydrogen injection in the US – with a Public Utilities Commission (CPUC) ruling from November 2019 giving utilities twelve months to propose a preliminary renewable hydrogen injection standard. 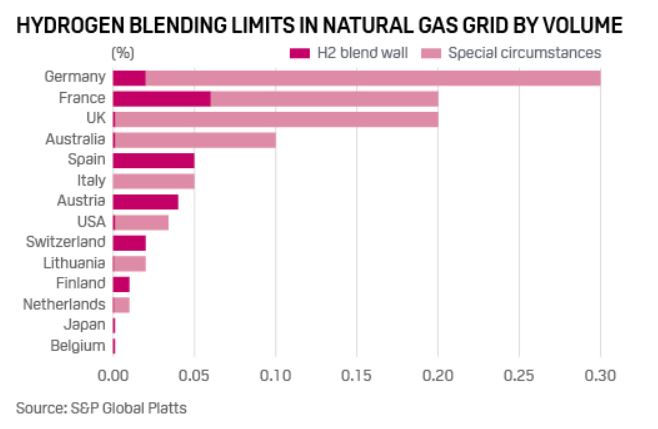 How the hydrogen is produced has significant implications for the emissions reduction achieved from displacing natural gas. Many policymakers, including California’s CPUC, appear to be hesitant to subsidize fossil hydrogen even in cases where CCS technology is employed.

Steam methane reforming (SMR) is the source of over 70% of global hydrogen supply today. If the   hydrogen were produced via this pathway without coupling with carbon capture and storage (CCS) technology, it would result in a significant increase in total emissions, a net increase in natural gas demand, and significant additional costs.

Assuming 100% of hydrogen were sourced from zero-carbon electricity, and energy delivered to end users was held constant, 5% hydrogen blending by volume in the California natural gas grid would reduce state-wide emissions by 2.0 million tons of CO2 in 2019, or less than 1% of state emissions.  Hydrogen production of this magnitude would consume over 16% of the state’s ample zero-carbon power generation.

Platts Analytics has found that, all things being equal, hydrogen blended into the natural gas grid has a low CO2 abatement potential versus other hydrogen-decarbonization end use strategies. A kg of zero-carbon hydrogen used to displace grid methane has less than 20% of the impact of an equal amount employed in some of the most effective decarbonization pathways such as low-carbon steel and materials production.

The benefits of hydrogen injection into the natural gas grid could extend past direct fossil fuel displacement and system decarbonization. Early 2020, the Dutch central government released their national hydrogen strategy, which outlined potential regulatory support for hydrogen injection mandates as a form of stable near-term demand for the product. That has the potential to give a boost to hydrogen sector development.

As seen in the graphic below, taken from analysis done by US utility PG&E, at lower blend volumes the natural gas grid and its end users would require very little adjustment to accommodate hydrogen. This positions the natural gas grid, given the appropriate regulatory mandates, as a very low-cost source of hydrogen demand, providing greater certainty for investors in hydrogen supply.

A ramping up of supply would put downward pressure on levelized costs via economies of scale and learning-by-doing. This could further improve the economics of  hydrogen in other applications with higher average per-kg decarbonization potentials.

At higher blending ratios, some retrofits to the grid may be necessary. Some costly challenges of high volume blending include steel embrittlement of pipeline material and damage to burners caused by fuel combustion aberrations.

Because of low production efficiency of modern electrolyzers and the relatively low carbon footprint of natural gas combustion versus other fossil fuels, hydrogen injection has a low average CO2 abatement potential per kg of hydrogen versus other zero-carbon hydrogen usages.

Grid injection is, however, an attractive source of near-term demand for hydrogen at low blend volumes due to low incremental costs. Increasingly, regions with aspirations to develop a low-carbon hydrogen economy are likely to turn to grid injection as a means of cultivating a market and stimulating investment into supply.