The spread of the 2019-nCoV coronavirus has continued with just under 18,000 cases reported globally according to Johns Hopkins University data. The event is still predominantly China-based though with 98.9% of the global outbreak located on the mainland.

As outlined in Panjiva’s research of Jan. 31 most corporations operating international supply chains are still engaged in a wait-and-see position given the outbreak is still in an early stage. Yet, with many regions extending the Lunar New Year holiday to Feb. 9, including Zhejiang and Guangdong provinces, the disruption to downstream supply chains around the world could be significant.

One example of a firm that has taken a more proactive approach to investor communications is Illinois Tool Works (ITW). The firm’s CFO, Michael Larsen, has stated that “we’ve baked into our guidance a lost week of production, assuming that we all return to work in China on February 10 … we’ll continue to monitor the situation closely.”

Panjiva data shows that U.S. seaborne imports associated with ITW have already fallen steadily during 2019 compared to a year earlier with shipments down by 72.0% year over year in Q4. That can be largely explained by stockpiling a year earlier ahead of the implementation of U.S. tariffs on Chinese exports, though shipments are still below the same levels of 2017. 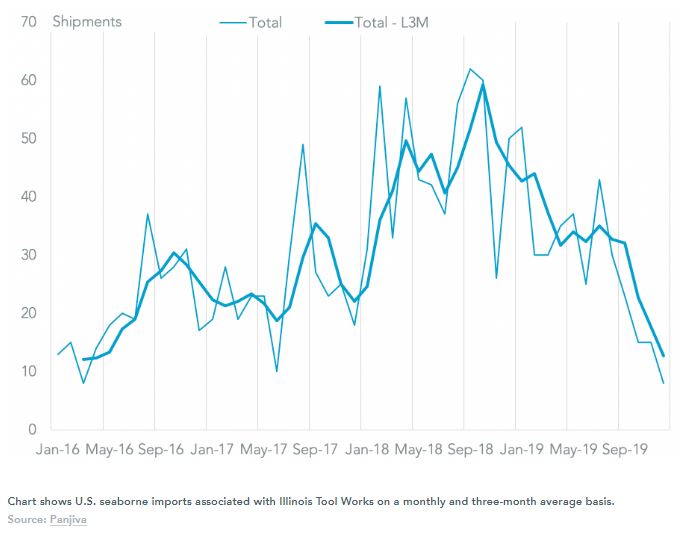 Shipments from China including Hong Kong represented 46.6% of the total in 2019, which was actually up from 41.3% in 2018 after the firm appeared to scale back its imports from Europe. The ratio from China, however, is still well below the 58.2% level in 2017 indicating the degree of supply chain restructuring that may have been caused by tariffs.

Looking at the regional exposure within China, 48.1% of the U.S. seaborne imports from China linked to ITW came from Zhejiang province and 11.9% from Guangdong – indicating the importance of the lunar new year break extension. The second largest regional exposure was to Fujian province with 20.0%.

ITW RELIANCE ON CHINA DOWN SINCE 2017 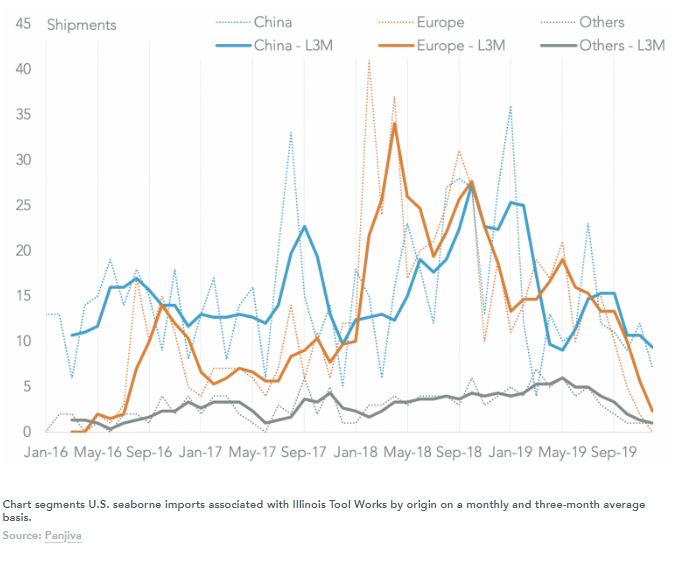