Although leading policymakers have recently sounded an optimistic tone on housing finance reform, several analysts think it faces the same doomed fate as a similar 2013 effort.

Ever since the Federal Housing Finance Agency placed Fannie Mae and Freddie Mac, known as government-sponsored enterprises or GSEs, into conservatorship amid the 2008 financial crisis, the government has dominated the housing market. Taxpayers were responsible for 78.5% of all first-lien mortgages in the first quarter, according to the Urban Institute.

Republicans and Democrats alike agree the system is unsustainable if not outright irresponsible. Treasury Secretary Steven Mnuchin has said politicians need to make sure they "don't put taxpayers at risk" by keeping Fannie Mae and Freddie Mac in conservatorship, and six years ago, then-President Barack Obama's Treasury Department issued a report that noted a "need to scale back the role of government" in mortgages. Despite bipartisan agreement that something needs to be done, there is little hope among observers that anything will happen.

I think clearly the act is gaining momentum and a lot of attention.

"It's a complicated issue," said Rob Couch, counsel for Bradley Arant Boult Cummings with expertise in the mortgage industry. "It takes a lot of brain cells to address all these things. Bless their hearts, that's not something people are anxious to do. Congress taking on complicated, difficult issues is tough."

In recent weeks, there has been increased chatter that housing finance reform could happen in the current Congress, which runs through 2018. Several Republicans have said it will be a priority. Rep. Jeb Hensarling, R-Texas, is particularly influential as the chairman of the House Financial Services Committee.

"I think the stars have aligned to get that done," Hensarling said in a July interview.

Sens. Bob Corker, R-Tenn., and Mark Warner, D-Va., issued a joint statement in June that they were "extremely optimistic about the prospect of congressional action on reform in the coming months." Regulators have spoken up about the issue lately, too. Federal Reserve Gov. Jerome Powell said in July: "We're almost at a now-or-never moment."

For observers following the issue, many of the quotes might sound familiar. In 2013, there was similar optimism around the Corker-Warner bill to reform housing finance, a bill eventually replaced by a largely similar piece of legislation known as Johnson-Crapo, named after Sens. Tim Johnson, D-S.D., and Mike Crapo, R-Idaho. Hensarling also had a bill in the House that he said was "gaining momentum and a lot of attention." Both bills would go on to pass committee votes but never receive a full vote.

We need to scale back the role of government in the mortgage market.

Several analysts said they are not convinced the rhetoric will turn into results this time around. There might be bipartisan agreement that the current situation is unsustainable, but the ideal form of housing finance remains hotly contested. Conservative scholars have pressed for wholesale elimination of any type of government guarantee with little concern that it might mean the end of the 30-year fixed-rate mortgage, a product uniquely prevalent in the U.S. But liberal scholars consider the 30-year mortgage a pillar of affordable housing and one that must be protected in housing finance reform. And the companies' stocks have posted tremendous gains recently as investors bet on a legal challenge to the government's control of the GSEs, adding yet another voice to the table.

Isaac Boltansky, an analyst for Compass Point Research & Trading who follows financial policy, pegs the chances of housing finance reform at just 10%. In July 2014, Laurie Goodman, co-director of the Housing Finance Policy Center at the Urban Institute, said she was not optimistic housing finance reform would occur in her professional lifetime. She confirmed that remains the case.

In addition to fundamental ideological differences at a time when partisanship appears on the rise, a limited calendar window could make housing finance reform difficult. Republicans have so far prioritized healthcare legislation and have failed to pass a housing finance bill in either the House or the Senate.

It is past time for us to modernize our unstable system of housing finance.

Further, some say, housing finance lacks an immediate need: Fannie Mae and Freddie Mac are immensely profitable and the housing market has bounced back.

"Housing finance reform is a very dull topic that most taxpayers and voters don't really understand or care about," Couch said. "As long as the system ain't broke, they're not itching to fix it."

That could change at some point in 2018. When the GSEs entered conservatorship, policymakers foresaw the possibility of inertia and wanted to ensure action. The GSEs will be prohibited from retaining capital in 2018, meaning a small loss could force another bailout, presumably triggering some type of long-term legislative solution.

"When you take a look at the economics and the slow but steady drain of capital out of them, I think it's important that it ends up being a priority," said Joseph Lynyak III, a partner with Dorsey & Whitney LLP. 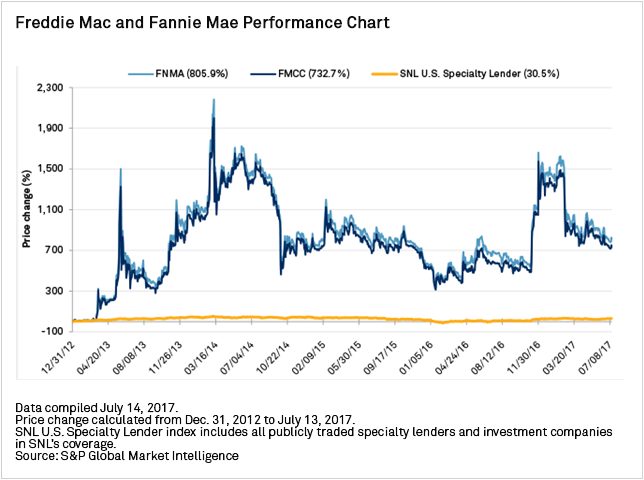 Brian Cheung and Syed Fariq Javaid contributed to this article.