High Levels of Dispersion across the Commodities Complex in May


High Levels of Dispersion across the Commodities Complex in May

At the headline level, it was a rather subdued month for commodities. The S&P GSCI gained 2.5%, taking YTD performance to 26.0%. While the S&P GSCI’s upward momentum attenuated, high dispersion in the performance of single commodities continued, albeit with reversals among the leaders and laggards. Most of the grains sagged to the bottom of the performance table after surging in April, while feeder cattle, silver, and gold switched ends of the table. Coffee offered an exception, with caffeine-boosting double-digit gains in both periods. 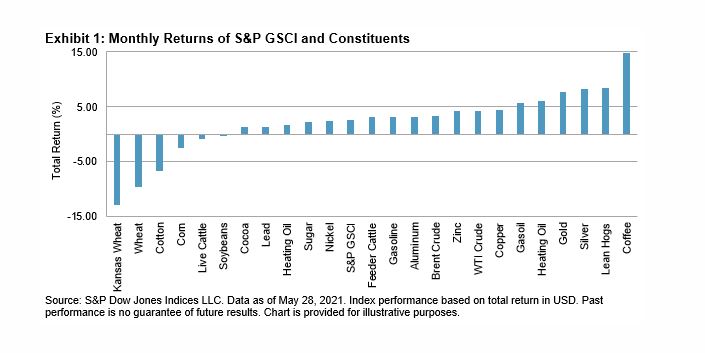 A more positive demand story across the U.S. and parts of Europe supported the petroleum complex in May. The S&P GSCI Petroleum gained 4.2% over the month. According to OPEC+, the oil glut built up during the COVID-19 pandemic has almost been depleted and stockpiles will decline swiftly in the second half of the year. Following various courtroom and boardroom defeats for Western oil companies in the name of cutting carbon emissions in May, OPEC and its allies could be afforded additional influence over global oil supplies in the years ahead.

News that Chinese regulators would show zero tolerance for monopolistic behavior or inventory hoarding in commodities markets did little to cool industrial metals prices in May. The S&P GSCI Industrial Metals rose 3.7%, while the S&P GSCI Copper gained 4.4%. Industrial metals continue to benefit from the world’s largest economies building back greener from the COVID-19 shock, while miners and investors remain reluctant to expand supply, despite the surge in prices. In the end, Beijing’s focus on curbing speculation may do little more than reduce liquidity on the local exchanges and reduce onshore metal stockpiles, which could have the unintended impact of putting upward pressure on prices in an already tight market.

It was a good month for precious metals. The S&P GSCI Precious Metals rallied 7.7%, as market participants switched their focus back to the risk of inflation and the U.S. dollar fell. The S&P GSCI Gold hit a near five-month high at the end of May, benefiting from a rebound in demand for jewelry, bars, and coins in China.

The S&P GSCI Agriculture finished the month down 3.2%. The complex was hit by a reversal in fortune across the grain markets, with corn and wheat ending the month notably lower. Rumors of China cancelling U.S. corn cargoes or limiting exports rocked the market, which until recently had enjoyed an impressive multi-month rally following an abrupt tightening of global corn supplies. It was a similar story in wheat; the S&P GSCI Kansas Wheat fell 12.8% over the month.