Even as Trump's EPA Takes a Back Seat, Economic Toll on Coal Generation Grows


Even as Trump's EPA Takes a Back Seat, Economic Toll on Coal Generation Grows

Despite executive actions by the Trump administration to restore coal production, economic forces impacting wholesale electricity markets continue to pressure coal-fired generation. S&P Global Market Intelligence estimates nearly 33 gigawatts of U.S. coal-fired generation will retire from 2017 to 2022. The Eastern Interconnect accounts for the majority of the retirements, with 16 gigawatts of announced capacity retirements going offline by the end of 2022 and another 10 gigawatts forecast to retire due to poor economics. More than half of the anticipated retirements in the east are within the PJM interconnection. 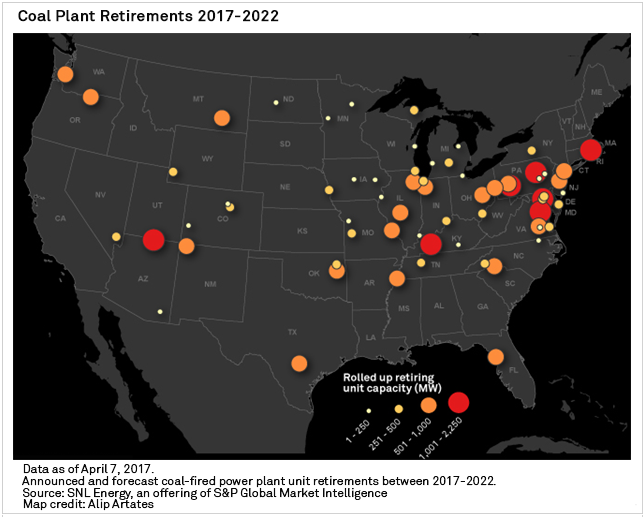 Approximately 6 gigawatts of coal-fired generation is also expected to retire in the Western Interconnect. A myriad of headwinds face coal power producers, including an aging fleet of coal plants and unfavorable economic conditions for the generation fuel. Natural gas continues to claim market share from coal due to relatively low gas prices and the flexibility and efficiency of gas-fired generation.

The growth of renewable electricity generation presents a notable headwind for fossil fuel generation, coal generation in particular. S&P Global Market Intelligence projects that between 2016 and 2023, a combination of corporate-sponsored wind and solar projects and mandatory renewable portfolio standards will push the market share for green energy from 6% to 10% of total generation. 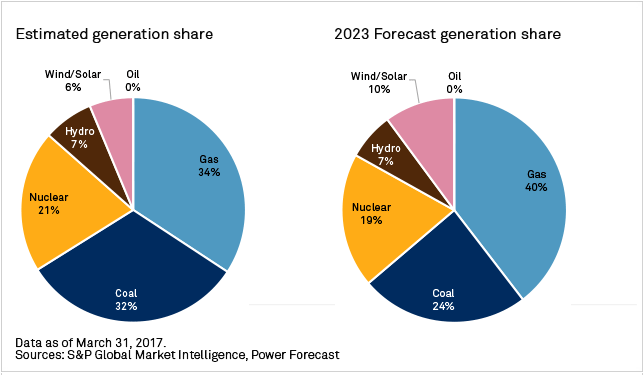 While this level of market share expansion by renewable energy may seem modest, it represents nearly 75% of projected wholesale demand growth through 2023. S&P Global Market Intelligence estimates that an additional 1% of growth will be served by net increases in nuclear generation. As a result, the effective market for coal- and gas-fired generation is forecast to grow by only 0.2% annually, effectively ensuring that coal and natural gas generation will remain in zero-sum competition in wholesale electricity markets for the foreseeable future.