L ow-cost, well-diversified exchange-traded funds are increasingly being used by institutional investors, and insurance companies are no exception.

While a rallying stock market likely helped boost carrying values last year, ETF usage has become more prevalent among insurers and is likely to increase given the number of low-cost, passive products that can support both broad and narrow investment strategies. 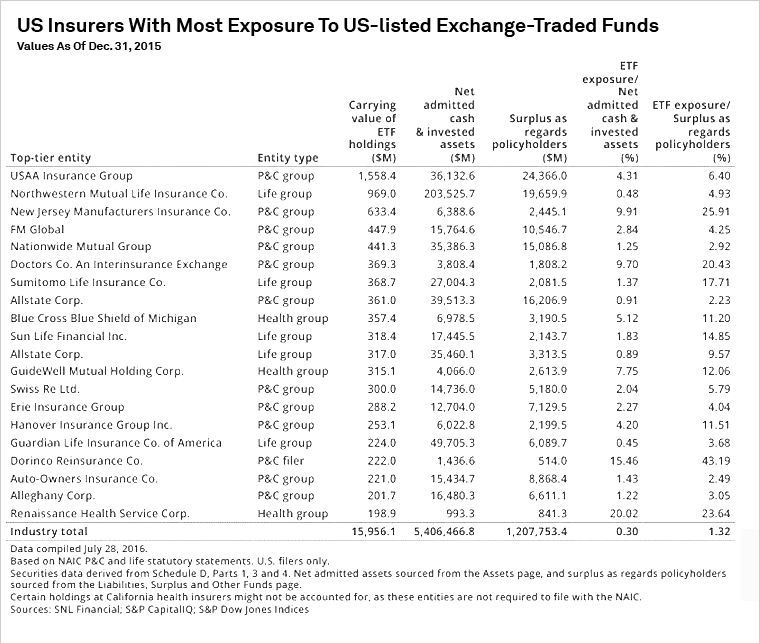 Other high adopters of ETFs, with more than 25% of their surplus as regards policyholders exposed to ETFs, included Dorinco Reinsurance Co. and Renaissance Health Service Corp.

The 10 most commonly held products comprised over 40% of the industry's total investments in ETFs, though the usage of these ETFs was different upon review of P&C, life and health insurance.

P&C companies held more exposure to equity ETFs than life and health insurers. For example, 68.2% of the roughly $490 million held by insurers in iShares Russell 2000 (IWM), which invests in small-cap stocks, was held by property and casualty firms like Allstate Corp. and Doctors Co. An Interinsurance Exchange.

Another example is Vanguard FTSE Developed Markets (VEA), which invests in European and Japanese equities. P&C insurers like Hanover Insurance Group Inc. and USAA held 90.8% of the insurance industry's roughly $280 million worth of investments in the ETF.

Equity ETFs were also the most common among life insurers, but, at the same time, they held a larger proportion of their overall ETFs in fixed-income vehicles than P&C insurers did. Of the most popular ETFs, the iShares iBoxx Investment Grade Corporate Bond (LQD) was held more widely by the life industry, with over half of the $568.4 million coming from life companies, including Guggenheim Capital LLC and Lincoln National Corp.