“Although the rapid growth of cryptocurrencies has captured global attention, the nascent ecosystem is skewed toward trade and investment rather than payments. We think authorities will play an instrumental role in the further development of the ecosystem through their controls over existing legal and financial systems,” S&P Global Ratings said in a report this week on the digitalization of markets. “A fast-growing and evolving new ecosystem of digital assets necessitates a new model of regulation and oversight, and the sooner the better. In addition to the regulation and oversight of digital assets, there are complex policy challenges and approaches to be formed related to monetary policy and ensuring the stability of global financial markets.”

As market participants from public finance to the power sector to  the banking  industry and beyond explore the possibilities of crypto, Wall Street’s top regulator faced pushback from Republican legislators for what they described as a practice of regulation by enforcement against crypto companies, alongside calls to action from Democrats for heightened consumer protection measures. Crypto companies have complained that the SEC’s regulatory regime is outdated, while the regulator itself has expressed frustration with such firms for not consulting with them for securities guidance.

Most recently, the SEC clashed with the public crypto exchange Coinbase when it notified the $50  billion market-capitalized company that it may pursue enforcement action over a new lending product, which CEO Brian Armstrong characterized as “sketchy” behavior in a 21-tweet response a week later. After making its initial public offering in April, Coinbase’s share price plummeted 32% by August as its number of active users declined alongside the falling price of bitcoin during the same period, according to S&P Global Market Intelligence.

“Currently, we just don’t have enough investor protection in crypto finance, issuance, trading, or lending. Frankly, at this time, it’s more like the Wild West or the old world of ‘buyer beware’ that existed before the securities laws were enacted,” Mr. Gensler said in prepared remarks to the Senate Banking Committee on Sept. 14. “I’ve suggested that platforms and projects come in and talk to us. Many platforms have dozens or hundreds of tokens on them. While each token’s legal status depends on its own facts and circumstances, the probability is quite remote that, with 50, 100, or 1,000 tokens, any given platform has zero securities. Make no mistake: To the extent that there are securities on these trading platforms, under our laws they have to register with the Commission unless they qualify for an exemption.”

Meanwhile, IPOs via SPACs—which provide companies a nontraditional route to debuting on public exchanges—have surged even as regulation has been left unchanged in recent years.

This activity has continued despite a slowdown prompted by new accounting guidance issued by the SEC under Mr. Gensler in April on warrants, which give investors the right to buy additional shares at a later date, that curbed both investor interest and the number of new SPACs due to increased uncertainty about equity valuations and increased regulatory scrutiny. As of Sept. 10, 493 SPAC offerings had hit the market, according to S&P Global Market Intelligence, with 80 backed by private equity or venture capital firms with an ownership interest of at least 5%.

With SPACs, “the risks are to investors and the disclosure to the investors,” Mr. Gensler told the Senate Banking Committee. “In essence, there's a lot of costs in these. Secondly, they usually have a two-year fuse and in that two-year fuse they try to go out and buy something. And a lot of the institutional investors, when that happens, sell. It's called a redemption right, and retail investors are often left holding the dilution, or the significant costs of the bankers and the promoters. So, we're looking at greater disclosures and if there's inherent conflicts along the way. And then try to put this out to notice and comment and rule-making."

Stronger crypto and SPAC regulations may be new to the U.S. but have already been explored in other global markets. In Asia, experts believe more cohesive regulations on crypto assets can protect banks and customers from the complex and volatile aspects of the market. Regulators in the United Kingdom have tried to lure SPAC listers to London markets with more relaxed rules.

“At its root, market digitalization is powered by technology capabilities that can both complement and disrupt established market frameworks and business models through the formation of a digital ecosystem and a new set of operating rails,” S&P Global Ratings said in its report. “As a result, market participants will design and implement entirely new workflows and operating regimes, where the degree of disruption to established intermediaries will be driven by several variables, including technology capabilities, scalability, and the pace of adoption by market participants.”

Today is Friday, September 17, 2021, and here is today’s essential intelligence. 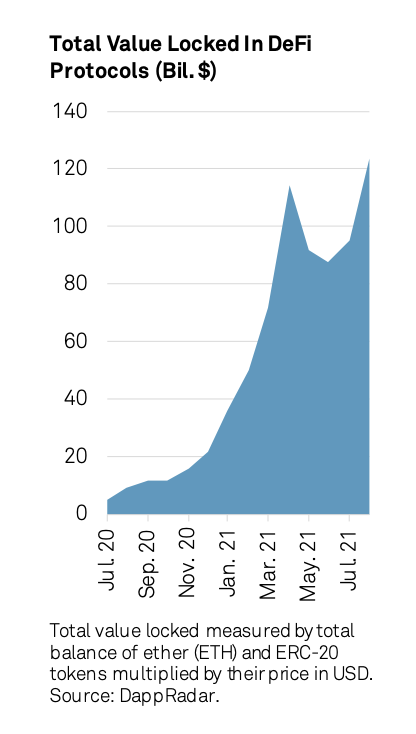 Following the surge of interest in decentralized finance (DeFi) since last summer, it remains to be seen whether DeFi will completely transform traditional financial products or simply complement and optimize them.

Blockchain: What's Under The Hood

Blockchain technology removes the need for a trusted central party for settlement and clearing, and has the potential to revolutionize how digital value is recorded and transferred.

Capacity limitations have so far prevented blockchain technology from realizing its potential, but the key to unlocking scalability is in sight—in the form of important compromises.

S&P Global Ratings believes the emergence of central bank digital currencies is a question of when, not if. CBDCs aim to fulfill the two basic requisites of a currency: act as an effective means of exchange and an effective store of value. They can be issued using traditional, blockchain, or a hybrid technology of the two. 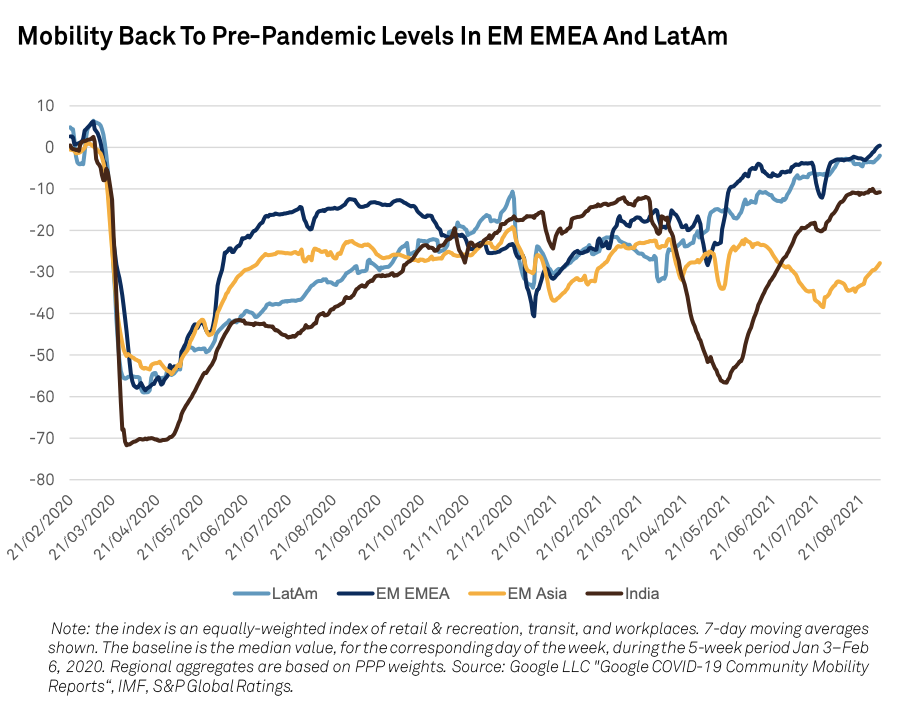 Generally, reported second-quarter GDP growth figures in EM EMEA and LatAm were better than expectations. The Delta variant didn't have as much of an impact as expected on domestic activity, and exports expanded rapidly. Mobility is close to, or above pre-pandemic levels, suggesting a limited upside from further re-openings. 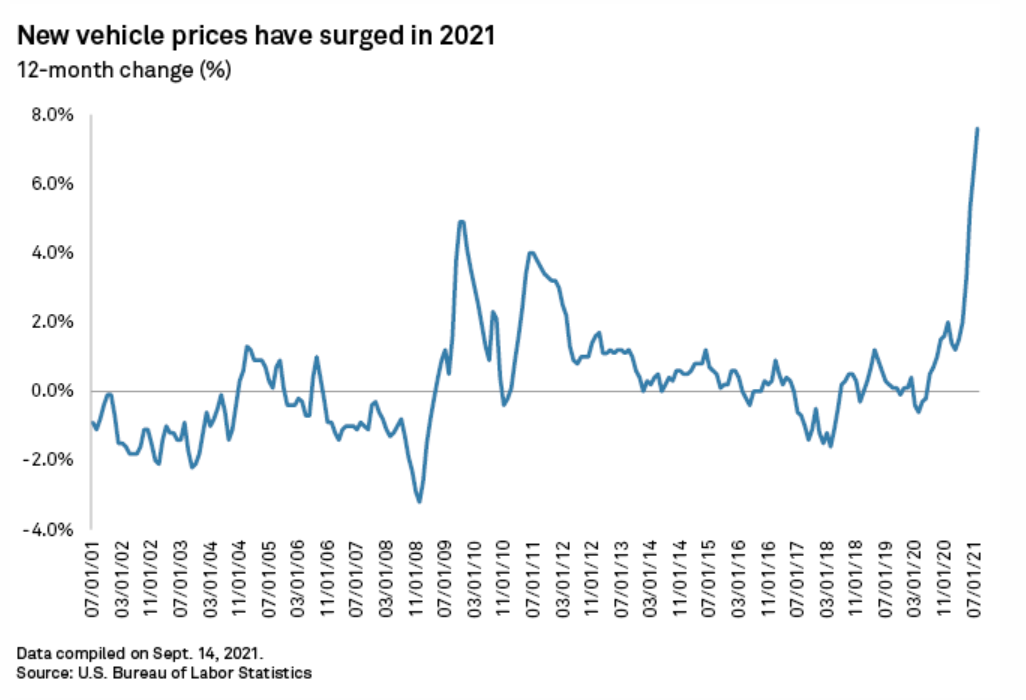 Faced with a global shortage of semiconductors and other needed parts, dealerships are facing a historic inventory shortage as demand for new cars climbs from pandemic lows. Cars are selling before they are even taken off delivery trucks, dealers are paying as much as $10,000 over retail prices at auction, and dealers have few options but to wait for supply to rebound.

Energy industry officials in the Midcontinent Independent System Operator region are hesitant to increase the use of cloud computing in the sector because they are uncomfortable with cybersecurity risks the technology poses, stakeholders told the MISO board of directors Sept. 15. 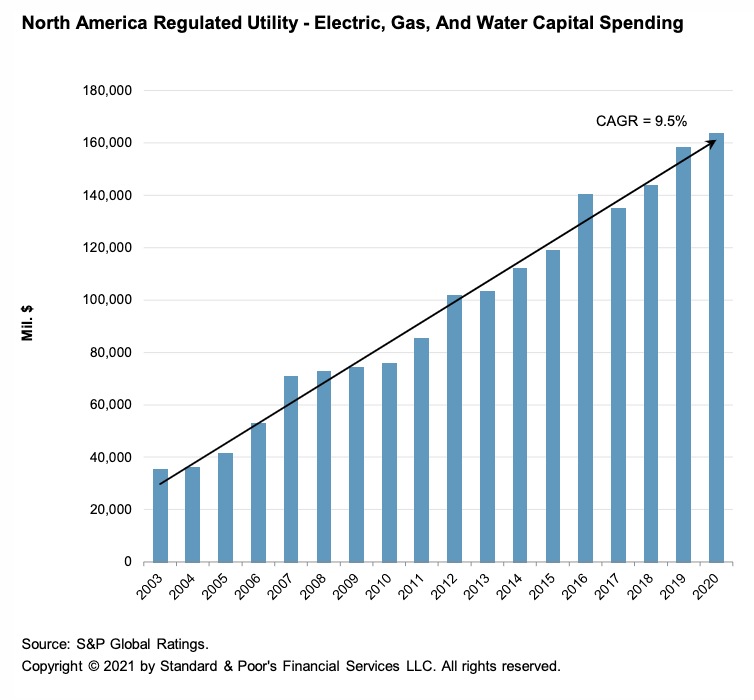 Although BP, North America's most prolific gas marketer, plans to help lead the world's energy transition and become a net-zero company by 2050 or sooner, natural gas will continue to be part of the equation to meet the globe's ever-growing energy demand.

Energy and environmental companies are advancing projects that can tap into valuable rare earth materials locked up in coal and coal waste, a potential boon for power generators, mine operators and mining communities that is supported by the U.S. government.

Democrats' sweeping climate stimulus package would impose royalties on U.S. hardrock mining for the first time, and miners fear the fees would kill the domestic industry.

Listen: Will The Delta Variant Prevent A Rebound In Oil Demand This Year?

The IEA may have revised down their oil demand estimates for the third quarter of this year, but looking further ahead both OPEC and IEA expect demand to bounce back despite fear of potential new lockdowns and new variants. As for Brent crude, the current pressure on prices could soon cease amid a strong improvement in refinery margins. In this episode of the Oil Markets Podcast, S&P Global senior editors Robert Perkins and Emma Kettley discuss with Eklavya Gupte what is currently holding back Brent prices and when is global oil demand expected to recover.

Demand for jet fuel in Asia is likely to be on the path to recovery, with some countries opting to reopen even as the spread of the delta variant of the coronavirus lingers, middle distillate sources told S&P Global Platts.

More Than A Quarter Of U.S. Gulf Crude Still Offline Since Hurricanes Ida And Nicholas

About 28% of U.S. Gulf of Mexico crude production remained offline Sept. 16 in the aftermath of hurricanes Ida and Nicholas as the offshore energy sector continued to move slowly toward a return to normalcy with an another two months left of the Atlantic storm season.