House of Representative Democrats propose raising the capital gains tax to 24% from 20% instead of President Joe Biden’s initial plan of 39.6%, increasing the corporate tax rate to 26.5% from 21% rather than Biden’s 28% ambition, and hiking the top tax rate for individuals earning more than $435,00 annually to 39.6% from 37%, according to details released by legislators on Sept. 13. Republican policymakers are expected to unanimously oppose the changes that would reverse—at least in part—the Trump Administration’s Tax Cuts and Jobs Act of 2017. Other proposals put forth by the Biden Administration that are under consideration, including the governmental budget and infrastructure packages, feature tax provisions that, if passed, would incentivize greater investment in and engagement with clean energy companies instead of fossil fuel firms.

Private equity mergers and acquisitions across all industries and sectors have surged 89% year-over-year from Jan. 1 through Aug. 31, to 301 deals, in response to the Biden Administration's proposed capital gains tax changes, according to S&P Global Market Intelligence. Such activity involving U.S.-based private equity sellers this year spiked the day following the first indication of the capital gains proposal, with 171 deals announced from April 29 through Aug. 31, up 3% from 166 in the previous period.

"Tax changes are probably one of the biggest triggers that exist" to spur private companies into responding to buyout offers or engaging in selling processes, ClearRidge Managing Director Matthew Bristow said in an interview with S&P Global Market Intelligence. As the timeline for finalizing deals shortens ahead of the potential tax change, even the idea of new policy "increases the likelihood that the two sides would compromise and actually close the transaction,” he added.

Within Congress’s $3.5 trillion budget reconciliation package, Democrats have pushed for the inclusion of tax incentives for clean energy, manufacturing, and transportation. Clean energy advocates have called for the addition of tax incentives for stand-alone energy storage, high-voltage transmission projects, and transmission investment alongside the allowance of direct cash payments over clean energy tax credits for all companies, including energy providers without tax obligations. The proposed bill also includes the introduction of fees on methane emissions that could increase tax burdens on the U.S. oil and gas industry.

“Many renewable-energy developers in the U.S. often use tax-equity partnerships as a means of financing large renewable-energy projects. In forming these partnerships, the project developer receives cash in exchange for portions of future tax benefits and cash flows associated with the respective project. In recent years, developers have raised tens of billions of dollars using this lever to finance many project builds,” S&P Global Ratings said in a recent report. “We expect tax-equity partnerships to remain a viable use of financing for the renewable energy industry over the near- to medium-term. Should the tax rate increase, we expect that the number of tax-equity investors would also likely increase, broadening the market.”

The proposed tax policy changes are seen by many market participants as essential to realizing the Biden Administration’s aggressive climate policy and net-zero goals.

"Action to address the climate crisis must be taken across the board, and key among many policies is a foundation of strong federal incentives for clean energy," 52 U.S. clean energy organizations, including the American Council on Renewable Energy, Advanced Energy Economy, and Solar Energy Industries Association, said in a join Sept. 7 letter, according to S&P Global Platts. "This year's legislative opportunity is the best, and possibly the last, chance we have to put the country on a path to a clean economy in a timeframe that avoids the most catastrophic climate impacts."

"A stable, long-term, full-value clean energy tax platform is foundational for decarbonizing the grid and will create millions of good-paying American jobs," Gregory Wetstone, president and CEO of the American Council on Renewable Energy, told S&P Global Market Intelligence. "Congress must act with clarity and conviction now to seize this once-in-a-generation opportunity to enact a comprehensive climate policy able to meet the challenge before us."

Today is Wednesday, September 15, 2021, and here is today’s essential intelligence. 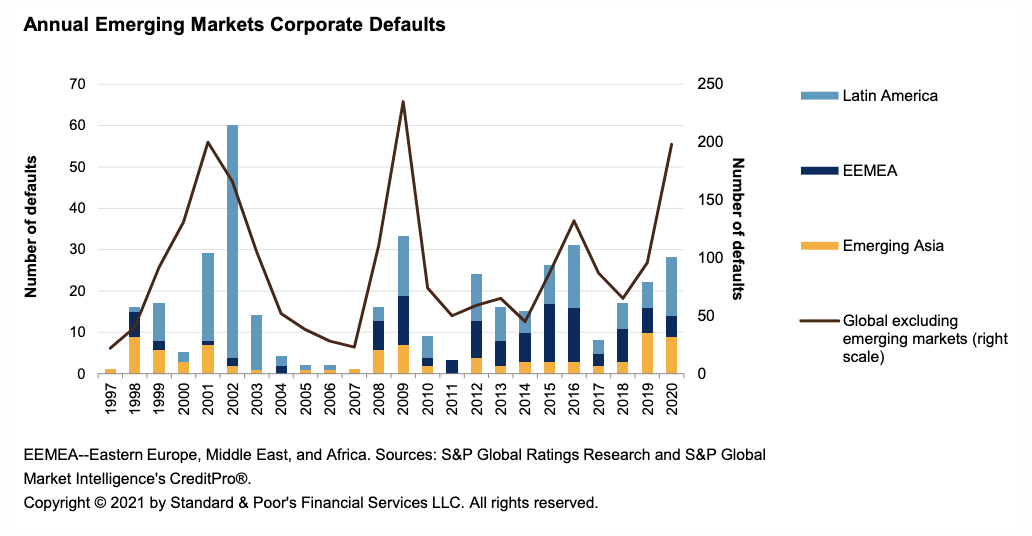 The federal government must raise its $28.4 trillion debt limit soon or suspend it in order for the U.S. to be able to pay its bills. The Treasury Department estimates the limit could be reached as soon as October. Congressional Republicans plan to oppose any debt ceiling increase in order to slow President Biden's economic agenda:

There were 14 defaults from companies rated by S&P Global Ratings in Latin America in 2020, amounting to $8.2 billion in outstanding debt. The Latin American speculative-grade corporate default rate rose to 3.95% in 2020 from 1.22% in 2019 amid the COVID-19 pandemic, oil price shocks, and a rise in the number of speculative-grade issuers. 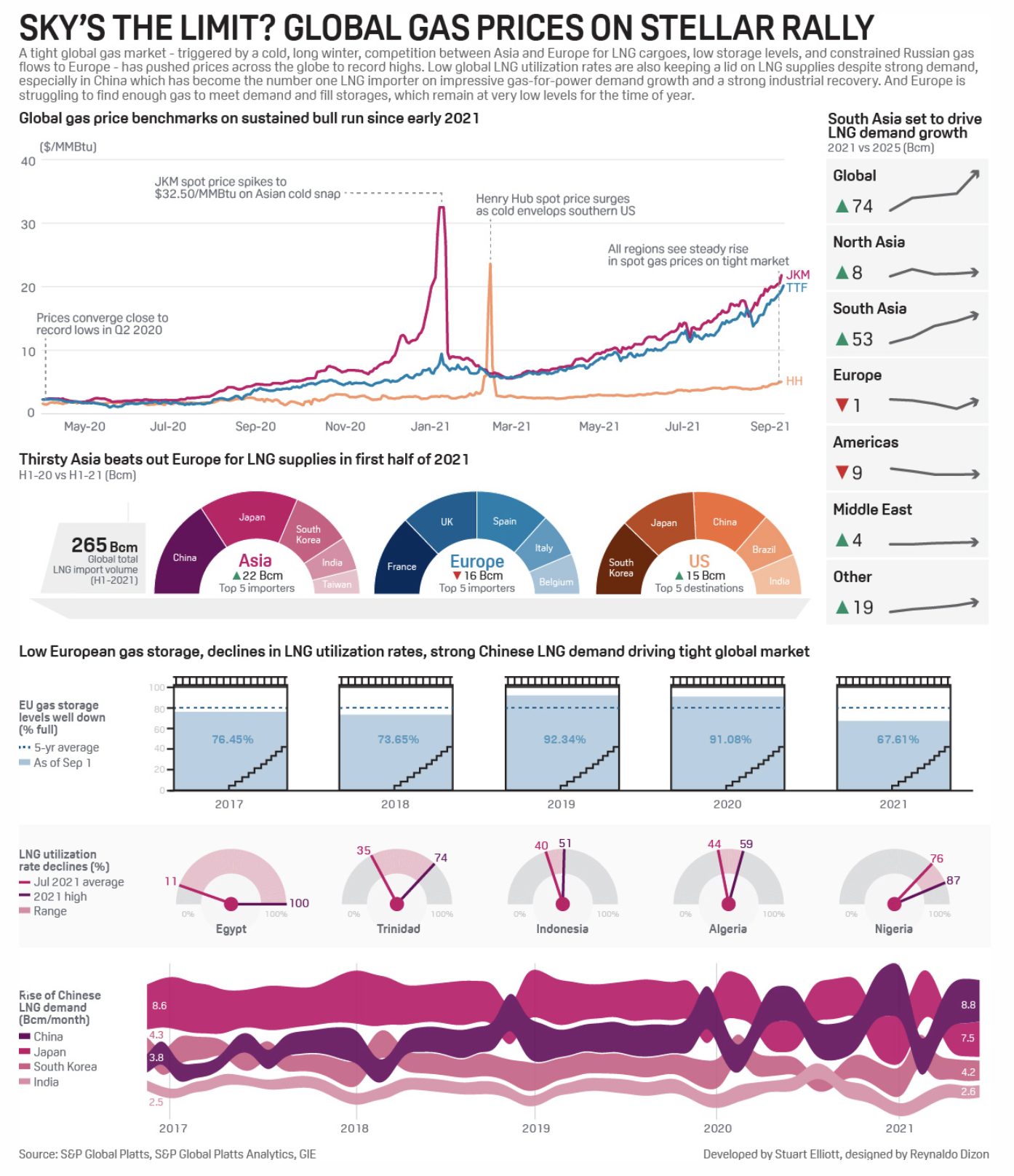 A tight global gas market—triggered by a cold, long winter, competition between Asia and Europe for LNG cargoes, low storage levels, and constrained Russian gas flows to Europe—has pushed prices across the globe to record highs. Low global LNG utilization rates are also keeping a lid on LNG supplies despite strong demand, especially in China which has become the number one LNG importer on impressive gas-for-power demand growth and a strong industrial recovery.

Shares in most pure-play shale gas producers posted double-digit gains in value over the past month, alongside the one-third increase in the October futures price for natural gas, according to Sept. 14 data from S&P Global Market Intelligence.

The White House Sept. 13 announced plans to nominate three commissioners to the five-member US Commodity Futures Tradition Commission, potentially helping to avoid a long period of dwindling numbers on the five-member commission, which regulates commodity derivatives. 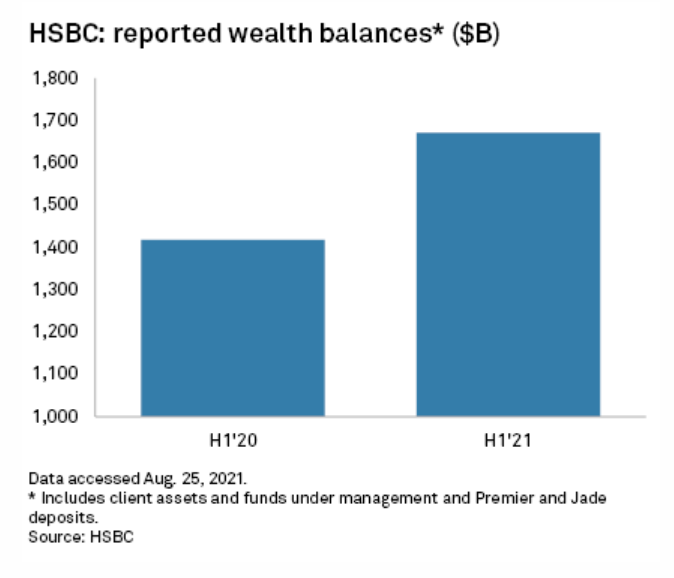 HSBC Holdings PLC is lining up further acquisitions in Asia as it targets wealthy consumers and is confident it can steer a path through the challenges of operating in Hong Kong and China.

China's distressed asset managers will continue to sell their noncore businesses to reduce their leverage after the biggest bad bank in the country needed a state-led rescue this year to prevent possible contagion effects on the financial system, S&P Global Ratings analysts said. 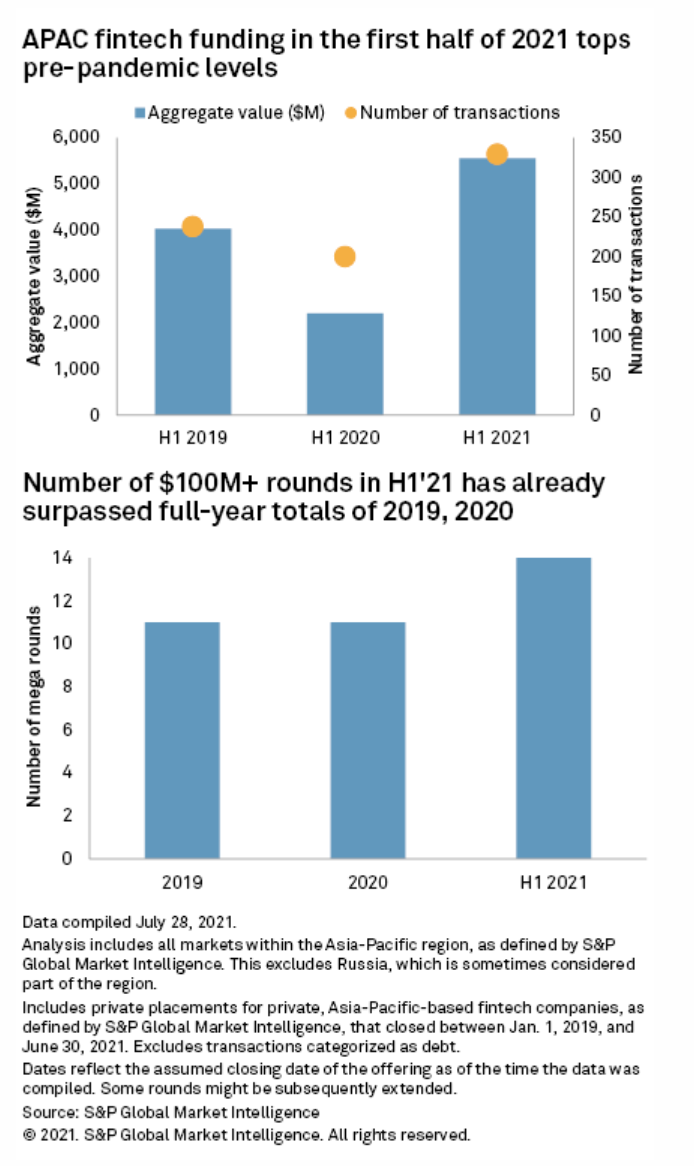 Riding the tailwind of an increased digital adoption catalyzed by the pandemic, Asia's financial technology startups are raising funds at a pace faster than before. Large fintechs have embraced acquisitions as a mechanism for growth and the relative ease of raising cash could drive more M&A activity.

Given the ongoing shift toward digital, fintech companies now have a better chance of attracting investor attention, after specialty finance and asset managers dominated IPOs in Australia's financial sector in the past three years.

Enterprises Are Missing Out On $24B By Not Optimizing Cloud Spending, Not Going Multicloud

Across the global IaaS market, businesses are missing out on significant savings by sticking to on-demand pricing. Cloud providers have created an array of cost-saving mechanisms that many, but certainly not all, businesses are taking advantage of. 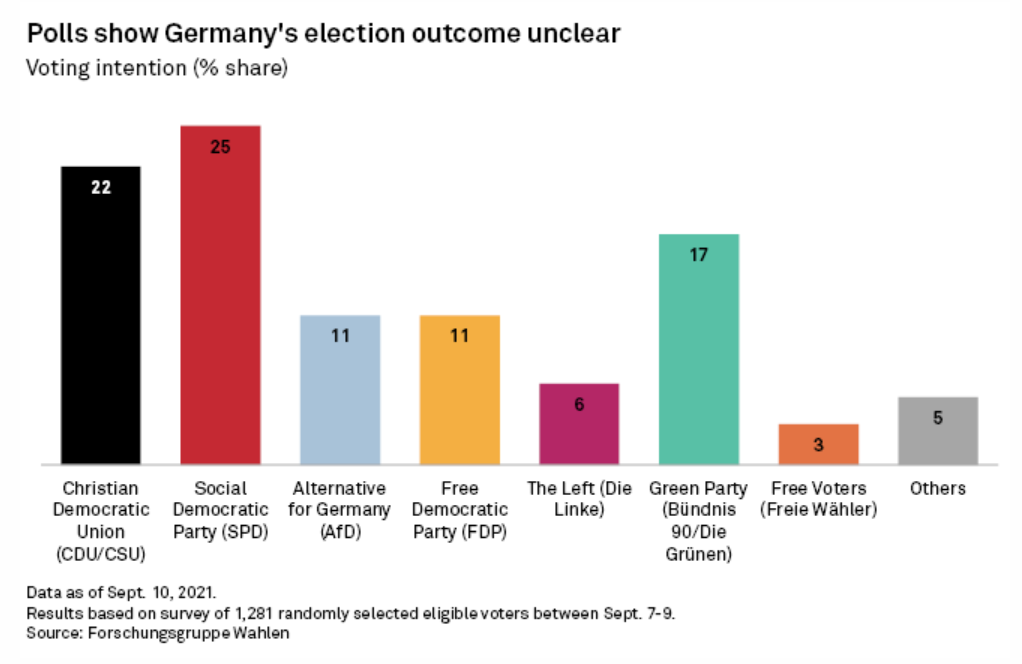 Voters in Germany, Europe's largest economy, go to the polls Sept. 26 for a federal election with climate change and energy policy as key battlegrounds.

Responsibly sourced natural gas is gaining support among shale producers, although it could be some time before a mature market develops for certified gas supply, according to panelists at the LDC Gas Forums' Mid-Continent Forum.

Institutional investors in Asia-Pacific are tracking ahead of their global peers in aligning their strategies with the goal of achieving carbon neutrality by 2050 as environmental, social and governance considerations become increasingly core to businesses.

A military coup in West Africa has underscored the potential benefits of stockpiling critical and strategic metals essential for the energy transition. 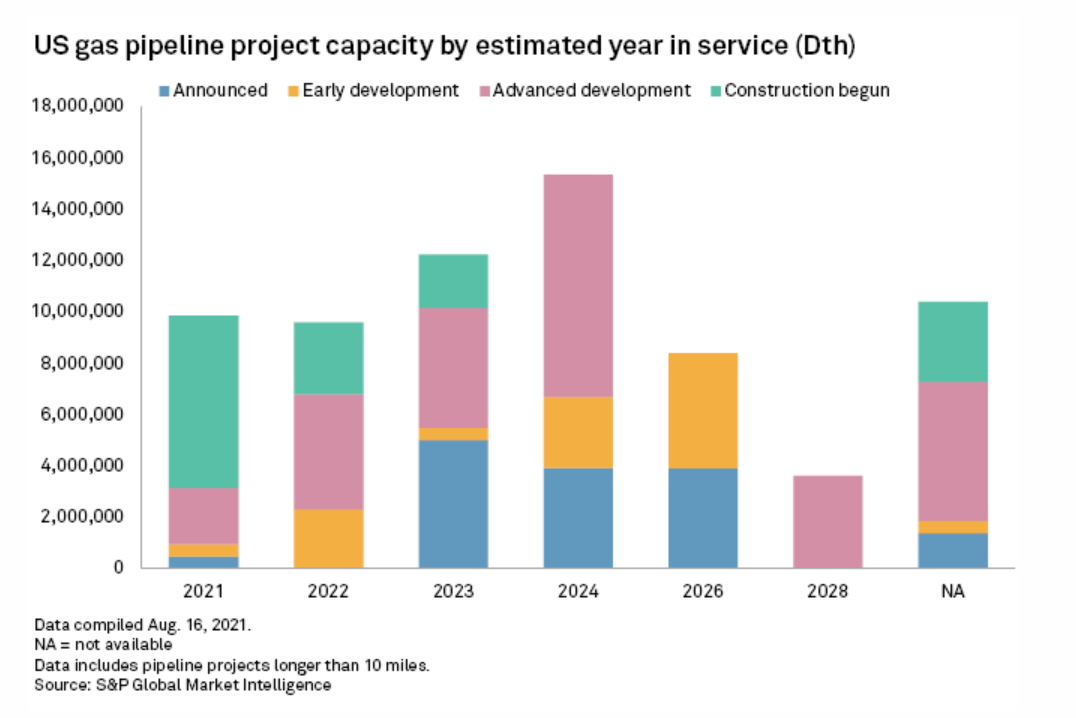 LNG export facilities and their demand for supplies will drive a large portion of U.S. natural gas pipeline construction through 2026, according to an analysis of S&P Global Market Intelligence data. Of the 45 pipeline projects projected to come online over the next five years, at least 16 are tied to liquefaction terminals that are operating or under development on the Gulf Coast, with six export facilities expected to begin commercial service in 2024 alone.

Colonial Pipeline has resumed operations on its Line 1 refined products pipeline, while Line 2 remains down because of power outages caused by Hurricane Nicholas, the company said Sept. 14. Lines 3 and 4 are operating normally, the company said.

The outcome of the California governor recall election is unlikely to have immediate impacts on wholesale power markets or existing laws such as the one concerning state's goal of 100% clean energy by 2045, but the leading opponent would likely change the heads of the state's various utility commissions, industry experts say.