The Essential Podcast, Episode 43: Silicon Valley is Not Normal — What Innovation Looks Like in the Real World

Physical and cyber-related attacks are becoming an unignorable governance risks for energy companies, especially as operating conditions for global markets remain complex under the constraints of the continuing coronavirus crisis and a shifting geopolitical order.

Geopolitical risk is evolving as the global economy races into a post-pandemic world and countries confront tensions within their own borders while aiming to foster international diplomacy—with economic, supply chain, labor unrest, and energy-security issues intensifying. With remote working and rapid digital transformation efforts contributing to a proliferation of cyberattacks affecting consumers and critical infrastructure, cybersecurity is a top concern for government and business as regulation changes the global landscape—given the financial losses, reputational damages, risk management decision-making, and market disruptions that can follow in the wake of attacks.

Security incidents targeted against the energy industry, including physical attacks on oil facilities, pipelines, shipping tankers, and other infrastructure, have tripled on an annualized basis since 2017 and are increasing rapidly this year, according to data compiled in S&P Global Platts’ Oil  Security Sentinel. Attacks, alongside geopolitical disruptions and extreme weather events, have caused the temporary displacement of nearly 4.2 million barrels per day of crude oil production from global markets in the past five years.

Recent security threats in Nigeria, which has endured a long history of attacks on its energy infrastructure, have put the oil industry in Africa's largest oil producer and a key supplier of light sweet crude grades to Europe at risk. Major oil hotspots like Saudi Arabia and Iraq have endured attacks on critical infrastructure from Houthi and Islamic State fighters. Conflict in Colombia’s most oil-rich regions has created challenges to petroleum production and further exacerbated the country’s overall energy crisis. The social unrest that erupted across South Africa in July triggered disruption across supply chains and a suspension of nearly all of the country’s oil production and mining activity. In Yemen, the war and humanitarian crisis, persistent security risks, and political uncertainty haven’t stopped the country’s oil and gas industry, but will need peace to fully recover.

"Putting money in a country like Yemen is far from being an appealing proposition," Carole Nakhle, an energy economist who heads the consultancy Crystol Energy, told S&P Global Platts. "However, for those that have already invested significant sums, it is unlikely that they would simply walk away, hoping that peace will prevail at some point."

In the digital world, the threat of cyberattacks is more common than that of physical attacks. Ahead of recent holidays in the U.S., the White House warned of increased threats of hacks on critical infrastructure—considering that the ransomware attack on Colonial Pipeline preceded Mother's Day weekend, the agricultural sector was hit with a ransomware attack affecting meat production facilities over the Memorial Day weekend, and ransomware actors attacked an information-technology entity during the Independence Day holiday weekend, according to S&P Global Platts. Utilities and other operators have invested in stronger cyberattack prevention and mitigation plans in light of recent breaches.

"Attackers have sometimes focused on security operation centers that may be understaffed or a sense that there are fewer key personnel on duty as they may be on vacation" over holiday weekends, Deputy National Security Advisor for Cyber and Emerging Technologies Anne Neuberger said during a Sept. 2 White House press briefing. "And indeed, a long weekend can sometimes make attackers feel they have extra time to navigate in a network before they are detected."

Today is Friday, September 10, 2021, and here is today’s essential intelligence. 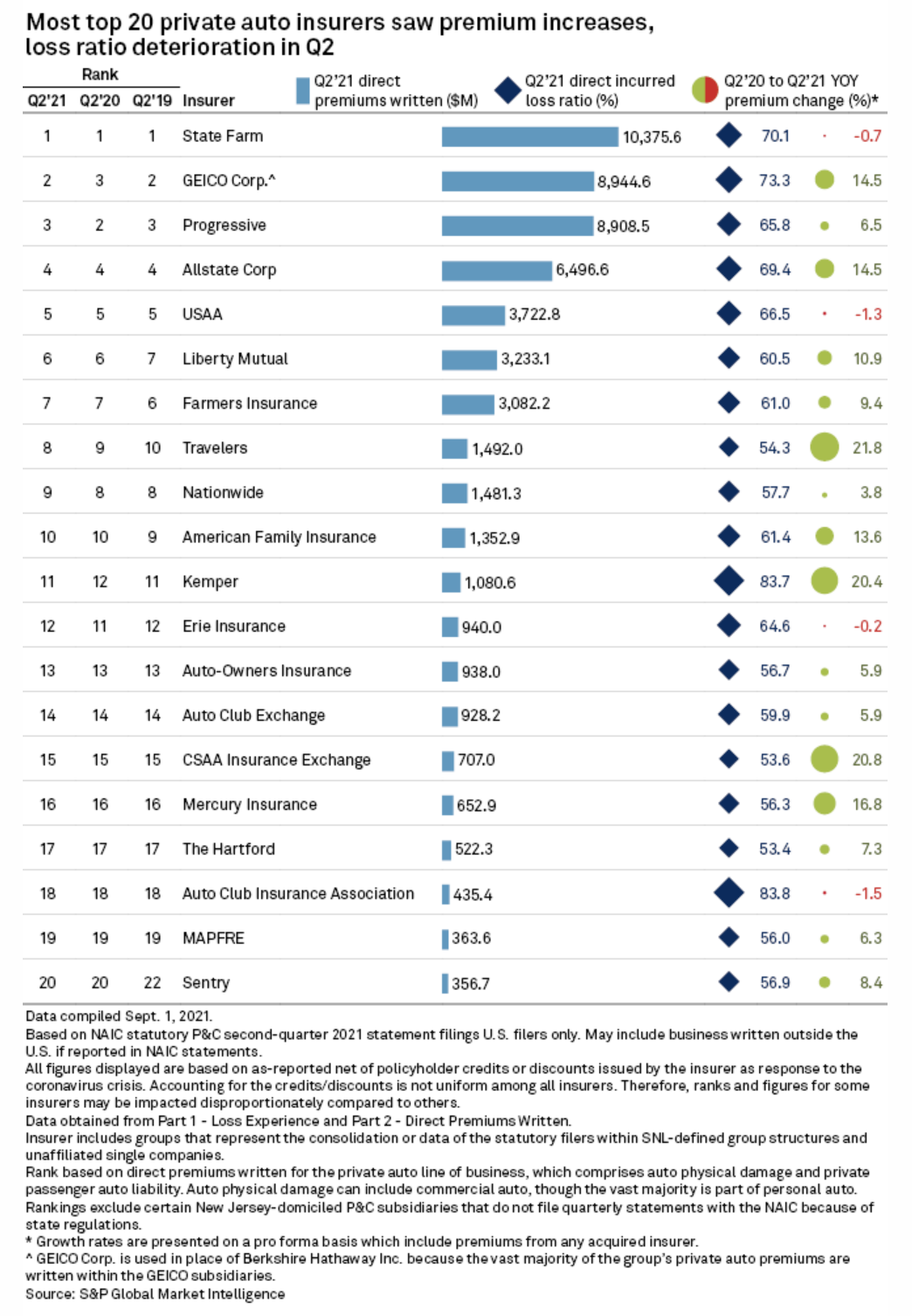 Fourteen of the 20 largest U.S. private auto insurers saw their loss ratios deteriorate by double-digit percentage points year over year in the second quarter, according to an S&P Global Market Intelligence analysis.

Investors are bracing for more idiosyncratic and regulatory events in Asia on growing recognition that COVID and China risks are lasting rather than transitory, according to panelists at a recent S&P Global Ratings webcast. Lower credit ratings, higher debt levels, and higher default rates will push winners and losers to emerge over many years to come. 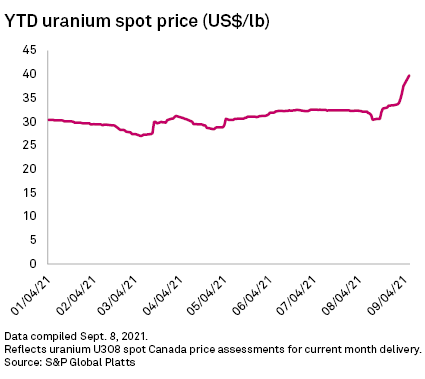 A Canadian investment fund almost singlehandedly launched uranium spot prices into orbit with a buying spree that has put the nuclear power industry on alert. The spot uranium price for deliveries this month leapt 30.8% over 30 days to $39.75/lb as of 1 p.m. on Sept. 7 — a steep rise for a commodity market that previously saw years of sagging prices, according to data from S&P Global Platts.

During a recent three-year period ending July 2021, the S&P Multi-Asset Dynamic Inflation Strategy Index outperformed its component strategies as well as some of the popular “inflation hedge” asset classes, such as broad commodities, real estate, and inflation-protected bonds. 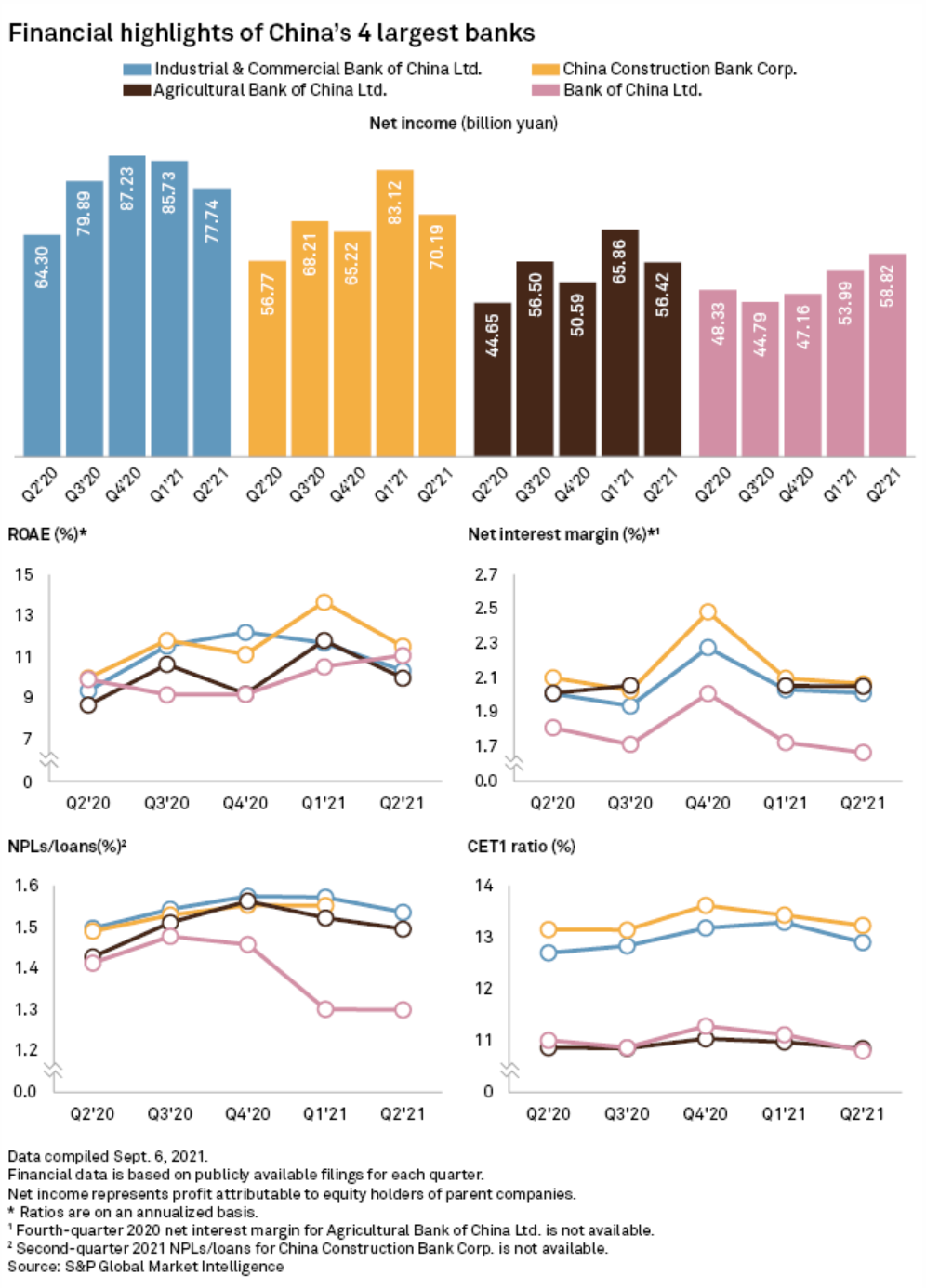 The six largest Chinese commercial banks in terms of assets reported a total net profit of 602.4 billion yuan in the six months ended June 30, marking a 13.06% year-over-year increase, according to data from the China Banking and Insurance Regulatory Commission. However, that is still below the pre-pandemic level of 605.7 billion yuan for the same period in 2019.

Rules For Banks And Nonbanks Must Be Harmonized — Senior European Bankers 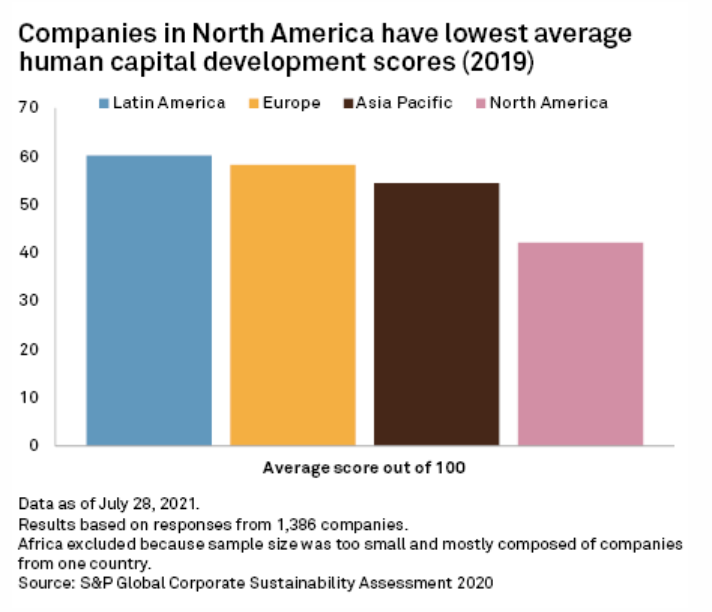 Disclosure regulation in the U.S. must strike a balance between the needs of investors and requiring information companies can reliably provide. Companies and sectors are at widely varying stages of disclosures on climate change. S&P Global’s 2020 Corporate Sustainability Assessment found North American companies collectively had the lowest average human capital development scores compared to other regions, an indication that more work is needed in this area.

The UK government recently shared concerns that some energy suppliers are overstating the environmental credentials of their products as it launched a consultation on green electricity tariffs, which also revealed that green gas retail offerings are on its radar.

At the outset of an emerging hydrogen economy, regions across the U.S. are considering diverse pathways for producing low-carbon hydrogen and scaling demand, data from the U.S. Department of Energy suggest.

European Union steel mills may in the future risk having their operating permits removed if they are unable to restrict their greenhouse gas emissions to certain levels, steel industry representatives warned Sept. 8.

District of Columbia Public Service Commission Chairman Willie Phillips will be nominated to serve as the Federal Energy Regulatory Commission's fifth member, the White House announced Sept. 9. If confirmed by the U.S. Senate, the experienced regulatory attorney will give Democrats a 3-2 majority at the agency as the Biden administration seeks to decarbonize the nation's power supply by 2035 in the face of worsening climate impacts due to global warming. 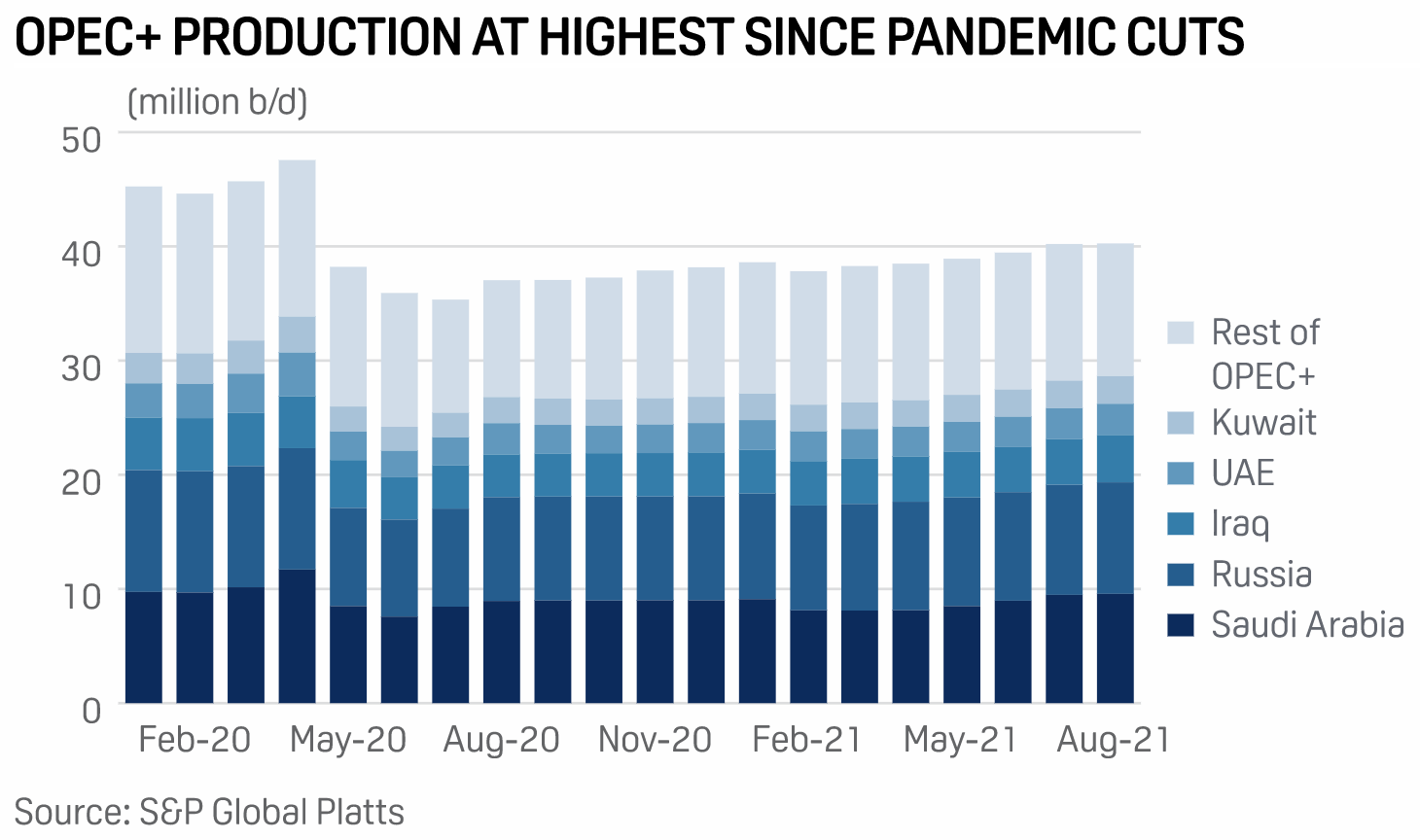 OPEC and its allies nudged up crude production by just 50,000 b/d in August, despite loosening their output quotas, as disruptions and maintenances in a few countries capped the group's gains. OPEC's 13 members pumped 26.97 million b/d in the month, a rise of 140,000 b/d from July, while nine non-OPEC partners led by Russia added 13.29 million b/d, a drop of 90,000 b/d, according to the latest S&P Global Platts survey.

Oil Prices Could Hit $200/B Without New Investments In Upstream Sector: Omani Minister

Global oil prices could soar to $200/b if no new investments are made in the oil and gas sector in the short-term, Oman's energy and minerals minister said Sept. 9, in reply to the International Energy Agency's assessment for reaching net-zero emissions by 2050.

The Suez Canal faced a brief interruption to northbound traffic flows on Sept. 9 after a bulk carrier ran aground in the key waterway, according to shipping sources. The Panama-flagged Coral Crystal faced engine trouble and was grounded at 11:14 am local time (0914 GMT) and refloated at 12:35 pm, shipping agent Leth Agencies said in a statement.