The Essential Podcast, Episode 51: From the Ground Up — Understanding Asian Markets from Dangdut to Dama

Across emerging market (EM) economies, accelerated vaccination rollouts contributed to surprisingly strong first-half activity and paint a more promising picture for full-year GDP growth. But the risks of the delta variant on the recovery, and fiscal and monetary policy tightening too soon or being unable to anchor inflation, loom large over economic and credit conditions.

S&P Global Ratings raised its 2021 growth outlook for EM economies, excluding China and India, to 4.8% from the previous forecast of 4.6% as a result of the economies’ “benefiting from a stronger-than-expected first half, accelerating vaccination rollouts, and lower tolerance for renewed restrictions on economic activity,” according to its fourth-quarter outlook. The upgraded growth expectations for EMs in Europe, the Middle East, and Africa and Latin America—up 0.7% to 4.8% for the former and up 0.5% to 6.2% for the latter—offset S&P Global Ratings’ downgraded growth revision of 0.4 percentage points to 7.6% for EMs in Asia.

“Even as economic activity in the EMs ramps up, downside risks to our growth forecasts from COVID-19 can't be brushed off just yet—in particular, worsening fatalities could reverse some reopening trends,” S&P Global Economics said in its fourth-quarter outlook for EM economies. “Removing stimulus measures is a challenging task when the recovery is still fragile, with elevated levels of unemployment, and growth deceleration could prove sharper than expected … Monetary authorities will have to walk a fine line in anchoring inflation expectations while supporting short-term growth.”

“Improvement in credit conditions across key EMs could be plateauing over the coming months, as pre-existing weaknesses and increasing post-pandemic challenges slow economic recovery and hinder business conditions,” S&P Global Ratings said in its fourth-quarter credit conditions report on EM economies. “On the bright side, many EM economies have returned to their pre-pandemic levels and negative rating bias has decreased. Vaccination has accelerated in most key EMs, while recent virus outbreaks haven't been as harmful to economic activity, given that consumption and investment patterns have been adapting to the pandemic.”

“Except for a few countries (China, Saudi Arabia, and Indonesia), the majority of the countries in EMs are running real interest rates looser than their 10-year averages, by less than 100 basis points at the low end (Thailand and Turkey) to almost 600 basis points (Brazil),” S&P Global Ratings said in its credit conditions report. “To be sure, monetary stance is tighter than it seems, once adjusted for one-off effects and base-effects influencing current inflation.”

Today is Thursday, October 7, 2021, and here is today’s essential intelligence. 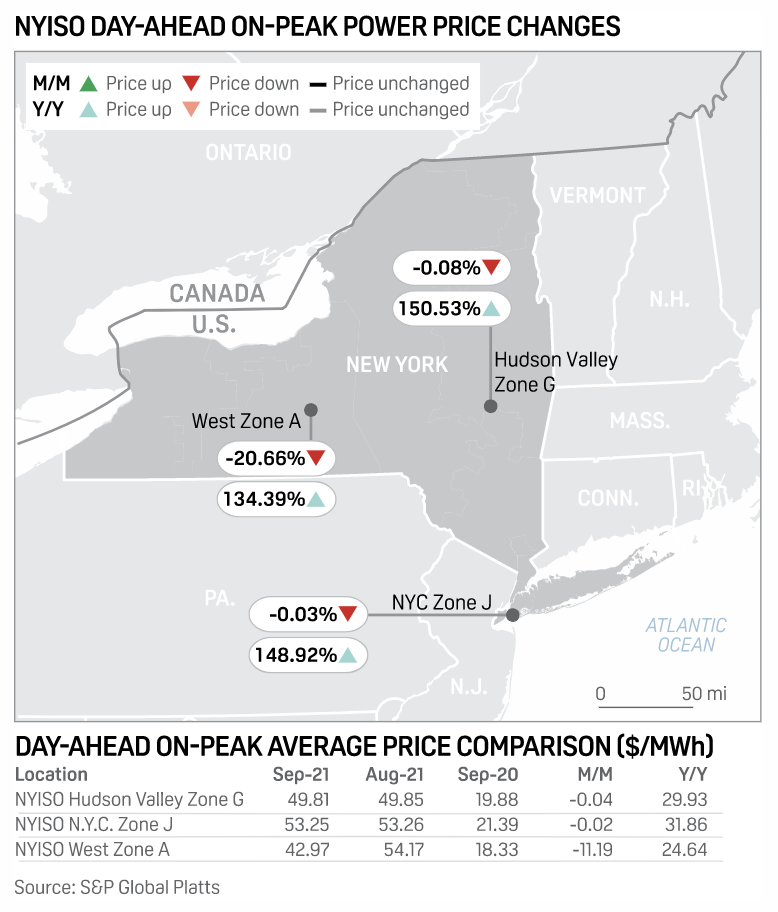 New York Independent System Operator power prices at major hubs mostly decreased on the month in September, with lower temperatures and power demand, while spot and forward natural gas and power prices significantly increased in the month from year-ago levels.

Straining supply lines and under-investment in upstream will likely dog oil markets and support prices, with levels similar to current ones in a year's time, the CEOs of commodity traders Vitol, Gunvor Group, and Trafigura said at an industry event Oct. 4. 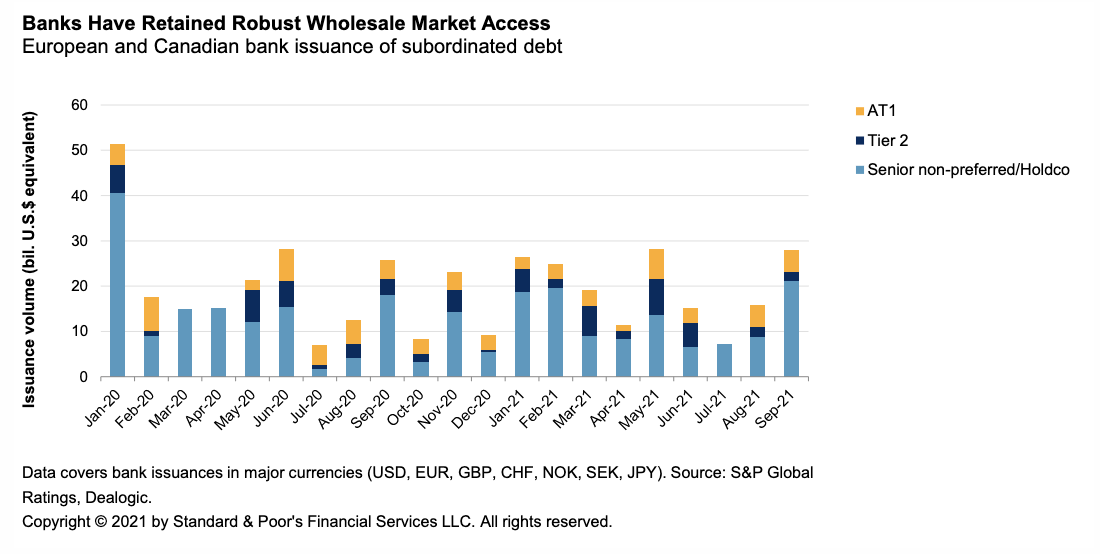 S&P Global Ratings continues to see a clear intent among policymakers to move from bail-out to bail-in resolution, and this continues to inform its base case for European commercial banks. However, Europe still has plenty to do to complete banks' resolvability and make the prospect of resolution more credible.

GCC Banks Hope The Worst Is Over As The Recovery Begins

Money flowing in from mainland China will help drive an expected 6%-10% annual growth in Hong Kong's wealth management assets, currently estimated at $1.45 trillion USD, according to a survey by an industry association.

The Future Of Banking: Central Bank Digital Currencies In Asia-Pacific—Pathways Are Plenty, Destination Is Uncertain

Listen: The Essential Podcast, Episode 46: The Geopolitics of Change — Looking at the Atlas of the Energy Transition 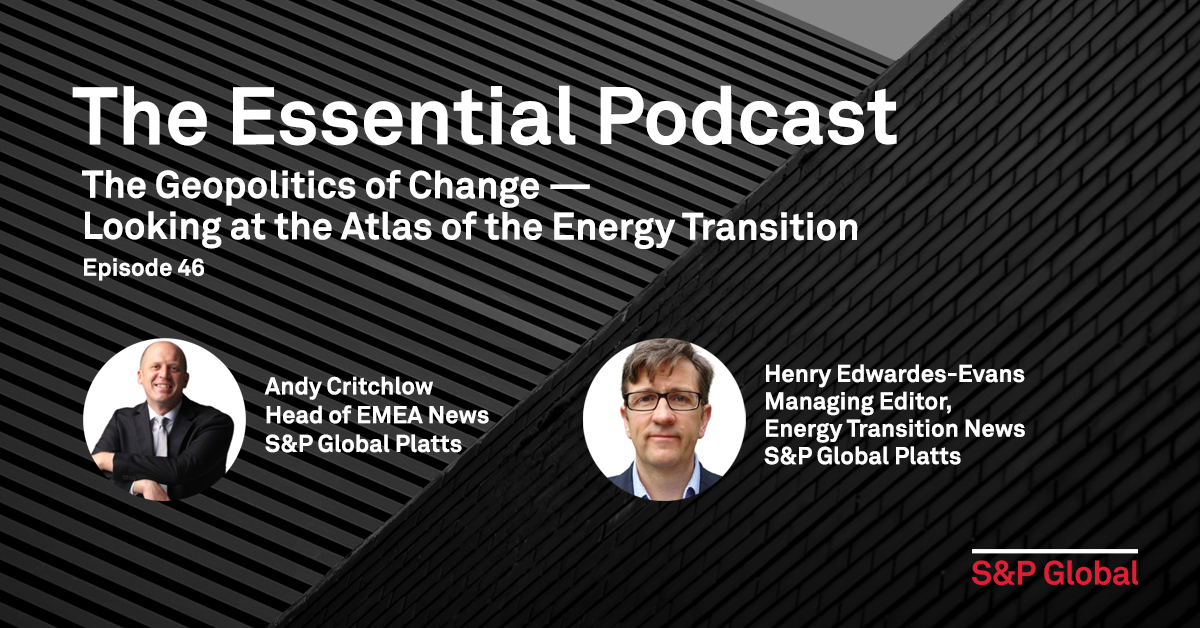 —Listen and subscribe to the Essential Podcast from S&P Global

Green and low-carbon hydrogen guarantees of origin (GOs) are set to play an important role in fulfilling the EU's ambitious climate targets, but the slow start-up of renewable hydrogen production and uptake on the demand side is holding up the implementation of a European-wide certification system.

The low-carbon hydrogen sector grew in 2021 on the back of enterprise and government support and has moved from the technology stage to the implementation stage, but it still needs massive investment to be commercialized at a competitive cost.

True Cost Of 'Incredible' Decarbonization Task Yet To Be Realized: TotalEnergies' Pouyanne

The world has yet to grasp the scale of the task of removing carbon emissions from the energy system, with oil demand likely to be around the 90 million b/d level by the end of this decade, or about 10% below pre-pandemic levels, TotalEnergies CEO Patrick Pouyanne said Oct. 5.

Despite only receiving minimal electricity from backup power generators, Port Fourchon is about 55% up and running and should quickly grow to 75% after power is restored. Then, as the most extensive damages are repaired, the port should return to roughly normal operations by the end of November, about three months after Ida's Louisiana landfall.

Lack of investments and supply disruptions are helping drive LNG and natural gas prices to record highs, but LNG is still expected to play a significant role in the energy transition, delegates at the 10th LNG Producer-Consumer Conference said Oct. 5.

In the latest installment of the S&P Global Platts Commodities Focus podcast, Harry Weber, a Platts senior natural gas writer in Houston, is joined by Dania El Saadi and Claudia Carpenter in Dubai. They discuss the recently completed Gastech, the biggest in-person gathering of gas market participants since the coronavirus pandemic erupted almost two years ago. 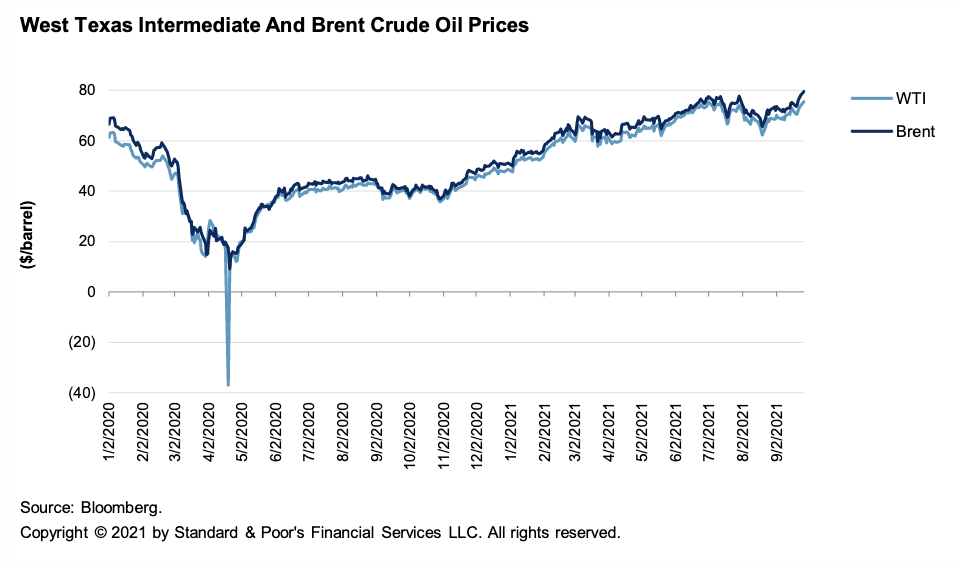 S&P Global Ratings' new long-term natural gas price assumptions are higher than previously published prices largely because of its belief that natural gas has favorable fundamentals as a bridge fuel in the energy transition story.

EU leaders are to discuss the option of setting up a strategic EU gas reserve against the background of high gas prices, European Commission President Ursula von der Leyen said Oct. 5. Von der Leyen said the current high gas prices were a result of a lack of supply response to higher demand and highlighted the EU's gas import dependence.

The Canadian government said Oct. 4 it is requesting diplomatic negotiations with the U.S. to keep Enbridge's Line 5 crude and propane pipelines open in Michigan, arguing that any court-ordered closure would violate a 1977 international treaty regarding transit pipelines.