Big Tech is likely to face regulatory roadblocks regardless of the outcome of the U.S. presidential election.

Alphabet Inc.’s Google LLC was served with an antitrust lawsuit on Oct. 20 by the U.S. Justice Department and the states of Arkansas, Georgia, Florida, Indiana, Kentucky, Louisiana, Mississippi, Missouri, Montana, South Carolina, and Texas, alleging that the technology giant “foreclosed any meaningful search competitor from gaining vital distribution and scale, eliminating competition for a majority of search queries in the United States." Google said in response that "people use Google because they choose to — not because they're forced to or because they can't find alternatives” and described the suit as “deeply flawed.”

“Like countless other businesses, we pay to promote our services, just like a cereal brand might pay a supermarket to stock its products at the end of a row or on a shelf at eye level,” Google Chief Legal Officer Kent Walker said in an Oct. 20 statement.

The leadership behind the lawsuits is largely Republican. Under the Trump Administration, U.S. Attorney General William Barr has been considered proactive in addressing the president’s complaints through the federal government’s judicial branch. In his first term, President Trump has been outspoken about his distrust and dissatisfaction with technology firms in the country and criticized them for what he saw as minimizing conservative viewpoints. The 11 states involved in the Justice Department’s lawsuit all have Republican attorneys general. However, at least seven additional states could sue Google in the coming weeks, according to the Democratic New York Attorney General Letitia James. Experts expect states with Democratic AGs to join and file antitrust lawsuits.

Regardless, with less than two weeks until the presidential election, the likelihood that a changing of the guard will allievate pressure on technology conglomorates is low.

"I do not think a change in administration will demonstrably impact the [DOJ] complaint," Sally Hubbard, director of enforcement strategy at the antitrust-focused research and advocacy organization Open Markets Institute, told S&P Global Market Intelligence. She characterized the lawsuit as an “incredibly strong” case.

Under a Biden Administration, the attorneys general may instead expand the complaint to include areas of anti-competitive conduct in Google’s business beyond the monopolies in general search, search advertising, and general search text advertising markets that the DOJ targeted.

"I'm hopeful that this would lead a Biden Administration to want to push hard on any antitrust case against Google where they find facts indicate a violation," Charlotte Slaiman, competition policy director at the public interest group Public Knowledge, told S&P Global Market Intelligence. "At the same time, the role of Congress and agencies to do more than antitrust enforcement is hugely important, so I'm also hopeful a Biden Administration would make new laws and rules for big tech a priority."

Other experts agree that a Biden win may mean more trouble for Google than what the current administration is bringing about.

Because “there is just so much momentum moving against monopoly power, particularly in tech,” Sarah Miller, executive director of the American Economic Liberties Project, told POLITCO, Biden would be “inheriting a major turning point in the way the public understands how public institutions relate to corporate power.”

George Washington University Law School antitrust professor William Kovacic told Reuters that of the actions on the antitrust suit that a Biden Administration could take if he wins the presidency, “what they will not do is drop this case.”

The Biden campaign refused to comment to reporters on the antitrust lawsuit, but spokesman Bill Russo said in a statement that “growing economic concentration and monopoly power in our nation today threatens our American values of competition, choice, and shared prosperity.” 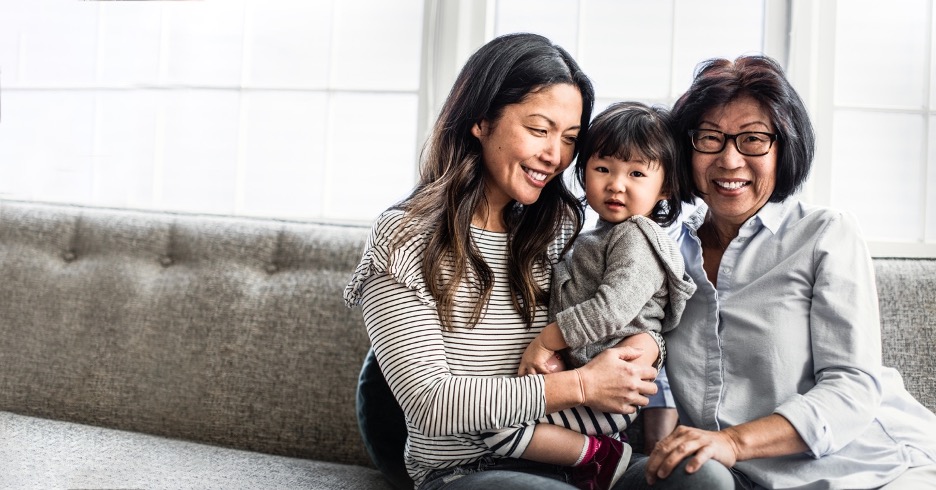 European Rail Operators are on A Slow Train to Recovery 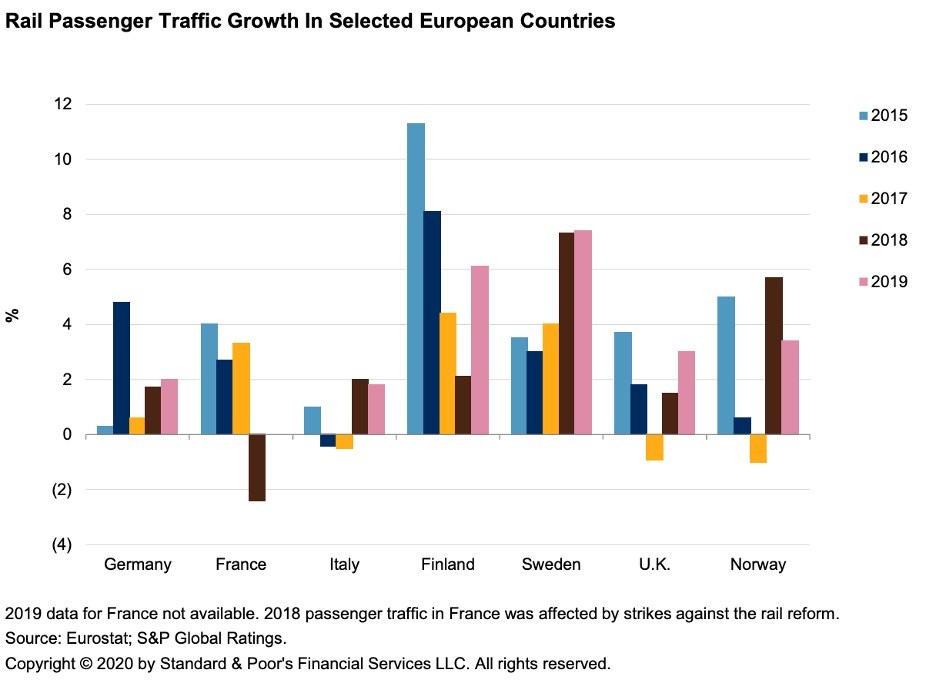 The COVID-19 pandemic is placing a huge strain on European rail travel as passengers continue to avoid usually crowded trains due to health concerns, public health advice, or ongoing travel restrictions. Over the lockdown months between March and May 2020, passenger traffic declined by more than 90% in many European countries, including Italy, France, and the U.K., and has only recovered partly since the travel restrictions were eased. Even after the pandemic, S&P Global Ratings expects work-from-home practices, virtual meetings for business and socializing, and the rise of online shopping to have a lasting impact on all types of rail travel.

Indian Investments in Global Equities: From Zero to Hero 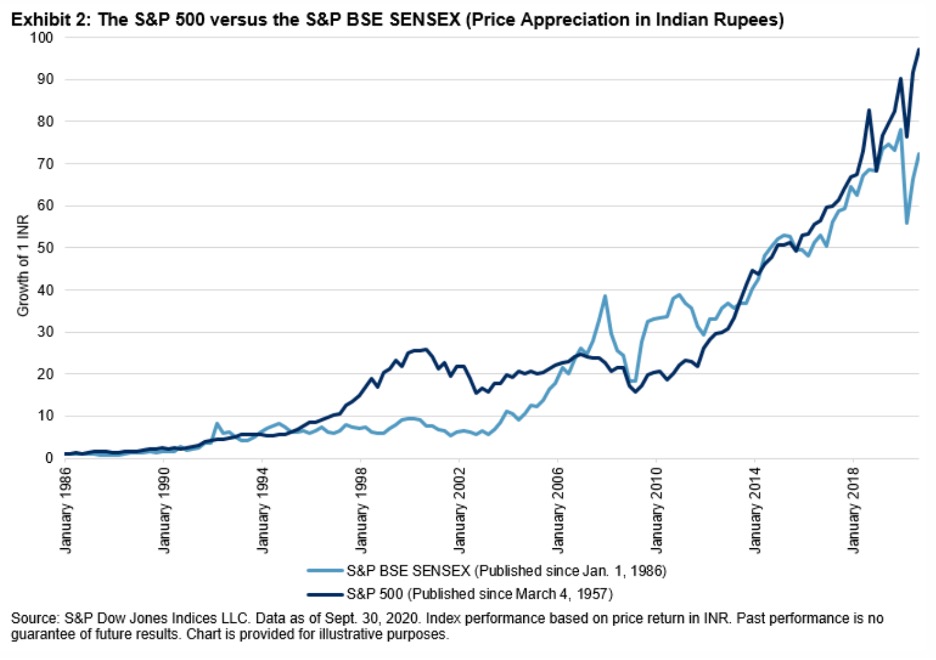 India has been one among many countries that favor a strong home bias in their investment portfolios. There have been many theories put forth on what causes the bias and research has been undertaken to understand it. Whether it is the ease of local information access, regulatory concerns, investor preferences, cost concerns, transactional viability, or cross-border risk aversion, the mystery remains unsolved.

In Q3 2020, Indices saw a continuation of the technology-led global equity market rebound with the S&P 500® up 8.9%, the S&P Europe 350® up 4.3%, and the S&P Pan Asia BMI up 8.9%, while the S&P Developed Ex-U.S. BMI and the S&P Emerging BMI were up 6.3% and 9.0%, respectively. The story was different in Latin America, where the equity market has little exposure to technology-driven companies, though some markets benefited from the boom in mining stocks. 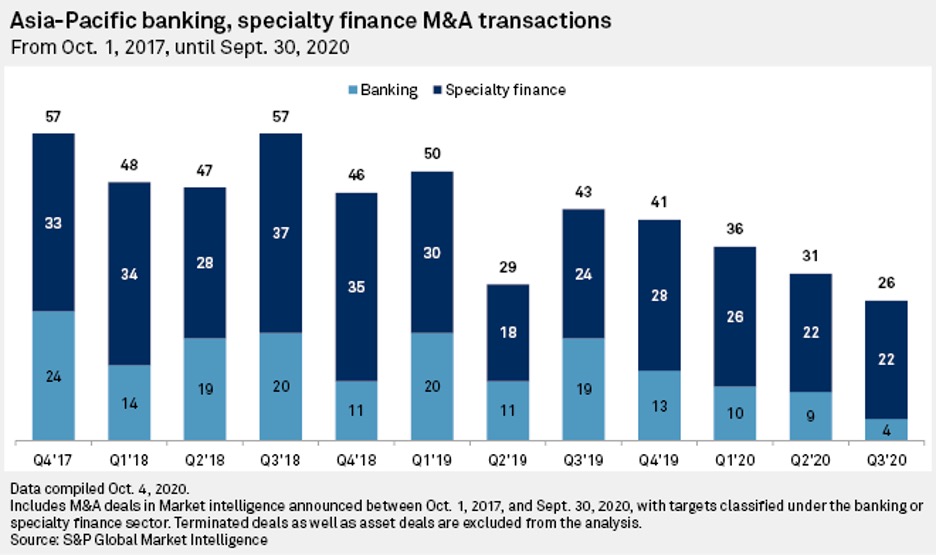 Thinning margins, depleting capital and the need for new growth sources amid the lingering pandemic may lead some Asia-Pacific financial institutions to consider mergers or acquisitions, particularly in China and Southeast Asia, analysts say, after deal activity in the third quarter fell to the lowest level in at least three years. In the three months ended Sept. 30, there were 26 M&A transactions in the banking and specialty finance sectors in Asia-Pacific, the fourth consecutive quarter of decline, according to S&P Global Market Intelligence data. The deal count was also at the lowest since at least the fourth quarter of 2017.

How Brazil's Banks Plan To Save The Amazon

If clients won't go to the branches, then the branches must go to the clients. In 2010, Banco Bradesco SA embarked on an innovative financial inclusion endeavor. It launched a floating bank branch into the Amazon basin so Brazilians in remote areas of the rainforest could open accounts, make deposits or take out loans. A second boat-branch was later added. Brazil's North region, home to more than half of the world's remaining rainforests, is still far from financially developed. But mounting pressure on the public and private sectors around environmental, social and governance issues has prompted banks to adopt a more active and integral approach. 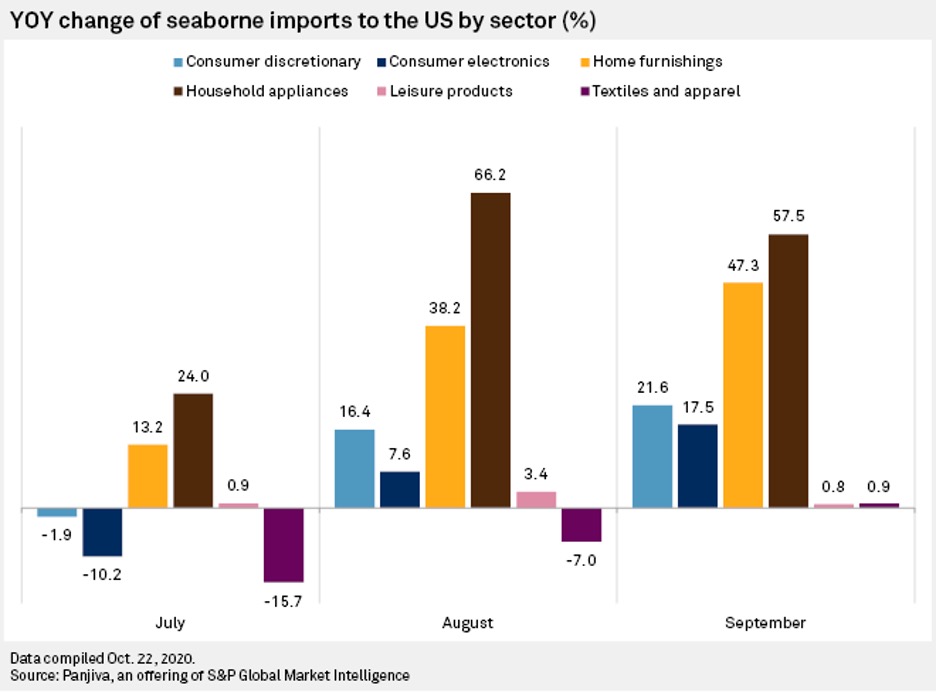 Amazon.com Inc. and other major retailers are stockpiling holiday merchandise earlier than usual, a move experts say will improve the availability of products that consumers are expected to buy during the critical fourth quarter and shield the companies from further supply chain disruptions brought on by the coronavirus crisis. The pandemic has led Amazon, Walmart Inc., Target Corp. and other retailers to import items like consumer electronics, home appliances and athleisure well ahead of schedule as they kick off the holiday season early. Consumer discretionary imports surged 21.6% year-over-year in September, accelerating from 16.4% growth in August, according to Panjiva, a business line of S&P Global Market Intelligence.

Telecommunications networks are getting faster and more powerful. But they are also getting more energy efficient. AT&T Inc. and Verizon Communications Inc. have both set goals for becoming carbon neutral in 15 years, with each company laying out a variety of initiatives aimed at reducing energy consumption and relying more on renewable energy. In announcing these goals, AT&T and Verizon joined a growing number of companies that have made carbon neutrality a priority. All told, seven of the top 10 information technology and telecom firms in the U.S., ranked by market capitalization, have either already achieved carbon neutrality or have set a timeline for it. 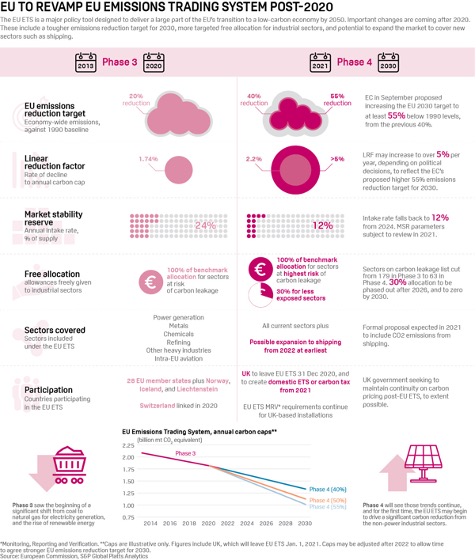 The EU ETS is a major policy tool designed to deliver a large part of the EU's transition to a low-carbon economy by 2050. Important changes are coming after 2020. These include a tougher emissions reduction target for 2030, more targeted free allocation for industrial sectors, and potential to expand the market to cover new sectors such as shipping.

Buzz Grows Around Use of Budget Reconciliation to Advance Energy, Climate Goals

Feature: EU Carbon Market to Move Into Fourth Gear From 2021

Europe's flagship Emissions Trading System is about to shift into a higher gear when a fourth trading phase starts in January. The 16-year old carbon market has begun to play a more significant role in decarbonizing Europe's economy in recent years, helping prompt a shift from emissions-intensive coal to natural gas and renewable sources for electricity generation.

The impact of climate change on our planet remains a major concern for the wellbeing of future generations. Many policymakers around the world continue to push forward with plans to try and achieve a net-zero carbon economy. At the same time, S&P Market intelligence are seeing industry-led initiatives, such as the Task Force on Climate-related Financial Disclosures (TCFD) and the International Capital Market Association’s Green Bond Principles, the latter aiming to stimulate investment in funds and companies with greener credentials.

Many of the nation's coal-fired power plants, often heavy consumers of water resources, are in areas projected to soon face water stress due to climate change. Based on an analysis of data from S&P Global Market Intelligence and the World Resources Institute, power generators in Texas, Indiana, Illinois, Wyoming and Michigan operate about 37.1 GW of coal-fired generation capacity in areas projected to face medium-high to extremely high water stress — when humanity's competition for water exceeds nature's ability to replenish it — due to climate change in 2030. In this week's highlights: How smooth will the return of Libyan oil production be? LME Week gets underway with a difference; and Europe's first interconnector linking two offshore wind farms in the Baltic is to be opened.

Clean energy advocates' hopes for quick reversals of certain policies at the Federal Energy Regulatory Commission that they view as detrimental to the growth of renewable energy are likely out of reach, even if former Vice President Joe Biden wins the presidential election, an attorney with Akin Gump said in an interview Oct. 22. Biden has made ambitious campaign promises to achieve carbon neutrality in the power sector by 2035 and to implement a national energy efficiency and clean electricity standard.