China’s economy swelled 4.9% year-over-year in the third quarter, building on the previous period’s 3.2% growth and marking a return to pre-pandemic activity at a speed that no other G20 country is likely to achieve.

Government data show that China’s GDP grew 0.7% cumulatively in the first nine months of the year.

“By most measures, China's recovery from COVID-19 is a success,” S&P Global Ratings Chief Asia-Pacific Economist Shaun Roache said in a report this week. “Most impressive has been the resilience of China's industrial sector. Supply chains were quick to resume operations, and manufacturing output is now expanding at the fastest pace since early 2019. Fears during the early stages of the pandemic that China could trigger a global supply outage have proven misplaced.”

While industrial production in the world’s second-largest economy grew 6.9% in July- September, retail sales increased just 3.3%. That marked the most growth since the depths of the downturn, but was still off pre-pandemic retail sales increases of 8. The lackluster retail activity raises questions about the underlying strength of China’s recovery from the coronavirus-caused economic downturn.

“Many market observers have suggested that China's consumers are roaring back—photos of overflowing tourist attractions during Golden Week fed that meme,” Mr. Roache said. In reality, “China's retail sales have recovered more slowly than those in Australia and Korea, two economies that have also shown relative success in containing the virus. Indeed, China's tourism ministry reported that Golden Week tourist revenues were down 30% from 2019 despite the holiday lasting one day longer this year.”

Despite the resilience of broader economy, low levels of gasoline and gasoil exports have kept China’s refining margins in negative territory, according to an S&P Global Platts analysis. Diminished global jet-fuel demand and an oversupply of gasoil within the country has stymied trade and activity.

China's oil demand will likely continue its downward trend in the fourth quarter, according to S&P Global Platts Analytics.

S&P Global Ratings anticipates China’s GDP will expand 6.9% this year. The forecast is lower than the International Monetary Fund’s outlook for 8.2% growth, due to an expectation that the country will return to smaller deficits rather than increase its fiscal policy next year.

Today is Wednesday, October 21, 2020, and here is today’s essential intelligence.

Reassessing The Pace Of Recovery For U.S. Media 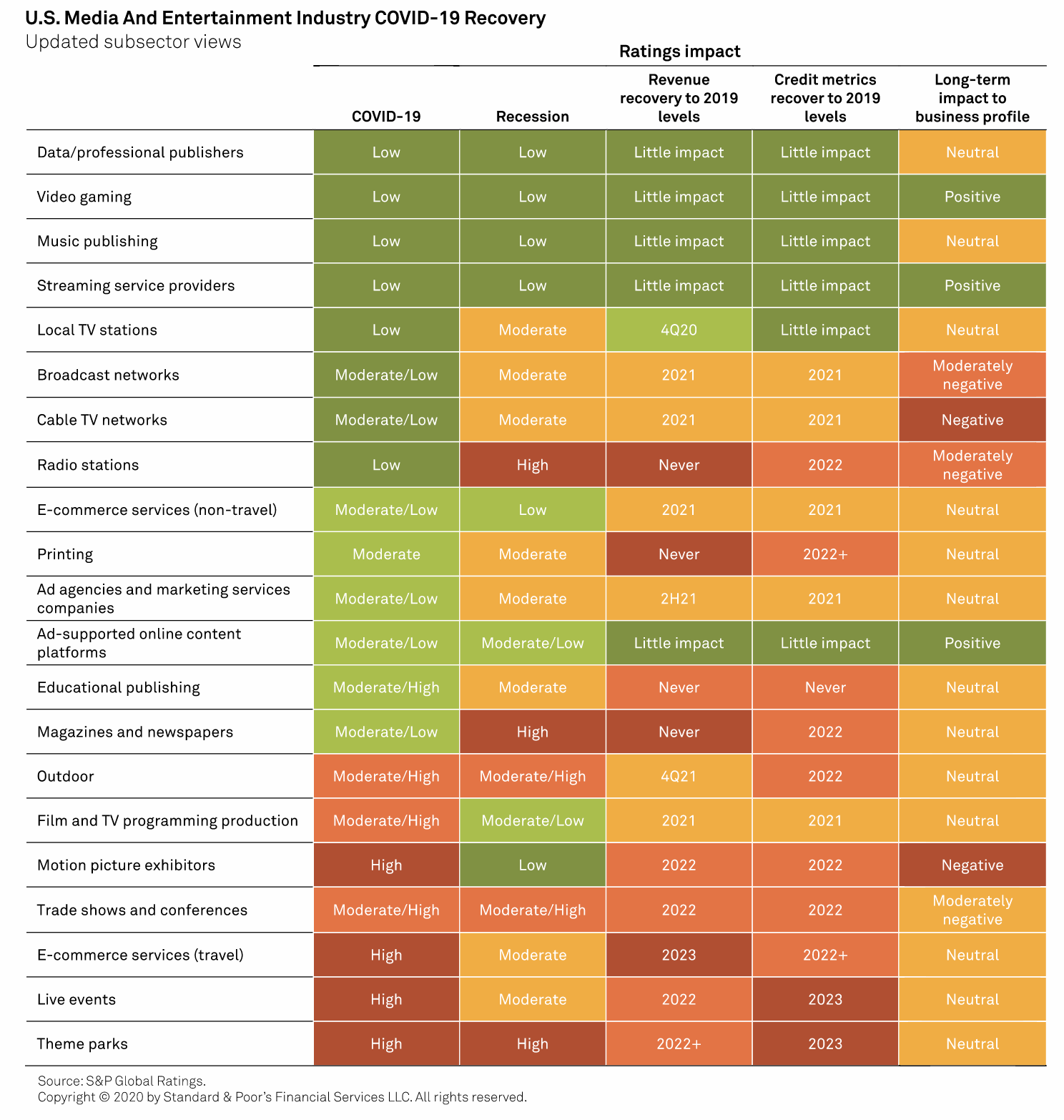 Just over six months ago, as the first COVID-19 cases hit the U.S., S&P Global Ratings began to speculate on the extent of the economic downturn and the impact on the media and entertainment industry. Today, the U.S. remains mired in the pandemic, with no real clear line of sight back to normal.

U.S. Corporate Bankruptcies Continue To Mount Amid Coronavirus, But At Slower Pace

U.S. corporate bankruptcies continue to pile up amid the coronavirus pandemic but at a rate that continues to slow down from earlier in the crisis. Twenty companies joined the list of bankruptcies in the last two weeks, according to an S&P Global Market Intelligence analysis. This is slightly below the number of filings in comparable periods since August when Market Intelligence began tracking the bankruptcies. In previous two-week periods, bankruptcies numbered as high as 31 or 25. In the prior edition of this tracker, published Oct. 5, 22 bankruptcies occurred over two weeks.

The pandemic has brought social aspects of the food processing industry further into the spotlight. S&P Global Ratings believes such factors, notably the health and safety of employees, will lead to more rigorous global industry standards over the next few years. In particular, S&P Global Ratings sees the main push for change coming from government agencies and regulators seeking to reduce risks to the population from contagious diseases. Also, consumers are scrutinizing the source and quality of what they eat and drink more closely, especially because many are cooking at home due to COVID-19-related restrictions. Companies slow to meet stakeholders' demands for better production and quality standards could fall behind competitors. 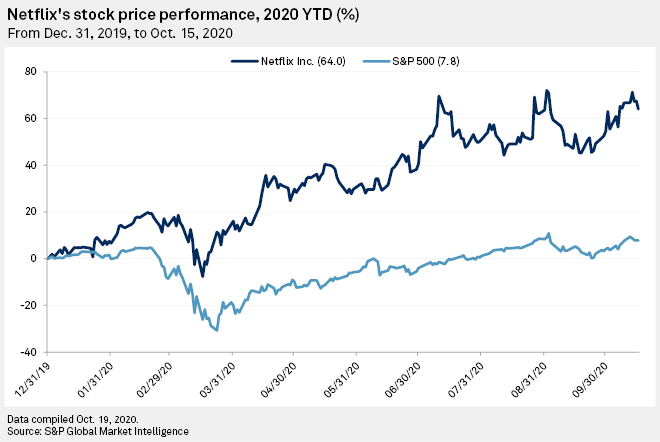 Despite navigating a streaming market riddled with pitfalls, Netflix Inc. remains on sure footing ahead of its third-quarter earnings release on Oct. 20, according to analysts. Unlike many names in the media and entertainment industry, Netflix has benefited greatly during pandemic-roiled 2020, and the month leading up to the earnings release was no exception. Netflix added almost 13% to its market capitalization, while other competing companies like The Walt Disney Co., Comcast Corp. and ViacomCBS Inc. lost ground.

The U.S. Justice Department filed an antitrust lawsuit against Alphabet Inc.'s Google LLC on Oct. 20 alleging the company unlawfully maintained monopolies in the general search, search advertising, and general search text advertising markets through "anticompetitive and exclusionary practices.” The lawsuit, which was filed in the U.S. District Court for the District of Columbia, accuses Google of paying "billions of dollars each year" to device makers such as Apple Inc., LG Electronics Inc. and Samsung Electronics Co. Ltd., as well as to major U.S. wireless carriers including AT&T Inc., T-Mobile U.S. Inc. and Verizon Communications Inc., to secure default status for its general search engine. Some of these agreements are exclusionary, according to the suit, and specifically prohibit these companies from dealing with Google's competitors.

On the latest episode of Fixed Income in 15, S&P Ratings host Joe Cass is joined by S&P Global’s President & CEO Doug Peterson and the Co-Founder of The Carlyle Group David Rubenstein. Doug and David discussed markets, diversity and the impact of ESG. In a wide ranging conversation, there was also time for Doug and David to ponder over the future of healthcare, debate the future of eSports and discuss how leading through this crisis has changed their outlook on work and life.

In California, greenhouse gas emissions produced by this year’s record-breaking wildfire season have climbed past the industrial, power and residential emissions categories and could even overtake transportation as the top polluter, according to estimates by S&P Global Platts Analytics. The scale and devastation of the California wildfires have also added urgency to the state government’s climate priorities, with the latest measure targeting that top emitter, cars.

Hydrogen can transform the UK heating sector and make a contribution to clean transport as part of the country's 2050 decarbonization strategy, lawmaker Alexander Stafford from the governing Conservative party said in a webinar Oct. 20. The UK government is expected to unveil a hydrogen strategy in early 2021, which is likely to form a core part of its goal to build a net-zero emissions economy by 2050, he said. Market observers will be closely watching the outlook for demand and growth spending heading into 2021 as North American operators of natural gas pipelines, processing facilities and liquefaction terminals release third-quarter financial results. Rising coronavirus infection rates in the U.S. have added uncertainty over the depth and resilience of a rebound in volumes. And while prices in Europe and Asia have recently been incentivizing a pickup in activity at LNG terminals, how that picture looks after the peak winter heating season remains in flux.

Seaborne iron ore prices surged in the July-September quarter on the back of strong Chinese crude steel production and tight supply of iron ore fines. However, the market eased from early September due to weaker finished steel prices, squeezing steel margins and indicating the price range could be lower in the fourth quarter. S&P Global Platts' Iron Ore & Steel Outlook found that 54% of market participants expected benchmark prices to range between $100/mt and $110/mt CFR China in Q4.

U.S. wheat futures are continuing to gain support after hitting a near six-year high Oct. 19, with analysts expecting prices to remain firm in the near term amid market jitters around uncertain weather prospects in key growing regions and buyers adopting stockpiling measures. The most active wheat contract traded on the Chicago Board of Trade hit $6.36/bu in the day session Oct. 19, up 10.2% from the month before and 31.4% above the year-to-date low touched June 26.

Pioneer Natural Resources To Acquire Parsley Energy For $4.5B As Permian Consolidates

Leading Midland Basin producer Pioneer Natural Resources said it will acquire Parsley Energy for about $4.5 billion in a deal linked through the Sheffield family as the Permian Basin continues to consolidate. Pioneer CEO Scott Sheffield announced the deal late on Oct. 20 that will merge his company with the Austin-based producer founded and chaired by his son, Bryan Sheffield. The deal would strengthen Pioneer as the top Midland Basin player while also diversifying with more acreage in the Permian's Delaware Basin, potentially making Pioneer the top overall producer in the Permian and definitely the biggest independent, Permian pure play.

Pioneer Natural Resources Co. and Parsley Energy Inc. have become the latest Permian Basin independent producers to announce a merger, but analysts are mixed on how shareholders will receive the all-stock deal, which is valued at $7.6 billion including Parsley debt. With Parsley Chairman Bryan Sheffield being the son of Pioneer CEO Scott Sheffield, the merger is more than just a family reunion. "The [Pioneer-Parsley] combination would create a Permian Basin giant with nearly 930,000 net acres, including 820,000 in the [unconventional] Midland Basin," Stifel said in an Oct. 20 commentary.