While the U.S. economy looks likely to continue its transformation from fossil fuels to renewable energy sources regardless of who wins the Nov. 3 presidential election, the upcoming contest hints at a crossroads with high stakes for the country’s energy transition.

"All but four states have either a state-level or a major-city-level commitment to net zero [carbon emissions], so you know, the political groundwork for having this go to a national commitment, it's there,” Ernest Moniz, the former U.S. Energy secretary in the Obama Administration, who now advocates for a bipartisan approach to climate change in his current role at the Energy Future Initiative, told S&P Global Market Intelligence’s Energy Evolution podcast. “And that's ... where the outcome of the election now or the election in four years or eight years later is going to have tremendous implications.”

"The reason climate legislation is hard—even if you limit it to the power sector—is because different parts of the country are positioned differently, and that can have an impact on the vote count," Christine Tezak, a managing director at the research firm ClearView Energy Partners, told S&P Global Platts, highlighting the importance of elections for the energy transition.

A continued deregulation agenda and de-emphasis on renewable energy would likely remain pillars of President Trump’s agenda if he wins another term, during which he would also be likely to veto any aggressive climate plans proposed by Democratic lawmakers. To be sure, there is the possibility that Republicans could use an infrastructure package to drive the energy transition or support innovative means of reducing emissions without appealing to or acknowledging climate risk.

In a Biden Administration, the actualization of the Democratic nominee’s $2 trillion clean-energy plan would see tax cuts for wind and solar projects and an influx of federal support for clean energy jobs and infrastructure.

Still, Democrats may find it difficult to advance a strong climate strategy if stonewalled by a majority-Republican Senate.

The political uncertainty has prompted U.S. energy companies to re-evaluate their risk and recognize that their strategies must put consumers at the center. Renewables have enjoyed tremendous growth in the past years under the Trump Administration, driven largely by municipal and state utilities.

Today is Tuesday, October 20, 2020, and here is today’s essential intelligence.

Economic Research: U.S. Election: Promises, Policy, And The Potential Effects On The Economy And Corporate Credit 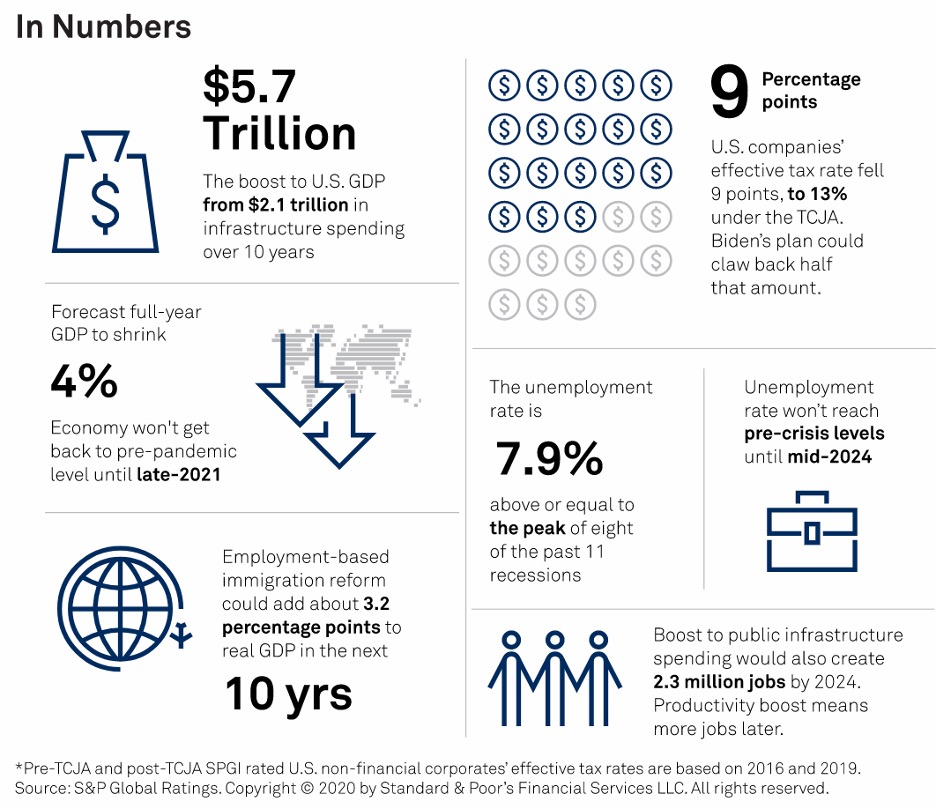 As the historically unusual election season in the U.S. nears its Nov. 3 climax—with the race thrown even further into uncharted waters with President Donald Trump's contraction of COVID-19—S&P Global Ratings has analyzed the platform of the president's Republican party and that of presidential nominee Joe Biden and the Democratic party. With 35 of 100 Senate seats (23 Republican, 12 Democratic) and all 435 seats in the House of Representatives at stake, S&P Global Ratings remains impartial to the politics and rhetoric of the race. Instead, S&P Global Ratings focuses on the stated policies of the two camps, as well as what, if implemented, they would mean for the broader economy and for the credit quality of borrowers, including nonfinancial corporates, banks, and states and municipalities.

This recovery has been about goods consumption versus service consumption. Five months into the recovery, spending on goods is now well above the pre-pandemic February level. However, spending in the larger service sector remains below pre-pandemic levels, as people-facing sectors continue to face varied degrees of capacity restrictions and consumer fear. The strong rebound in demand for goods was punctuated by today's retail sales report. Retail sales (price unadjusted) were up well above S&P Global Ratings’ expectation in September with a 1.9% month-over-month increase (now 5.4% year-over-year). Excluding autos, sales were up 1.5% on the month.

COVID-19 has transformed the retail sector, with an accelerated transition to e-commerce and "omnichannel" platforms becoming increasingly indispensable to support the bricks and mortar stores. Retail sales have picked up pace in the third quarter, with online sales rising sharply. Higher logistics and transportation costs will dilute profitability, with retailers incentivizing click and collect to encourage footfall. 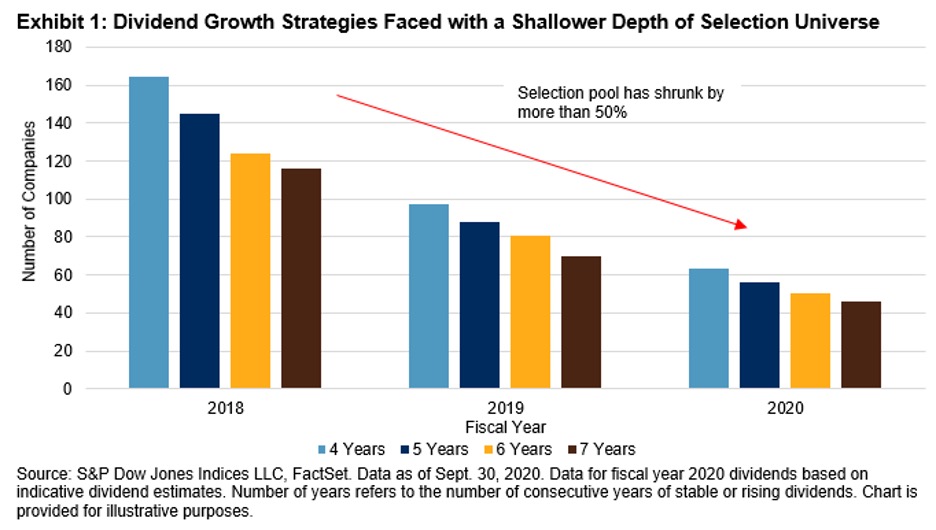 The U.K. has been one of the worst-hit countries in developed markets in terms of dividend cuts in 2020. One in two dividend-paying companies in the S&P United Kingdom BMI have cut dividends, while half of the remaining companies are also expected to cut dividends. A tough year indeed for equity income managers, as opportunity to differentiate abates in the near term. This blog explores why this may be so and draws attention to the benefits of indexing under the current environment.

Global Islamic Indices Continue To Outperform, Gaining Up To 13% Over Conventional Benchmarks YTD

Global equities withstood a slump in the last month of the quarter, ultimately gaining 8.1% in Q3 2020 and entering positive territory YTD, as measured by the S&P Global BMI. Meanwhile, Shariah-compliant benchmarks, including the S&P Global BMI Shariah and Dow Jones Islamic Market (DJIM) World Index, significantly outperformed conventional indices, ultimately gaining an advantage of 13.3% and 14.4% YTD, respectively. The outperformance trend played out across all major regions, with the DJIM World Emerging Markets Index leading the pack, providing an additional 21.3% return above the conventional benchmark. 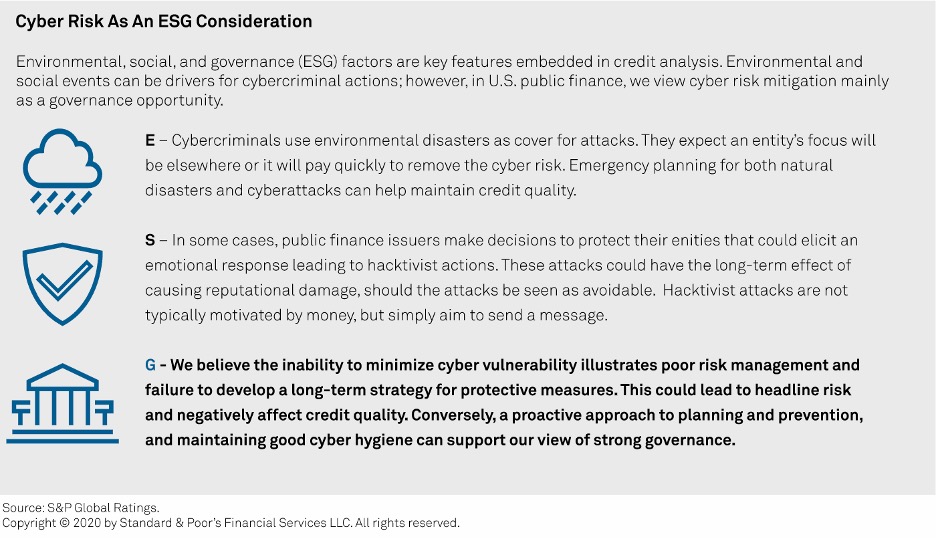 The increasing sophistication of cybercriminals continues to make cybersecurity a greater focus of risk mitigation in public finance. Along with all the other exogenous risks facing rated entities in 2020, cyberattacks continue to grab headlines, as seen recently with attacks on the state of Minnesota; the city of Hartford, Conn.; numerous Texas school districts; and health care and higher education institutions on the front lines of the pandemic. Even as issuers become better prepared and more nimble, the threat from cyberattacks is increasing. 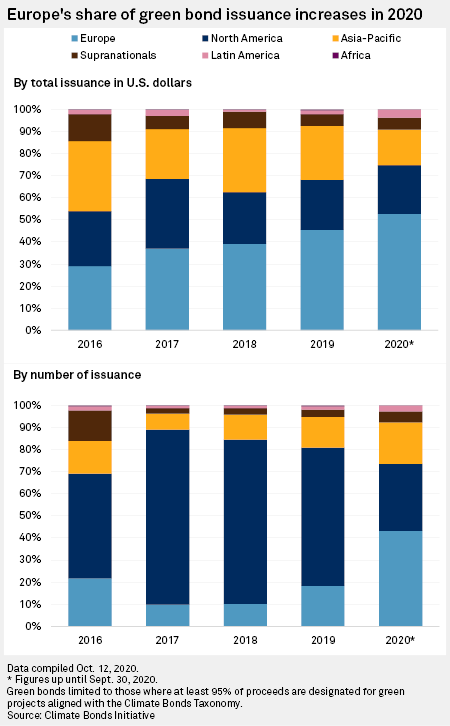 Demand for green bonds in Europe is being driven by the EU's ambitious climate goals, as well as new issuers such as the German government and corporations like carmaker Daimler AG, cementing the region's leadership role in the market. The outbreak of coronavirus dented global demand for green bonds — debt that finances environmentally friendly projects such as wind farms or solar power — as markets dried up in March and issuers switched their priorities to health, but issuance is showing signs of making a comeback, particularly in Europe.

Front of mind to the California Independent System Operator is resource adequacy, as it also works to adapt the market to the energy transition taking place globally, while continuing regional collaboration across the West, outgoing President and CEO Steven Berberich said. Berberich ended his 14-year tenure at the ISO with a summer that saw widespread wildfires, record high temperatures across the West, record power prices in California and Arizona and ISO-ordered rotating outages Aug. 14 and Aug. 15. In this week's highlights: How smooth will the return of Libyan oil production be? LME Week gets underway with a difference; and Europe's first interconnector linking two offshore wind farms in the Baltic is to be opened.

Biden Win Could Be Net Positive For Metals And Mining, Observers Say

Democratic presidential nominee Joe Biden may be against the further proliferation of fossil fuels, but observers have said a different part of the natural resource economy could get a lift if he bests President Donald Trump in the U.S. election in November: the metals and mining sector. Trump ran for president in 2016 on a populist economic message that promised the return of a diminished U.S. industrial workforce, including the mining sector. While his government slashed environmental rules in the name of saving U.S.

Ministers on a key OPEC+ monitoring committee acknowledged a slowdown in the oil market's recovery and vowed to be proactive in preventing a slide in prices, with the scheduled tapering of the coalition's output cuts looming at year-end. With six weeks to go before the full 23-member OPEC+ alliance meets to consider its 2021 production plans, the Joint Ministerial Monitoring Committee said Oct. 19 it was closely following market trends and would not hesitate to call for further supply restraint if needed.

Oil Exporters To Be Hurt Most In Middle East By Coronavirus: IMF

Major oil exporters will suffer the sharpest economic contractions this year out of nations in the Middle East and Central Asia region as they are hit by the double whammy of lower oil prices and reduced demand, the IMF said Oct. 19. Real GDP for oil exporters including Saudi Arabia and Iran will shrink 6.6% this year, the International Monetary Fund said in its regional outlook. That compares with a 6% contraction for Gulf Cooperation Council members.

ConocoPhillips said Oct. 19 it would pay $9.7 billion for Concho Resources, cementing the largest US oil deal since the coronavirus pandemic took hold,increasing its Permian holdings and creating a top US independent E&P player. The deal gives Permian-operator Concho a greater geographic reach. Globally, the combined companies will have 23 billion barrels with an average cost of supply under $30/b and production of 1.502 million b/d of oil equivalent.