Companies and investors attempting to align with environmental, social, and governance (ESG) criteria may not be engaging with all three factors equally. Some renewable energy industries appear to have their own social issues.

European and U.S. clean energy companies have confronted diversity issues and gender imbalances, according to S&P Global Market Intelligence. Without rectifying these inequities, both economies’ energy transitions could be held back by labor crunches.

In Europe, which has set aggressive targets for expansion in offshore wind capacity, solar fleets, and hydrogen production, "we're talking about large investments [in renewable energy capacity] ... and, of course, all of this needs to be done by people … Here, we will see scarcity," Kerstin Ahlfont, chief financial officer of the Swedish energy company Vattenfall, S&P Global Market Intelligence in an interview. "If we are to reach these [capacity] targets, we cannot exclude parts of the potential workforce, be it women or be it any ethnic background. We need to search everywhere for these resources, and we as a company need to make sure we are attractive for all different types of diversity aspects.”

In the U.S., "clean energy has a diversity problem. Despite its broad range of businesses, including construction, utilities, manufacturing, professional services, and repair and maintenance, the clean energy sector is dominated by white men," advocacy groups E2, Alliance to Save Energy, American Association of Blacks in Energy, Energy Efficiency for All, and Black Owners of Solar Services said in recent research. "Given the incredible job growth of the energy sector over the past decade, this lack of diversity threatens to cause women and Black workers to miss out on one of America's great economic expansions."

Worldwide, women represent 21% of the wind energy workforce, 32% of renewables overall, and 22% in traditional energy industries like oil and gas, according to International Renewable Energy Agency data. In the U.S., women hold just 27% of clean energy jobs and account for 25% of the total energy sector workforce, and Black professionals in the U.S. account for 10% of energy jobs and 8% of renewable energy jobs despite making up 13% of the country’s population, according to the advocacy group’s research.

Millions of workers will be needed across Europe and the U.S. to build clean energy infrastructure and systems. Both European and U.S. policymakers have proposed aggressive climate action that, if achieved, will transform their respective economies. But the lack of representation of women and Black professionals in engineering fields, corporate boardrooms, and the broader energy sector spotlights the renewable space’s diversity problems and impending skill shortages.

"When you talk about recruitment and bringing candidates in who may not look like the team they are joining ... that can be a really uncomfortable experience," Abby Watson, head of government affairs for North America at wind-turbine maker Siemens Gamesa Renewable Energy, said during a recent webinar hosted by the renewable industry website Recharge, according to S&P Global Market Intelligence. "That onboarding experience ... is one of the most difficult things to get right consistently."

“High-performing teams tend to require fully engaged employees. How can you actually shape a high performing organization without that engagement? I believe in the world in which we operate, a rapidly transforming world, the best companies are going to be those that are able to fully activate their talent and extract the best from them,” Lanaya Irvin, CEO of the diversity, equity, and inclusion think tank Coqual, told S&P Global’s Essential Podcast about the conditions for Black professionals in Corporate America. “So, when you have Black talent and other cohorts from underrepresented groups [that are] disengaged, disenchanted in corporate workspaces, there's little hope for fostering that sense of belonging or unlocking what we like to call that ‘group genius’ that drives innovation and leads companies to outperformance.”

Today is Wednesday, October 13, 2021, and here is today’s essential intelligence. 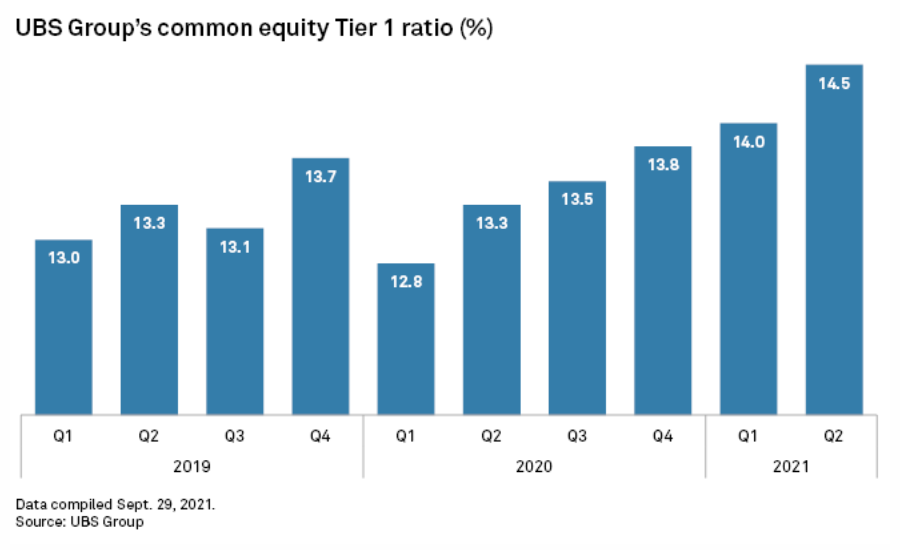 UBS Group AG is appealing a €4.5 billion fine imposed on it in 2019 by a French trial court that found it guilty of aiding and abetting tax fraud, saying the verdict lacked a credible methodology for calculating the fine.

Erste Group Bank AG and Raiffeisen Bank International AG stand to receive a boost from the recent interest rate hike in the Czech Republic, a key foreign market for Austria's two largest banking groups, analysts said. The Czech central bank on Sept. 30 upped its two-week repo rate by 75 basis points — the biggest increase in nearly a quarter of a century — to 1.50%. 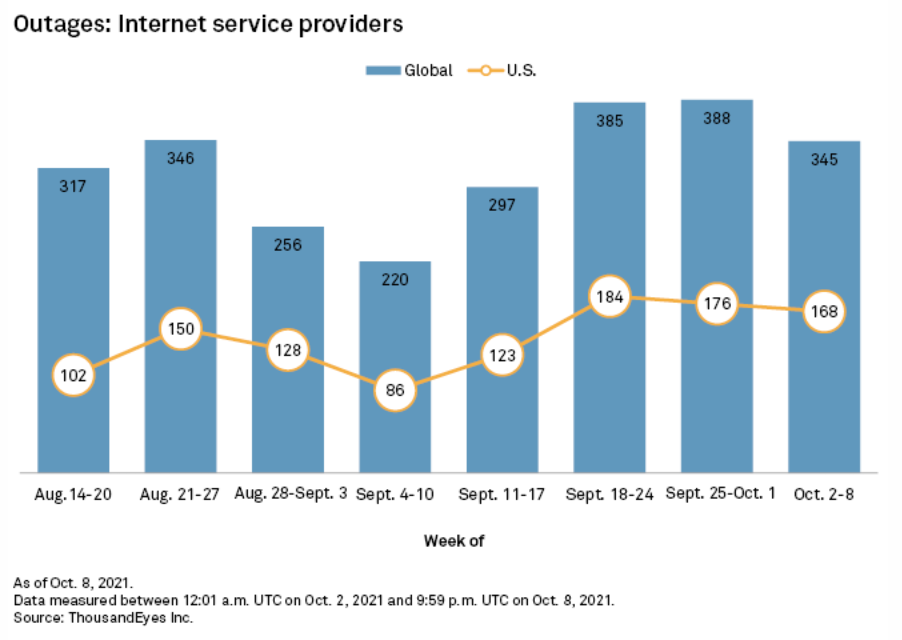 The volume of global internet outages in the first week of October decreased 11% to 345, including a disruption to Facebook Inc.'s backbone network that caused a long outage to its social networking platforms on Oct. 4, according to data from ThousandEyes, a network-monitoring service owned by Cisco Systems Inc.

Venture capital funds have poured money into U.K. software companies this year, spurred by the pandemic upending working habits and institutional investors' greater willingness to put money into the sector. Funds have invested at least £313.3 million into U.K. software developers in 2021, versus £273.3 million for the whole of 2020, according to S&P Global Market Intelligence data.

After a sudden and drop in demand in the government's ongoing auction of mid-band spectrum, analysts are now theorizing that a large bidder chose to drop out, potentially putting the success of the entire auction at risk.

Listen: At the heart of COP26: The role of carbon markets

The landmark Paris Agreement was agreed back in 2015 with 29 different Articles. Almost all have been fleshed out, agreed upon and finalized - but Article 6 has not – given ongoing debates.

The U.S. nuclear energy sector is pushing for a proposed tax credit for existing plants to relieve financial pressure on the industry as it struggles to compete against abundant natural gas-fired generation and growing renewable output. But if that effort fails, a broad infrastructure bill in Congress includes what industry members see as more modest support for struggling nuclear plants.