U.S. President-elect Joe Biden is reported to be set to name former Federal Reserve Chair Janet Yellen as his administration’s Treasury Secretary today. Germany declared in a Nov. 20 deal that it will require companies in the country with three or more people on their boards to include at least one woman in their senior management. Last week, on Nov. 18, California’s largest utility, PG&E Corp., and its utility subsidiary Pacific Gas and Electric Co. named veteran executive Patricia Poppe as the company’s chief executive officer and to the board of the utility and its holding company. Last month, the Australian gold explorer Moneghetti Minerals announced it will take its firm public on the Australian Securities Exchange next year with an all-female board—making it likely the first firm of its kind to do so.

As the pandemic continues to challenge the status quo, women in senior leadership positions worldwide appear to be shattering many glass ceilings after years of slow progress on gender equality in business.

"We're kind of in the middle of a broader social focus on diversity," Courteney Keatinge, senior director of ESG research at proxy advisory firm Glass Lewis, told S&P Global Market Intelligence. "What I'm seeing is companies, frankly, and investors responding at a very rapid clip to some of the issues that have happened in the last several months and taking steps to try to address those."

As women’s representation in U.S. insurance and banking industries lags behind other sectors’, companies and investors alike are approaching environmental, social, and governance issues with an eye toward diversifying the C-suite.

Just seven women operate as CEOs of U.S. insurance firms, and women account for less than one-fourth (23%) of executives and officers at large insurers trading on the New York Stock Exchange or Nasdaq, according to an S&P Global Market Intelligence analysis.

"It's not just about having token numbers or ratios in the boardroom," Anita Fox, director of the Michigan Department of Insurance and Financial Services, told S&P Global Market Intelligence. "We know that when women are included that it affects decision-making—it will affect the board, and hiring of management will become more reflective of the society that we know."

Because organizations aren’t making "deliberate" efforts to accelerate women into senior leadership roles across the U.S. insurance industry, chief executive officers “should be shuffling their succession plans to make sure that there's a woman in the mix for every position," CEO Claudia Merkle of California-headquartered NMI Holdings Inc. told S&P Global Market Intelligence.

The banking industry shows similar patterns. When Jane Fraser was named in September as the next CEO of Citigroup, it was the first appointment of a woman to the chief executive position of one of the U.S.’s Big Four trillion-dollar banks and the 15th female CEO of a bank with at least $1 billion in assets. Only 32 public banks, or 4% of the industry in the U.S., have a woman at the top, according to an S&P Global Market Intelligence analysis.

"You can make up all the reasons why, but the reality is it's because of a gender bias that exists in the entire way in which all of these different systems operate," Trillium Asset Management CEO Matt Patsky told S&P Global Market Intelligence. "How you break through that and how long it takes, I don't know. Is it reasonable to get to 50% of the CEOs of big banks being women in our lifetime … I don't know."

Moving forward, the top insurance regulator in New York plans to address issues of diversity with companies, including banks.

“To the extent that we as a regulator oversee the safety and soundness of financial institutions under our purview, it's well within our prerogative to say—and we do—how are you doing on diversity?” New York Department of Financial Services Superintendent Linda Lacewell told S&P Global Market Intelligence. “Because that makes you a stronger institution, and it's of interest to us as we look at how you are dealing with all the evolving risks and challenges.”

Today is Tuesday, November 24, 2020, and here is today’s essential intelligence. 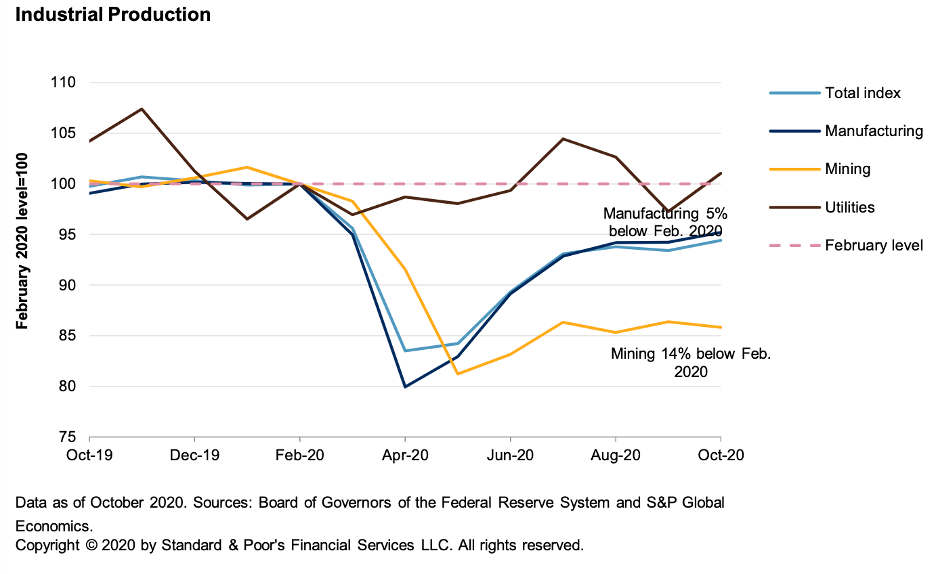 First-tier economic data for October shows U.S. industrial production, housing, and retail sales all continued to make gains. Housing starts and retail sales have eclipsed their pre-pandemic levels with a convincing V recovery, while industrial production continues to fall short but is making up ground. Estimates of overall economic activity—as measured by real GDP—point to growth in the first half of the fourth quarter. 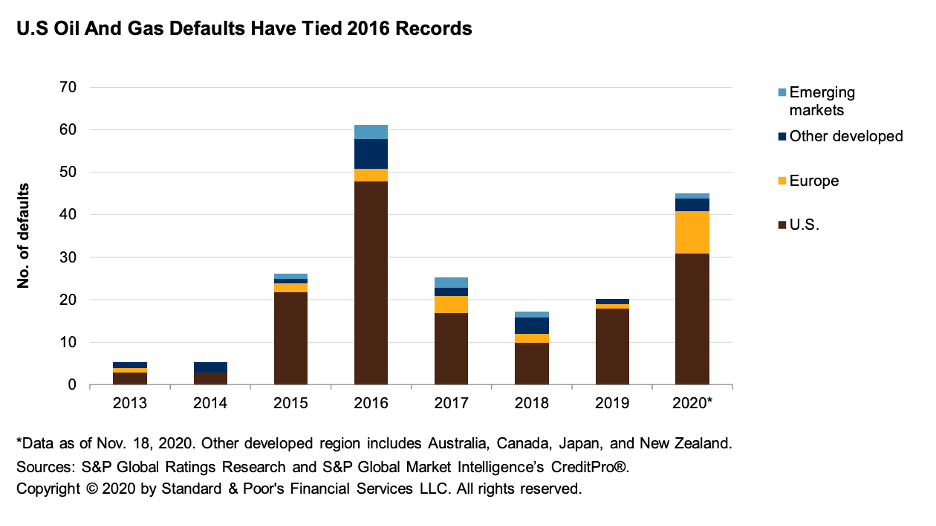 The global corporate default tally has reached 210 so far in 2020, after four companies defaulted last week. The oil and gas sector continues to lead the global default tally with 45.

Flattening The Curve—The Outlook For U.K. RMBS Arrears In The Wake Of COVID-19

The extended furlough and mortgage payment deferral schemes, along with the tactical use of these schemes by borrowers, mean that U.K. RMBS arrears will rise slower and to lower peaks than would otherwise be the case.

A sale to a bigger, stronger player would be the most obvious conclusion to the saga of troubled Banca Monte dei Paschi di Siena SpA, according to banking industry experts. 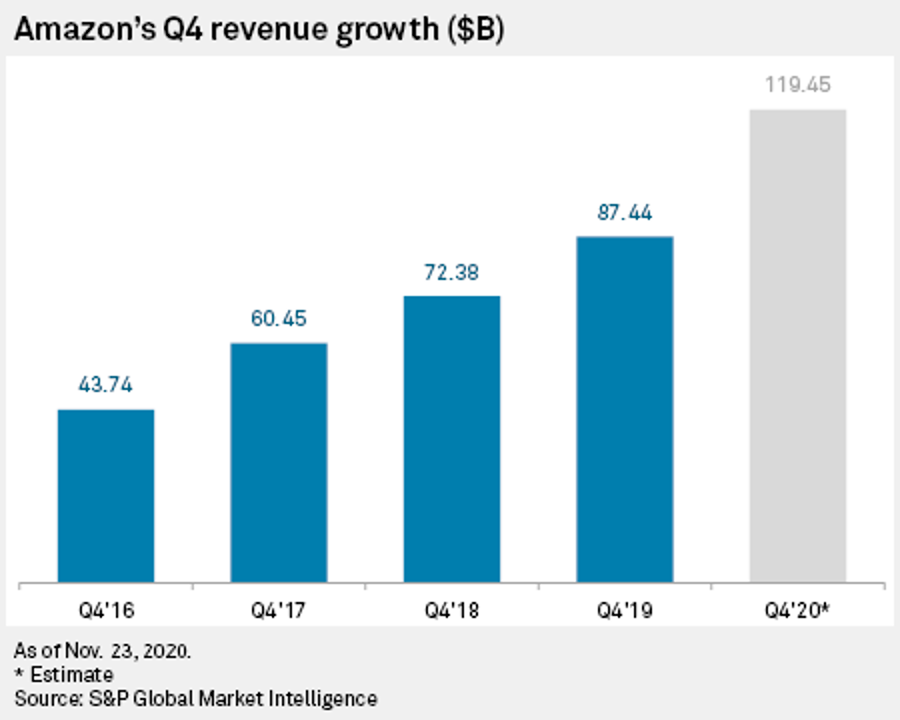 Amazon.com Inc. is bolstering its shipping efforts and growing engagement among its Prime members as the company heads into the holiday season and targets home-bound shoppers amid the coronavirus.

Softbank Plows Ahead with $5B Tech Play in LatAm

Japanese conglomerate SoftBank Corp. is set to accelerate its play in Latin America after having invested almost $2 billion in tech startups during 2019 and 2020. The SoftBank Innovation Fund recently got clearance from Tokyo to begin to use its remaining $3 billion to take advantage of post-pandemic deal opportunities.

As Threats Grow, Cyber Insurance Seen as More of A Necessity

Businesses are treating cyber liability insurance as less of a luxury and more of a necessity as larger numbers of customers are drawn into the market and existing clients seek higher coverage limits, according to Advisen Ltd. surveys. 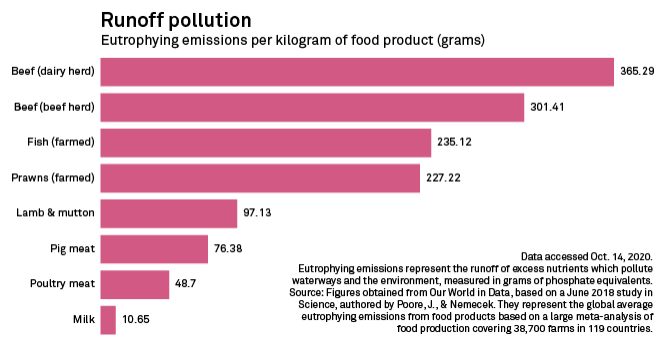 Large meat companies have become major polluters of America's air and waterways, and investors are becoming more vocal about them cleaning up their acts.

A Commodity Futures Trading Commission staff report slated to be released Nov. 23 compiles data on market activity and economic factors leading up to the negative settlement price in the NYMEX May WTI futures contract April 20, but stops short of analyzing propriety of trading or assessing whether market structures need to be adjusted by the derivatives regulator.